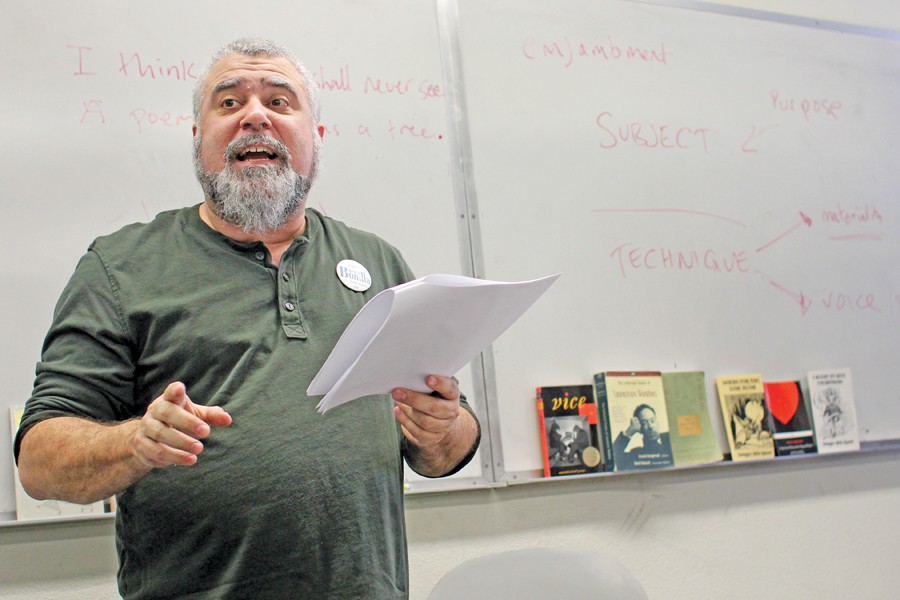 For the first time in nearly six years, creative writing is being taught at Contra Costa College.

Though the deadline to late-add the class has passed, all are welcome to join the currently unnamed creative writing club, which meets during the same hours as the class: Tuesdays from 2:10-5:30 p.m. in LA-203.

English department Chairperson Jeffrey Michels is the class professor and club adviser. He said the club is eager to put a literary magazine together, which would give students the opportunity to have their short, written works published.

Rechel William, a pre-med student seeking a career in holistic medicine, said, “This class gives students the chance for open expression without forcing them into rules and guidelines.”

Of course, the fundamentals of poetry and other forms of creative writing are taught as part of the class.

“As soon as you develop the rules, poets begin to break those rules for their art,” Dr. Michels said.

If breaking rules is not enough to entice students to join, Michels offered a few other reasons that may get students interested.

“Why should students join the club? To improve their love lives. Everybody loves creative writers,” he said. “It also cuts down on the costs of gift-giving during the holiday season.”

Michels fills the first hour and a half of the class with dramatic readings and a lecture about that day’s material. Then, the students in the tandem class and club are given a good chunk of time to write and get creative juices flowing before the class concludes with sharing and a short discussion.

“I took English 1B with (Michels) in the past and it was a fun class. He’s got an alternative teaching style and I really like that,” William said. “He influenced me to put more things down on paper and get them out of my head.”

Criminal justice major Osbaldo Murguia said Michels is a cool and funny professor who has an apparent passion for what he is teaching.

“I took this class to further my knowledge of speaking and better organize my thoughts,” he said. “I tend to get garbled easily. I thought this class would help.”

Though students find having a creative writing class and club  beneficial for the campus community, some were concerned about the class not being offered the past six years. Students expressed worry over the possibility of cancellation due to low enrollment.

“It has been historically difficult to get a lot of students into this class,” Michels said. “There’s always a steady handful that sign up. But teaching this class also requires a great deal of recruiting, something I haven’t had enough time to do in past semesters.”

As Michels assures, this class and club are definitely active.

William said she has finished all of her transfer requirements and is taking creative writing for fun. It is a class she said she waited many semesters to be offered.

Michels said, “(Students in this class/club) are learning how to communicate vision, and that’s priceless. Finding your voice is part of what college is.”