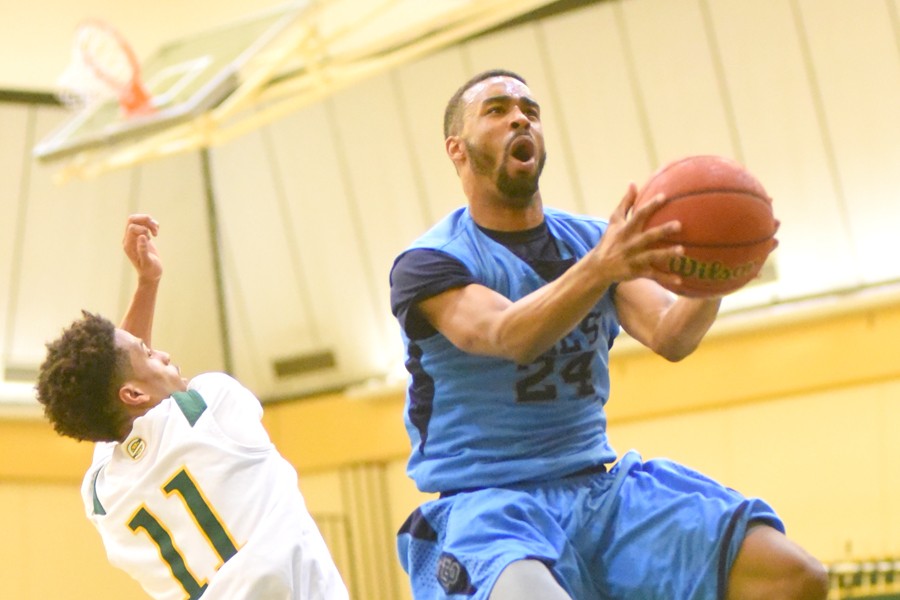 Comet forward Justin Johnson jumps for a lay up during CCC’s 82-69 win against the Storm at Napa Valley College on Friday.

NAPA — The men’s basketball team spoiled sophomore night for the Storm with an 82-69 win, yet missed the playoffs for the second year in a row, in its final  game of the season on Friday.

Despite Napa Valley College’s (13-14 overall, 8-8 in the Bay Valley Conference) inside presence and early lead at home, it was humbled by the speed of the Contra Costa College (14-12 overall, 11-5 in the BVC) players as both teams encountered each other for the second time in the 2015 season.

The energy radiating off Comet sophomore forward Justin Johnson, however, was the push CCC needed.

“I don’t really remember most of the game,” Johnson said. “I just wanted to win and try to get to the playoffs.”

Johnson registered 23 points and seven rebounds, outpacing the 15 points and four rebounds he put up in the first game, to vault CCC past the hot-handed home team that came into the contest riding a five-game winning streak.

Even with the Comets’ victory over the Storm, it was not enough for the squad to receive a berth in the California Community College Athletic Association Regional Playoffs.

On Friday, the Storm struck suddenly, hitting their first 3-pointer less than 15 seconds into the game.

Slashing lay ups by Johnson and a floater by Byron Buckley, who went for seven points and eight rebounds, kept the Comets close, although the team had a hard time matching Napa’s big men at the onset.

CCC could not get a stop after tying the game with another Johnson lay up. Two more Comet turnovers, however, gave NVC a momentary 27-21 lead with eight minutes left in the half.

Phil Secrease, who finished with seven points and eight rebounds, blocked a Storm shot that led to Jebraille Newkirk’s penetrating dribble and lay up, which seemed to ignite the CCC defense and transition game.

Newkirk, who ended the game with seven points and six rebounds, stripped possession that led to another Johnson lay up shortly after.

“We knew our season was on the line,” Newkirk said. “They had nothing to lose and they knocked off two of the top teams recently so we knew they were coming for us.”

While the Comets were unusually careless with the ball early in the half, they used a full court press to fight back into the game. The squad took its first lead of the night with three minutes to play before halftime.

“(Coach Miguel Johnson) called a timeout to get everyone back on track with the game plan. We came out soft and (NVC) played like they wanted it more,” Comet assistant coach Ivan Allison said. “We felt like if we were going to make the playoffs it wouldn’t be with a lack-luster performance like that.”

Tajai Johnson, racking up 12 points and five rebounds, hit a short jumper to give CCC a two-point lead at the break to make it 39-37.

With its playoff hopes on the line, the team settled into the moment after halftime. The Comets came out moving their feet on defense and swinging the ball to find the open man on the offensive end.

A no-look pass by Dawson Johnson to Secrease extended CCC’s lead to seven after the and-one free throw.

The three-point play was followed by a nifty pass from Pekelo McKenzie, who finished the game with eight points and went 2-2 on 3-pointers, to DeAndre Russell.

McKenzie hit a 3-pointer on the next trip down after a Comet stop on defense to give the team a 67-55 lead with six minutes remaining in the game.

After a succession of quick shots and misses for CCC, Napa was poised to capitalize. The Storm turned the Comet errors into an 8-2 scoring advantage, which brought NVC within sight of a possible comeback at 69-63.

The Comets, however, held strong by making a series of defensive stops. The squad hit the deck for loose balls and chased down errant rebounds in route to capturing nearly 50 rebounds compared to just 40 in the previous match-up against the Storm, quite an improvement.

A late Buckley 3-pointer helped the team keep its playoff hopes alive and escape with an 82-69 victory.

“Its not just the stats or your place in the standings, there is a lot that goes in to getting a playoff spot without winning the conference outright,” coach Miguel Johnson said. “There is also an appointed representative from every conference, so there is a little of the human element involved.”

The  playoff selection process is discussed in  a  24-minute CCCAA video on YouTube.