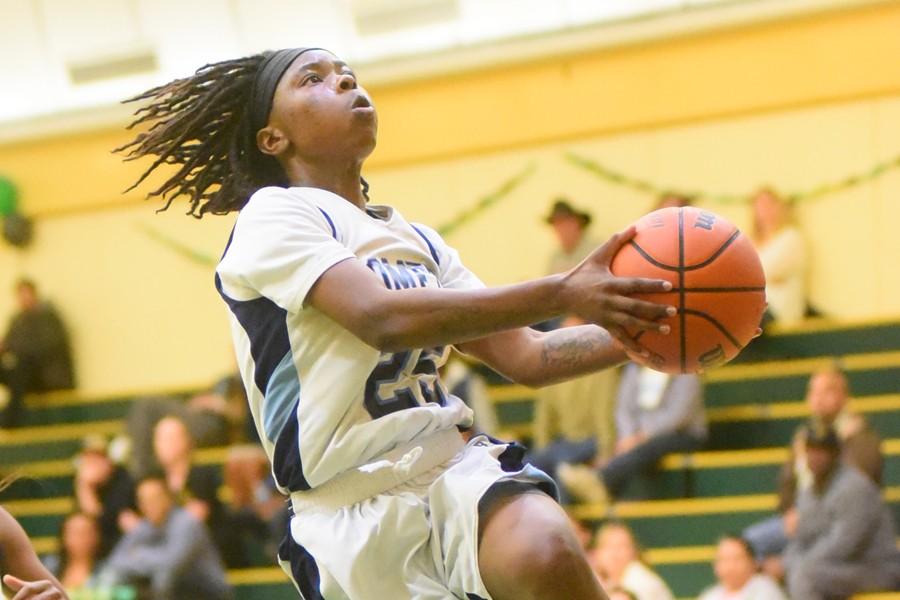 Comet guard Ahjahna Coleman leaps for a lay up during CCC’s 66-56 loss to the Storm at Napa Valley College on Friday.

NAPA — The Comets missed a late opportunity to gain ground in the Bay Valley Conference losing 66-56 in their final game against Napa Valley College on Friday.

Contra Costa College (13-13 overall and 10-6 in the BVC) controlled the pace and the scoreboard early, but as the squad’s shooting went cold so did its lead.

The Storm (18-11 overall and 10-6 in the BVC) capitalized on Comet turnovers, scoring consistent shots in or around the paint.

“It’s a tough place to play. We have struggled up there before,” Comet coach Paul DeBolt said. “The biggest thing is that we just missed shots.”

Ahjahna Coleman and Jacqie Moody paced the scoring for the Comets as usual. Coleman (19 points, six rebounds, five assists and five steals) and Moody (20 points, 18 rebounds and one block) kept the squad in front until NVC tied the score shortly before the half.

Crisp ball movement led to a Coleman 3-pointer to put CCC on the board after a quick Storm strike to open the game. Moody’s lay up and subsequent foul, followed by two more Moody free throws, allowed the Comets to recapture a momentary lead.

A steal and a floater kissed off of the glass by Comet guard Daizah Pounds (four points, six rebounds) gave the team a three-point lead and control of the game’s early momentum.

“Maybe because it was their last game and sophomore night it served as a catalyst for their momentum,” Pounds said. “We had a hard time matching their energy.”

Although it was sophomore night for the home team, the Storm could not match the Comets intensity. NVC remained in the game by taking advantage of the bountiful CCC mental mistakes — like fouling on a made free throw while in double bonus.

The squad hoped to squeak into the playoffs with an ultimate win for the 2014-15 season. The CCCAA uses a five-point criteria in determining playoff eligibility.

This process takes into account a team’s conference strength by reviewing standings and its winning percentage against quality teams using a non-conference Ratings Percent Index (RPI).

The Storm finally tied the game at 20 shortly before the half. Comet turnovers gave way to NVC taking a six-point advantage. At halftime Napa led 28-22.

After intermission, the Storm built on their late first half momentum and stretched a six-point lead to 11.

A powerful Moody block led to Comet scoring on the other side to bring the score to 33-25, putting the squad in single digit range to close the deficit since the start of the second half.

Another steal by Pounds brought hope back to the team but failing to turn the swipe into points gave the Storm a chance to get the lead back up to 10 points.

Even when the Comets attempted to build on a forced turnover or chance to push the ball, un-forced errors practically handed NVC points and siphoned the life from the visiting team.

CCC did not have a good shot out off a crisply run offensive set in the second half until Carol Oldan (12 points) hit her first of back to back 3-pointers, which were inspired by back-to-back Coleman steals.

A slashing Coleman drive and dish to Moody staggered the Storm, but the Comets could not get a stop when they needed one and they promptly gave up a 3-pointer on the next trip down the floor.

As the CCC playoff flame flickered, play got rougher and frustration started to set in for both teams. Moody and Storm player Chrysta Ray were each given technical fouls for exchanging pushes and verbal darts with 42 seconds left in the game.

“I remember fouling her on the play, but nothing too hard,” Moody said. “She said something to me, I really don’t remember what it was. I said something back and it went from there.”

Briah Davis and Christiana Onwuasoeze were both ejected for leaving the bench area during the ruckus.

Emotions were eased before the last seconds of play resumed and the Storm held onto their 66-56 victory.