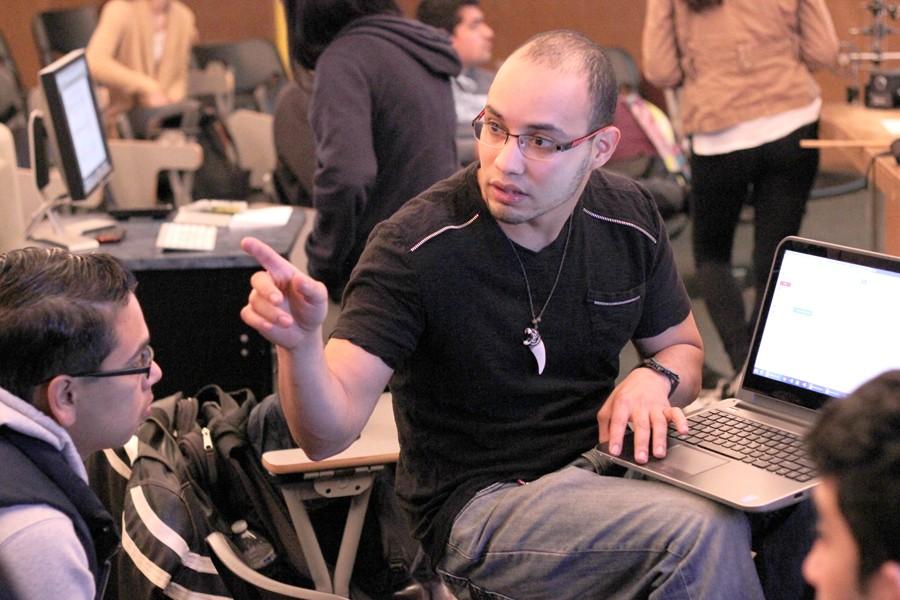 Society of Hispanic Professional Engineers Vice President Christian Talavera speaks to potential members during their club meeting in the Planetarium on Thursday.

The Society of Hispanic Professional Engineers looks to uplift, empower and assist students by providing resources and encouragement.

The campus’ new club has a mission to provide its members with resources and a support system, so that they may branch out and fulfill their goals. One current focus for the club is to provide students with scholarship and internship opportunities, as well as assist them with the process of applying.

Aside from one-on-one help and information provided during meetings, SHPE also encourages and makes it possible for their members to attend conferences. These conferences can help with networking, one of SHPE’s main goals for its members, and provide added encouragement.

Many inspirational figures can be found at these events, such as the club’s last conference provided. The trip to Detroit, completely funded by Science Technology Engineering Mathematics, (STEM) was host to the real life roles of the men who inspired the recently released movie “Spare Parts”. The men shared the struggles of being undocumented, with huge aspirations, and the triumph they had worked to complete.

SHPE allows members to feel that they are professionals in the making. Members have business cards made for them, which can be given out during conferences or other events, SHPE coordinator Kevin Hernandez said. There is much emphasis put on networking and communication.

Although the club includes the word “Hispanic” in its title, it is not limited to any one student group. Anyone interested, particularly those working toward a STEM major, will be welcomed. The club’s meetings are held on a weekly basis on Thursdays, beginning at 11:15 a.m., in the Planetarium.

Along with help on an educational level, members can be part of a network that will mentor them and even create a family for them. The group members assist each other with classes and celebrate one another’s accomplishments.

“Those classes are not easy and it helps to have group members mentor you,” SHPE President Valeria Avila said.

The club was able to help her through her difficulties, so she wishes to do the same with others, Avila said.

The club’s focus on Hispanics was created with the intention of uplifting students in the Hispanic community and providing them with the confidence needed to achieve their goals. Often times these students do not have the necessary guidance or means of resources. The family is often unable to help because they were not able to finish their schooling and know little about how it all works, Avila said.

“The dream of being an engineer is so distant that people feel like they cannot achieve it. We want to make them feel that it is possible,” SHPE vice president Christian Talavera said.

The employment that comes to mind when people think of Hispanics is domestic workers, Talavera said. However, at his first conference Talavera witnessed Hispanic professionals who were nowhere near that stereotype.

“This is how I want the world to see Latinos. We don’t have to be part of the norm. I saw the future and that is our future,” he said.

There is great motion in effect to increase the awareness of STEM majors and the participation of Hispanics and women. Through participating in all that the club has to offer, its leaders were able to see a growth in motivation, and renewed energy, among members.

Even upon leaving Contra Costa College, members will not have to fear losing their support group. SHPE is a national organization with chapters in schools around the country on an undergraduate, graduate and even on a professional level.

The club also wishes to reach out to the communities outside of the college, through community service and providing encouragement to the local youth.