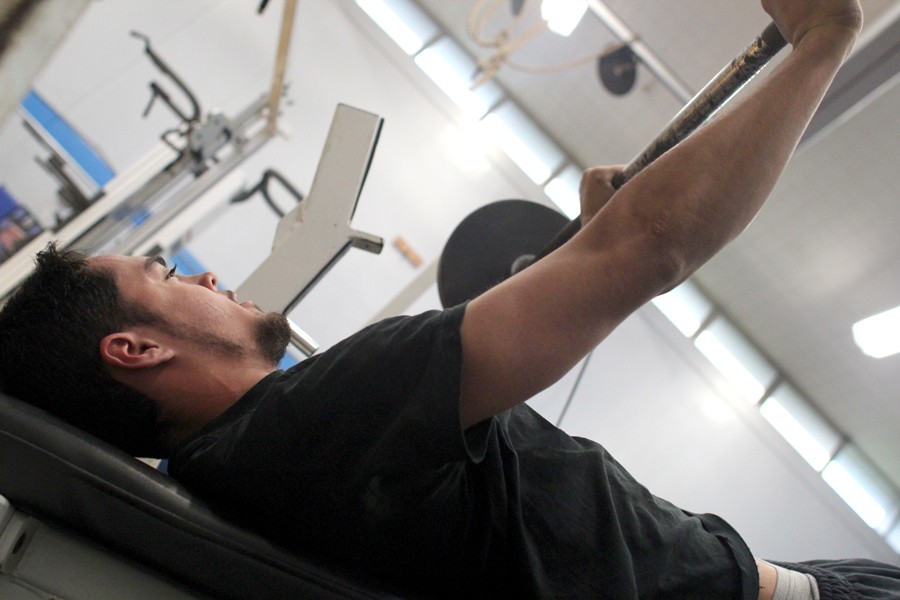 Psychology major Sean Harris does a rep on the bench press in the Fitness Center.

The Fitness Center, located in the Gym Annex Building, is a place on campus where athletes go to preserve peak physical condition for the field and also where students go to fulfill their gradation requirements.

In any respect, the room was never meant to accommodate both needs. Originally the weight room was on the upper floor of the GA Building, an area that has since been converted to classroom space.

“It’s not realistic from a competitive standpoint,” Contra Costa College football coach Alonzo Carter said. “We have to compete with teams that have a physical advantage. They have complete weight rooms. We don’t even have dead lift stands or squat racks.”

CCC students agree with the coaches that the athletes need a separate training space.

“I don’t mind the athletes being here, I just don’t go to their side because I feel like I’d be in their way,” physical education student Joslyn Diaz said. “The room just needs to be bigger. I feel cramped in here. Sometimes and I have to wait for equipment to get free.”

Carter and men’s soccer coach Nikki Ferguson agree that the best solution would be to add an upper level to the room. The lower half would be for weight training and the upper would be for cardio.

Yet, other than money set aside years ago for the new elevator and out of compliance ADA doorway, no money will be put toward refurbishing the GA Building until Measure E funds are released.

“The Measure E funds are a long way out,” Athletic Director John Wade said. “It’s not just something for this school, it’s districtwide. Schools have to lay out what they propose to use the money for, then the district decides how to disperse the funds. It’s not even clear who gets how much yet.”

Given the current reality that athletes and students have to make due with what they have, the department has upgraded much of the cardio equipment in the Fitness Center.

Ferguson said strides were made in the last two years with $15,000 in upgrades made to the cardio equipment. Five treadmills, three exercise bikes and four elliptical machines were purchased because the warranty ran out on several pieces of equipment in 2012.

“When we got the new cardio equipment students were excited,” he said. “The new equipment makes a bad situation better, but in no way makes it right.”

Ferguson said the heating and/or air conditioning unit has not worked in recent memory of anyone that frequents the Fitness Center, student or faculty. This allows stagnant air to fill the room. The door configuration does nothing to promote air circulation, even if both doors are open.

The non-industrial grade fan placed in the doorway does little to help, he said.

In the Athletic Training Room,  located in the Men’s Locker Room, trainer Mikel Jackson frequently wipes down his equipment and tables with Super Sani-Cloth. These are disposable germicidal wipes that kill bacteria, viruses, blood borne pathogens, TB and pathogenic fungi.

Jackson said a byproduct of the standing air is the dust and dead skin left to accumulate over many of the surfaces in the room. The custodial crew comes in at night to take out the trash and sweep the floor, but the majority of the disinfecting is left up to students.

In contrast, Diaz pointed out a sports drink spill on an elliptical machine that had been there for days.

“Given all that’s going on with staff infections and measles there should be daily cleanings done by students and the night crew,” physical education department Chairperson Miguel Johnson said. “Monitoring should be done by their superiors, there needs to be a system of checks and balances. Someone should be held accountable if it’s not clean.”

Sharonda Jones does her part to try and keep the equipment germ free.

“Coach Ferguson keeps a bottle of cleaning solution behind the counter and towels to wipe the equipment down. I wipe down anything sweaty,” Jones said.

Aside from the cramped quarters, untamable temperatures and less-than-desirable cleaning techniques, there are other issues surrounding the facility plaguing average students.

The irregular hours make a tough situation harder for working students looking to squeeze time into their day to use the Fitness Center.

“The Fitness Center should be a service to students like the Library and Learning Resource Center is. Nobody would think of closing the CCC Library from 11 a.m. to 1 p.m. like the Fitness Center is,” student Shakayla Adams said. “It’s hard enough to adjust your schedule to meet class availability. So 9 until 11 a.m. and 1 until 4 p.m. isn’t enough accessibility.”