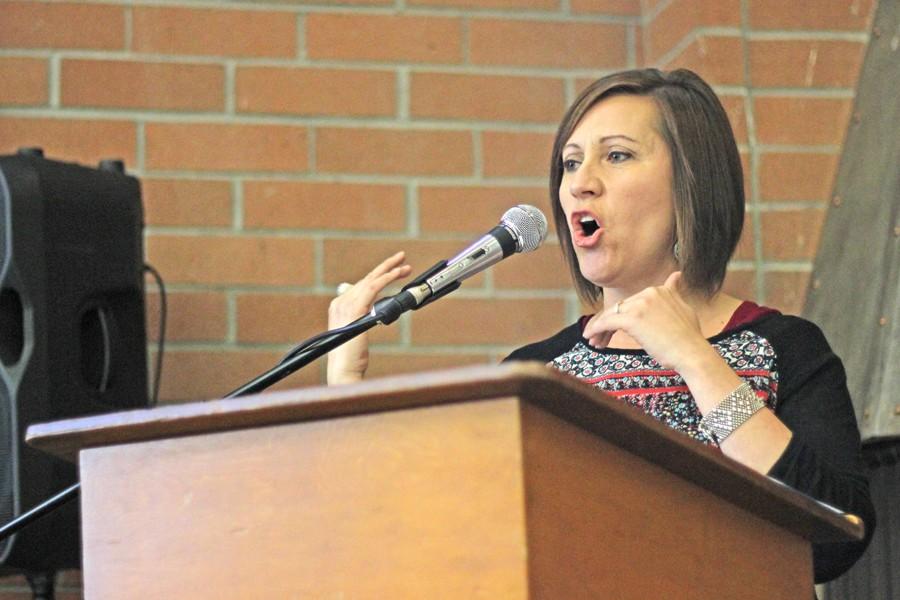 Counselor Norma Valdez-Jimenez recites a poem of hers during the open mic event held in the Library and Learning Resource Center on Feb. 24.

Students expecting to study in the usual quiet confines of the Library were interrupted and entertained by oral interpretations of written works on Feb. 24.

The faculty poetry reading and student open mic hosted the works of six faculty members, which in turn garnered the participation of six students who signed up and presented on the spot.

The event, a joint effort by Library coordinator Andrew Kuo and English professor Jeffrey Michels’ Creative Writing class, was largely regarded as a success, drew a sizeable crowd of 50 or more and will certainly not be the last event of its kind hosted at Contra Costa College.

“These types of events are significant because a lot of people go to class and do not participate in a meaningful way,” history major Rose Cowens said. “But here (students) stand up and get to be the event.”

Though Cowens admitted she attended for extra credit in one of her classes, she said that she was interested to see students read their works publicly and that the event was quite entertaining.

“You hear things you wouldn’t normally in a school setting,” she said. “It’s fun to see. I’m into it.”

“These types of events give students the chance to connect with one another and get different perspectives,” he said.

Turner, a young poet who said he seldom shares his work, felt revamped and inspired after shaking his jitters, taking to the stage and reciting a love poem to the audience.

He dedicated the piece to counseling department Chairperson Norma Valdez-Jimenez, who he told the audience had inspired him to read his poem aloud that Tuesday afternoon. Turner said he was very nervous about reciting his poem to a live audience, but overall enjoyed the experience and said he would definitely do it again.

“After coming to this, yeah, I’d do it again,” he said. “Being on stage is always energizing and seeing the work of others is encouraging.”

Valdez-Jimenez found the event enjoyable and pertinent in that it fosters students’ creative processes and encourages their active participation, she said.

“How else do you learn an art without having a place to practice at?” she said. “I would love to see more student-driven activity on campus like this event.”

Valdez-Jimenez said that while faculty have ideas for what might interest and engage students, it is the students who truly know what they want.

Though she enjoyed hearing her colleagues present their works, she said “the students were the most exciting part.”

Kuo said the idea to host this event in the Library came to him sometime last semester.

During fall 2014, he said he began discussing the possibility of a live creative writing and poetry reading with various faculty members who he knew enjoy to write in their free time.

“I write poetry and I work in the Library. I wanted to put the two together,” he said. “Hopefully it gets students excited about literature and writing.”

He said that he is considering hosting the same event again, but not until the fall 2015 semester.