March in March survives despite lack of support, funding 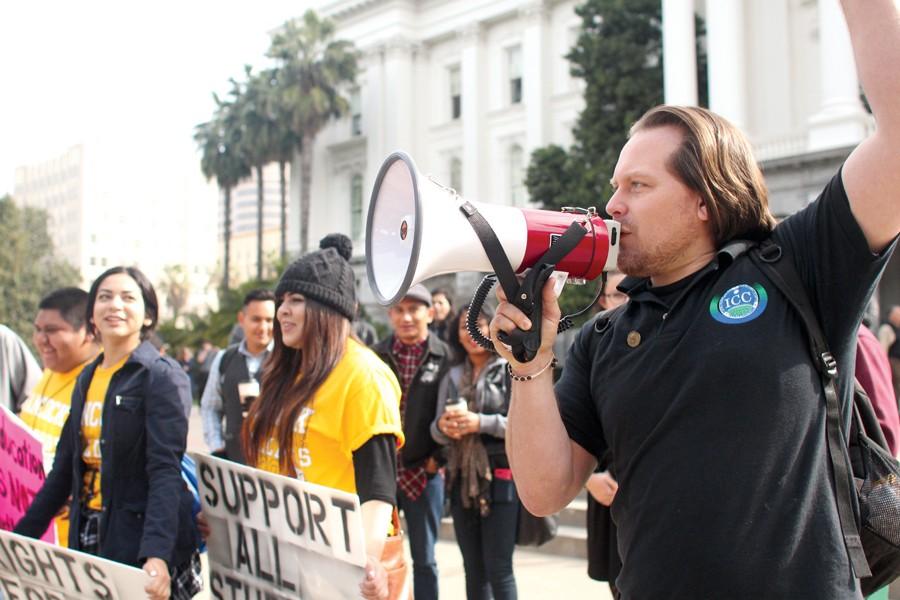 SACRAMENTO — During this year’s March in March student participants proceeded to stand their ground as a lack of funding and support kept the annual protest from drawing a large crowd.

The small group in attendance was forced to galvanize around the cause and continue the procession to the state Chancellor’s Office.

“We didn’t have the funding, so there was no official march,” San Bernardino Valley College student Jason Martinez said.

Martinez participated as one of the lead organizers of the impromptu march after finding out the planned march was canceled due to lack of support from legislatures.

“We didn’t like the idea of March in March with no march,” he said.

The Student Senate for California Community Colleges (SSCCC) organizes the March in March annually to empower and educate community college leaders while taking a stance on educational issues.

“The turnout was deplorable,” Montes said. “We lost a lot of support in advocating to bring the march back.”

With the lack of support, discouraged students returned home.

But those who felt inspired shared with the participating group what they so support.

He said to make a bigger impact there needed to be more student participation, but with the number of students present, the event allowed for networking opportunities among other community college leaders.

Regardless of the official march’s cancellation, a diverse group of students from different walks of lives remained to support one another.

The LGBT community was present chanting “trans lives matter,” while encouraging others to take part in their cause.

“If our government is not there for us, they need to step aside,” American River College student Barbara Fowler said.

Fowler is a person with a disability. She participated in the march riding an electric wheelchair and holding a sign that said “No more $200 textbooks!”

“Students united will not be divided” was one of the sayings student participants chanted as they walked through the streets of Sacramento heading toward state Vice Chancellor Paul Feist’s office.

Feist listened to students expressing their thoughts and opinions. He said he appreciates listening to the students’ powerful messages.

CCC interim Student Life Coordinator Ericka Greene said,  “It gives students the opportunity to take on a leadership role and become an activist — to use their energy in a positive way.”

The power and drive of the students made it possible to maintain a common goal in mind at the event.

“The 2.1 million students (in California community colleges) can be a force of power,” state Vice Chancellor Denise Noldon said.