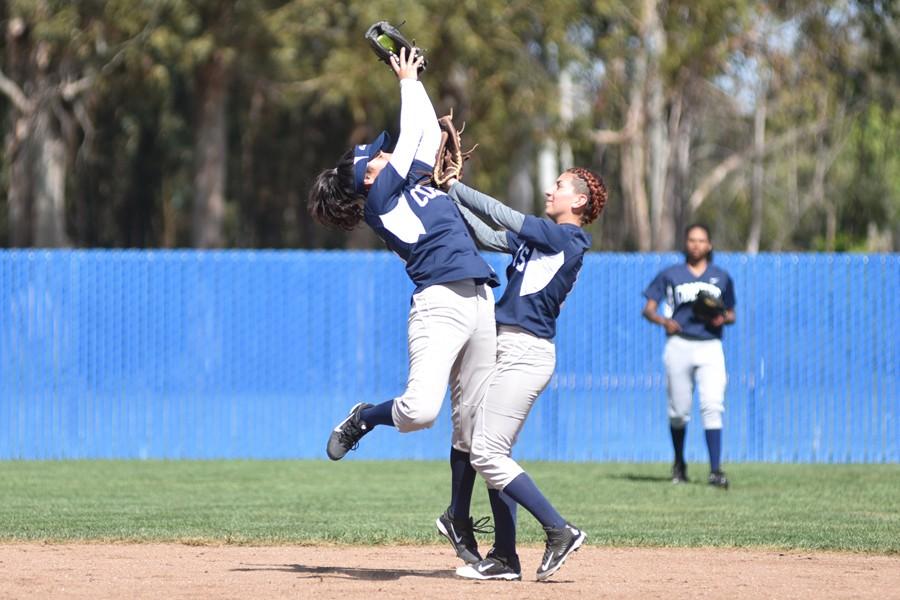 Comet softball players Angelica Espinal (left) and Melissa Watkins collide after a successful catch during CCC’s 17-4 loss to the Falcons at Solano Community College on Thursday.

The softball team faced off against Solano Community College at the worst possible time for the squad, losing both games of a doubleheader 13-0 and 17-4 to a red hot Falcon team on March 12 in Fairfield.

The Falcons (14-6 overall and 6-0 in the BVC) came into the game on an eight-game winning streak, extending back prior to their conference opener.

The Comets (0-16 overall and 0-6 in the BVC) have yet to win this season, and the team is searching for that elusive first victory.

“We are getting better. We just need to be more consistent,” CCC first base- man Alexus Daily said. “In the second game we communicated better as a team and made better throws in from the outfield. We just need to have more confidence at the plate.”

The Comets return to action Thursday to take on the Storm at Napa Valley College. It is an afternoon doubleheader, with 1 and 3 p.m. start times.

Comet starting pitcher Cicily Ragsdale was facing a monumental task as the first place Falcons are currently playing their best ball of the season.

SCC is coming off of a 19-4 drub- bing of third place NVC and before that the Falcons put up 47 unanswered runs against De Anza College during a doubleheader on March 7.

Ragsdale gave up nine runs in the first inning of game one, but settled in to only give up four more runs after the damage was done.

“They had a tight strike zone for Cicily in the first game,” Comet short- stop Angelica Espinal said. “Solano had a lot of runners getting on base on walks and (advancing on) steals.”

Comet third baseman Rogell Ryan was injured on an attempted tag out of a stealing base runner.

As Ryan swiped down for the tag, the runner’s spike rammed her ankle, rolling it inward, forcing Ryan to sit out the rest of the game.

After dropping the first game 13-0, the Comets sent Daily to the mound to face the Falcon offense in game two. The pitcher gave up half as many hits as Ragsdale but the Comets committed four fielding errors.

“I’m looking to keep my composure on the mound,” Dailey said. “You can’t control everything that happens out there, so I just have to let things go.”

The injury to Ryan in the first game affected the whole team, and with her absence, the bottom half of the lineup found a way to put the bat on the ball to come away with three of the team’s four RBIs.

“We walked people in the second game but that wasn’t really the issue,” Ryan said. “The Solano players kept finding ways to hit the ball into the gaps to keep the runners moving.”

The Comets held the Falcons below their 14.8 runs per game in the first 13-0 loss. However, the squad failed to duplicate the feat during the second game, and lost 17-4.

“Solano was a tough game,” Comet softball coach Karolyn Gubbine said. “I’m happy we stuck in there and generated runs by any means.”