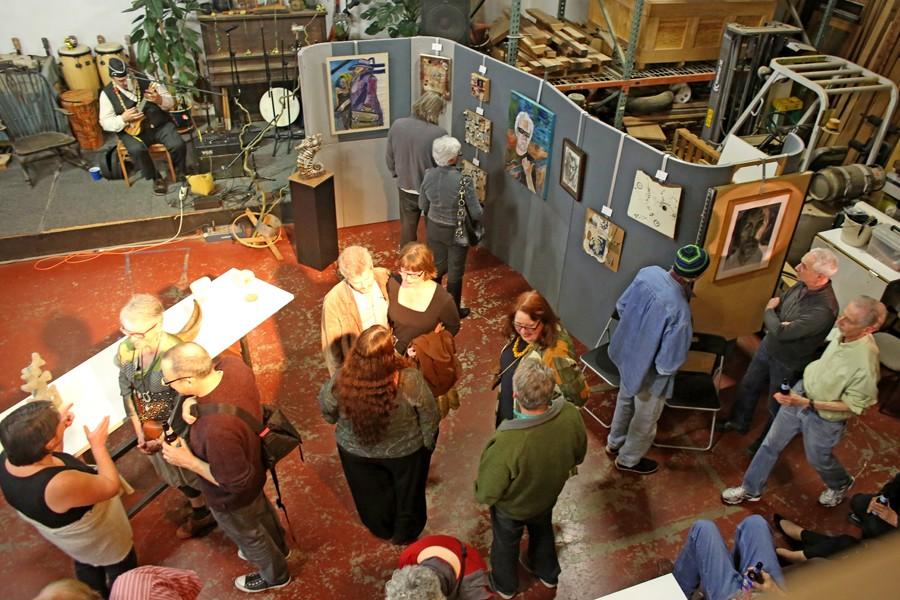 BERKELEY — A one-night monthly art gallery and artist gathering is taking shape in the historic Sawtooth Building, where its second ever meeting Friday night turned out a congested success.

The Berkeley Art Party reflects the joint effort of sculptor Barbara Stevens Strauss and ukulele maker Michael DaSilva, who dedicate their studio — the DaSilva Ukulele Co. — to artwork and the inter- mingling of artists and community members from 6:30-9:30 p.m. every second Friday of the month.

“We are trying to generate com- munication between local artists of all types and do so in a venue that is upbeat to present people’s work in,” Strauss said. “We also do it to get inspiration from one another. It is a side benefit if we sell any work.”

Strauss’ work is currently featured on Contra Costa College’s campus in the Eddie Rhodes Gallery exhibit “Texture Times Two” in the Art Building, and will be until the end of the month.

At the Art Party, while guests trickled in and out that evening, an average of 20-30 people occupied the space at any given time.

Each Art Party features the works of four artists. All artists in the area are encouraged not only to

attend, but to contribute as well. “Sharing the space is really important,” DaSilva said. “A lot of these artists don’t have a venue to present in, or don’t have the money to rent out a space.”

The exhibit drew an assorted, albeit aged, crowd. While few college-aged adults were in attendance, the majority of guests had first-hand knowledge and art-themed anecdotes from life in the 1960s.

All ages are welcome, there is no admission charge and parking can be found with ease outside along Eighth Street, or the offshoots at either end of the building, Dwight Way and Parker Street.

Brady and Ultan contributed wall-mounted pieces in a variety of mediums, from ink, pencil and paint to mixed media. Lobykin and Storm brought sculptures that were easily distinguished between materials and styles, adding to the diverse array.

Storm, owner of Bad Squirrel Pottery in Oakland, had a striking seahorse named “Cosmo” on dis- play. The light colored glaze applied in various consistencies to the dark clay created an effect like bone in the areas where the glaze was thickest, while creating contrast in the thinly glazed, darker areas of the sculpture.

She also had a large rendition of the elephant-headed Indian god Ganesh on display, as well as small ceramic bowls she made with hand- woven, glazed pine needle tops.

“Artists are so focused on their own work in the studio. Events like these get them out of the studio and talking to one another and to people in the community,” Storm said. “It keeps artists from working in a vacuum. It gets you connected to people and to reality.”

On a nearby table sat the sculptures of Lobykin. A plant-like tendril cast in bronze lay in the center amid platformed and freestanding sculptures of organic quality. These pieces used handpicked and carved beach stones to different effects, some permeated by metallic veins and shapes.

“I used natural shapes as a base, then put in these man-made intrusions,” Lobykin said. “I wanted to represent harmony and coexistence within nature. We abuse nature as humans and I wanted to show that there can be balance.”

Despite the four-artist limit per Art Party, Tom Russell, Berkeley resident and owner of Taurus Designers and Builders, found the variety of art among Friday’s featured artists to be “fascinating” and diverse.

Russell said he was particularly fond of the mixed media wall hangings by Brady, which used different boards as bases stuck with a range of materials, including crinkled and decorated paint tubes, nails and buttons.

“I really like these (mixed media) pieces. In a way they remind me of building,” the Bay Area-based architect said.

“There are all these three- dimensional pieces, buttons, nails and pins that work together to support the art, like how the pieces of a building support its overall structure. It’s very interesting.”

Polite discussions of life, art, local history and artistic motivations were held over glasses of wine and craft brewed beers. A large spread of hors d’oeuvres was there to sate any mouth craving sweet, savory or salty.

Refreshments were either brought by guests for their own consumption, or donated to the event, Strauss said.

“I like (the one-day, pop-up gallery idea) a lot, but it’s not the best for display,” Russell said. “The lighting isn’t great. Fluorescent lights hanging 30 feet above our heads just doesn’t cut it.”

Strauss said, “We have yet to get spotlights. We’re still evolving this thing.”

“I like to mix it up between media, whether 2-D or 3-D. Two of each is the current formula,” Strauss said.