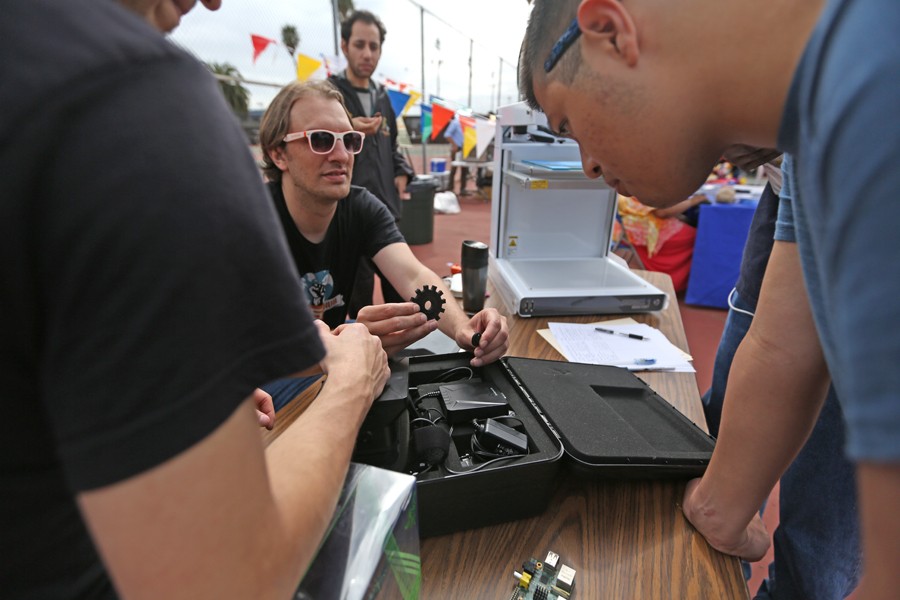 Gaming Guild President Eric Gambetta-Guglielmana showcases a gear from the club’s equipment case to an interested student during Club Rush at the Tennis Courts on March 11.

The annual Club Rush event was held March 10-11 and while it did not draw in as many students as previous years, campus clubs were still able to inform some of the student body what kind of clubs are available.

“Out of the 19 active clubs on campus, 12 of them participated. But the ICC still gave out information on the clubs that were missing,” Inter-Club Council President Safi Ward-Davis said. “Between the two days we had 326 students sign in and receive raffle tickets, although I feel we were closer to around 400.”

The modest turnout was attributed largely to having the event hosted at the Tennis Courts, away from the majority of campus buildings and classrooms.

Associated Students Union President Antone Agnitsch said, “Normally the location of Club Rush is in the center of the school, which is currently under construction. Last year’s Club Rush was held in the alleyway behind the (Liberal Arts) Building and held a crowd of people similar in number.”

Engineering major Diego Garcia said, while the event was organized, not enough people showed up.

“I’m sure the food helped draw people in, but this is too separated from the rest of the school,” Garcia said. “I feel like nobody realizes it is going on over here.”

“The space is nice, but too far away from everyone,” he said.

“We’re here fundraising and trying to spread the word as to what Puente can do for students,” Vega said.

The ASU reached out to the student body through fliers, social media and email blasts sent to student emails.

“I’d like to hold smaller events out here in the Tennis Courts more regularly so students can come to expect it,” he said.

One competition rated clubs on the number of signatures they obtained during both days of the event.

The first place club in the competition would receive $200, with second and third places taking $150 and $75, respectively.