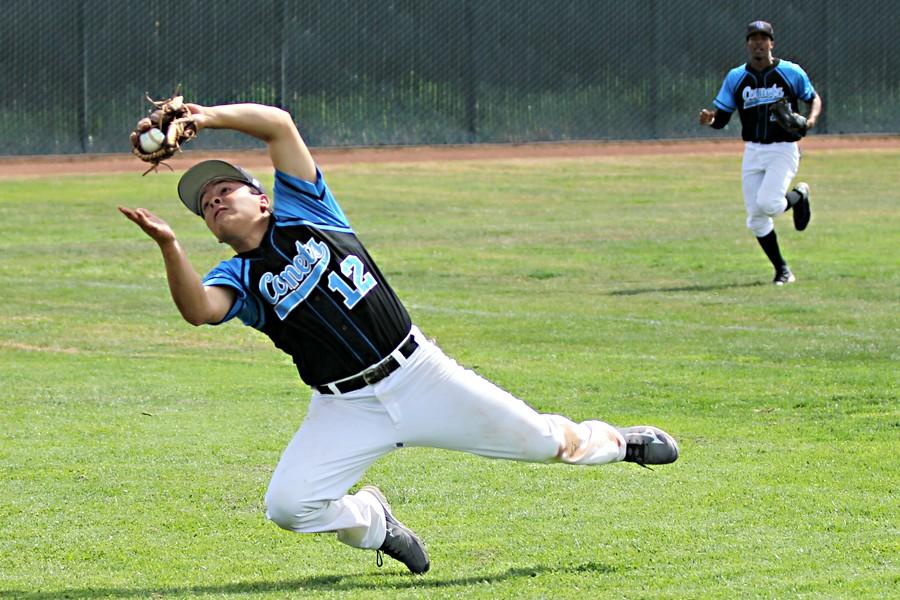 After a wild 16-13 road loss on Thursday, the Comets lost their second straight game against Folsom Lake College 9-7 on Saturday when the bullpen gave up seven runs in the ninth inning at the Baseball Field to force extra innings.

Starting pitcher Allen Ressler was spectacular for the Comets through eight innings giving up no runs, five hits and striking out eight Falcon (15-9 overall, 7-5 in the BVC) batters.

Ressler struck out the first three batters to begin the game and said he was not “gassed” entering the ninth inning with his team leading 7-0.

“They adjusted well and Folsom is a good hitting team as their record shows. In the ninth I was just throwing balls straight down the middle,” he said. “We don’t have a deep bullpen and I was just following the coaching staff’s decision to (have me) pitch the ninth.”

After Ressler allowed the first three batters to reach base, he was pulled for reliever David Gustafson.

With no outs and the bases loaded, Gustafson walked the first batter he faced to send home a Falcon base runner and leave the bases jammed. With Gustafson on the mound, the Comets gave up four runs, three attributed to Ressler, before he too was pulled from the game for Comet closer Antonio Straughter.

Folsom Lake College still had the bases loaded without any outs and went on to score seven runs to tie the game and force extra innings. In the 11th inning the Falcons scored two runs and held the Comets in the bottom of the inning to seal the win.

The bullpen pitchers could not close out a victory on Saturday after Sadler had his worst game of the season on Thursday, giving up eight earned runs in three innings pitched.

Gustafson refused to comment after the loss, but Straughter said he felt more pressure closing out the game on Saturday than any so far this season.

“I didn’t even get a fair chance to warm up,” Straughter said. “The bases were loaded and I just felt all this weight on my shoulders to get the win. We don’t have pitchers to help in long relief situations. I’m not making excuses though. I just couldn’t get the job done.”

Comet second baseman Antonio Nobriga said the shallow bullpen is the main reason the team has lost four straight, hurting their chances of reaching the playoffs.

“We need to win all these games coming up and it seems like one little play always (causes) us to lose,” Nobriga said. “Our team just can’t throw a variety of pitchers (starters) in there because we don’t have them. Straughter has gotten the job done in the past, but today he just didn’t have his good stuff out there on the mound.”

CCC’s pitching breakdown on Saturday took away attention from an offense that has been producing runs.

Comet outfielder Kevin Spence hit his first home run this season during the first game of the Falcon series on Thursday.

Despite being without their best hitter Timmion Hughes, who can’t play due to an injury, the Comet offense found alternative means of getting players on base to score.

Nobriga finished with two stolen bases and scored two runs on Saturday as infielders Lumus Russell and Jared Borunda continued to bring in runners in lieu Hughes’ absence atop the batting order.

Borunda’s defense has been solid with great defensive plays, and outfielder Leander Carter, now leading off instead of Hughes, finished 2-5 with two runs scored, an RBI and three stolen bases.

“The (Saturday) game was there for us to win,” Carter said. “I felt everything offensively was going well for us this series, but the win just didn’t happen. It’s a tough loss (Saturday) because Ressler pitched his ass off.”

Carter said he won’t be “taking days off” down the stretch and will do everything he can at the top of the batting order until Hughes comes back from his wrist injury in about two weeks.

“Hughes is a big part of this team because he gives us that spark,” he said. “That’s our left fielder right there and we fuel off of him. Me and him get things going so everyone else can just do their job.”

The team won its first series of the season against Laney College on March 7, but since then CCC has lost four straight in the BVC.

Both teams are above .500 in the win-loss column, but Solano is tied for first place in the conference with the College of Marin.

Comet coach Marvin Webb declined to comment on the team’s performance after the game.