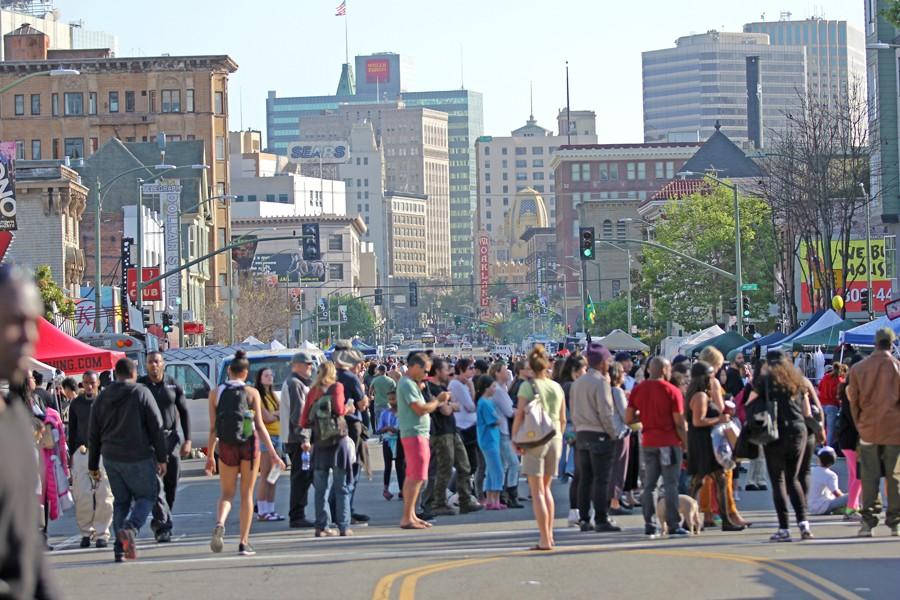 Hundreds of people fill Telegraph Avenue during the monthly First Friday street fair on Friday. The event draws hundreds of residents and artists from around the Bay Area.

OAKLAND — A sea of smells, smoke, art and people engulf the five blocks between 27th Street and West Grand Avenue on Telegraph Avenue every first Friday of the month from 5-9 p.m.

Known as Oakland First Fridays, the monthly admission-free, all-ages street fair has been a staple in East Bay art culture since 2006.

However, its name and image have blossomed into something far more family-friendly and community-oriented since its inception.

Despite a spotty history of attracting vandalism, violence and intoxication, Oakland First Fridays have truly become a safe, friendly atmosphere wherein there is a little bit of something for everyone.

When I recall attending some of the earliest installments, Art Murmur regularly had slight attendance, significantly fewer galleries in participation, maybe one or two food trucks, overpriced art and open containers galore. It felt much more like an exclusive monthly meeting of the “Oakland grimy hipster and socialite club” — an interesting juxtaposition of trashy and classy.

Save for maybe two private security guards, police presence was once severely low. As Art Murmur persisted and gained notoriety through the years, people from all over the Bay Area would travel out to Uptown on First Fridays simply to take advantage of the scene, which was more or less an unbridled block party spilled out on the street, which then was not closed to auto traffic and a regular hassle for drivers-by.

Diversity swelled and suddenly it seemed one could not attend a First Friday without bumping into a few people he or she knew.

Fights were not rare, so it was no surprise when the First Friday event on Feb. 1, 2013, ended in a fatal shooting that claimed one life and injured multiple bystanders.

When consecutive installments appeared to attract more uniformed bodies than not, the scene deflated. Police presence was way up, and it seemed no matter which direction you turned folks were emptying brown-bagged bottles and tall cans, extinguishing skunky cigarettes and griping about the evening’s spoiled fun.

Nowadays, the only smoke blowing about the blocks comes from several grills cooking up a variety of delicious smelling and tasting domestic and ethnic eats.

First Friday revelers have the opportunity to peruse such a wide range of arts and eats, and to do so safely in an inviting environment.

A few bold souls roam Telegraph with bagged open containers and lit blunts during daylight hours, but for the most part such behavior is held off until sunset or later.

Now ending at 9 p.m. and with enough officers on duty to clear the street, the city has effectively curtailed the intoxication, violence and vandalism that escalate as the night progresses.

Music still floods the air and three stages are regularly set up for live musical performances.

Local artists and vendors sit behind booths displaying the wide array of works, which include anything from clothing and jewelry, to drawings, paintings and sculptures, to tattooing and photo booths. People dance freely in the streets.

It is a sight to behold and worth attending at least once, if not many times.

Though it may take some combing to find exactly what you are looking for, there is truly something for everyone there. Oakland First Fridays get 5 out of 5 stars.