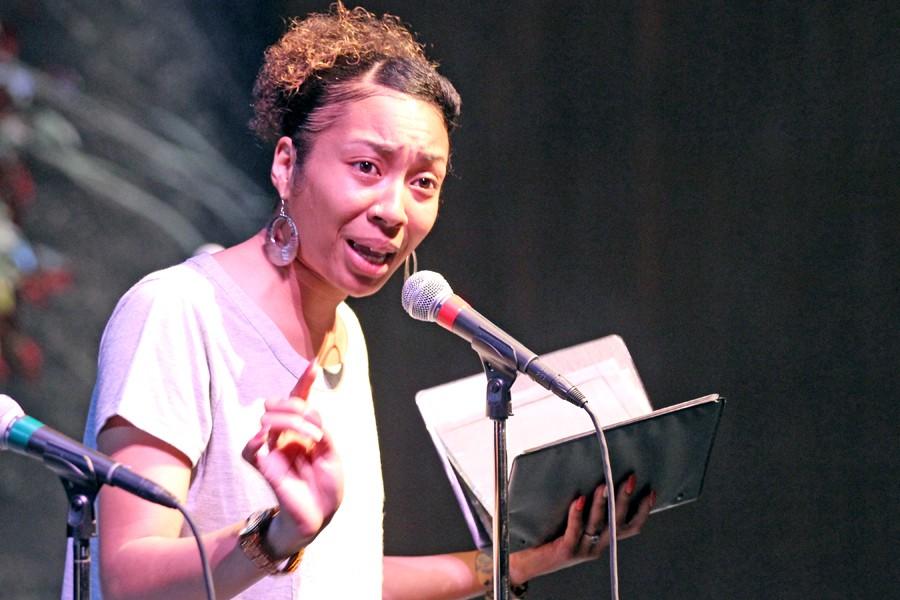 Speech and debate team member DeAlaundira Gardner performs an oral interpretation during the Speaker Showcase in the Knox Center on March 26.

Speech and media students expressed their thoughts, raised awareness on various issues and demonstrated skills built through their classes during the Speaker Showcase held in the Knox Center on March 26 from 7-9 p.m.

The oral interpretations of DeAlaundria Gardner and Lerecia Davis covered social issues very much alive in modern day. Gardner’s piece, entitled “Hope and Despair,” began by creating a picture of what it is like to live in a home that is tarnished with an abusive relationship, drug use and drug selling done by the parents of the household.

She included poems within her piece which described life in the projects and told the story of a man who turned over a new leaf and still met his downfall due to the streets.

Davis’ piece, “Colorism Expressed Through Microaggressions,” explained what it was like “living in the shadow of whiteness” and being victims of severe stereotyping.

She explained the “pigmentacracy” that exists causes those who are not white to be seen as less.

Due to this system, lighter skinned features are considered the pinnacle of beauty. She went deeper into detail on this situation by discussing how young black children are often told to stay out of the sun to avoid becoming darker.

This system also categorizes blacks as thieves or violent people.

An oral interpretation of literature, which fit in with women’s month, was done by Bridgett Lott and was titled “To All My Women: You Are Appreciated.”

It discussed the inequality women face in comparison to their male counterparts. Throughout her piece she included passages by powerful women and their contributions to society, such as Harriett Tubman, Susan B. Anthony and Frida Kahlo.

She wrapped up her speech with lyrics to Tupac’s song “Keep Ya Head Up,” which emphasized the importance of women and that men have no right to mistreat or see them as inferior.

Students in Ellen Seidler’s Digital Media Production class and Anthony Gordon’s Photoshop class also presented their work in the showcase. Different works of photography were included in a brief slideshow. This was followed by a powerful video showing issues with youth, including child neglect, bullying and jealousy,.

The second video demonstrated the importance of not texting while walking and living one’s life outside of a cell phone screen. The final video was meant to show the importance of neutering one’s pets to avoid enlarging the already astounding number of strays.

“The greater good is the message and the message to people is why we keep doing it,” student Debbie Mendel said.

Along with talking about topics for which they are passionate, students also showed the audience what they had learned in these classes and put those skills to work.

Middle College High School students, from John “JR” Morocco’s Drama 106 class, told the audience all that they had learned about the technology involved with drama productions. They introduced the audience to “theater language,” the use of microphones and the lighting system.

The audience was also able to witness an impromptu speech put on by Diamonique Spain. Members of the audience provided her with three topics from which to choose from to create her speech.

After a couple of minutes Spain was brought forward to present the speech on the topic she had chosen: the importance of debate. She explained that not speaking up for one’s beliefs was also not speaking up for those who shared the same view, but did not have the courage to express it.

“If we want our voices to be heard there has to be a debate,” Spain said.The showcase ended with a parliamentary debate demonstration between four students. Willene Turner and Brianda Rodriguez faced April Rodriguez and Diamonique Spain in three rounds of persuasive argument concerning the movement toward making two years of community college free to students, in which the side opposing the movement won the debate.

The audience was especially exhilarated during certain speeches and enjoyed the topics covered. Despite the fact that many people disagreed with free college, it is the presentation that counts, Alejandra Canelo said.

“The show was great and I loved that the audience was supportive, because when you’re up there silence is the biggest fear,” Mendel said.

Seeing the performances and work of the students was a marvelous experience, audience member Sakeema Payne said.

Speech department Chairperson Sherry Diestler said the students’ hard work and dedication showed through in their performances. Students with different experience levels participated, including some that had not debated formally.