Raising awareness, funds ‘one game at a time’ 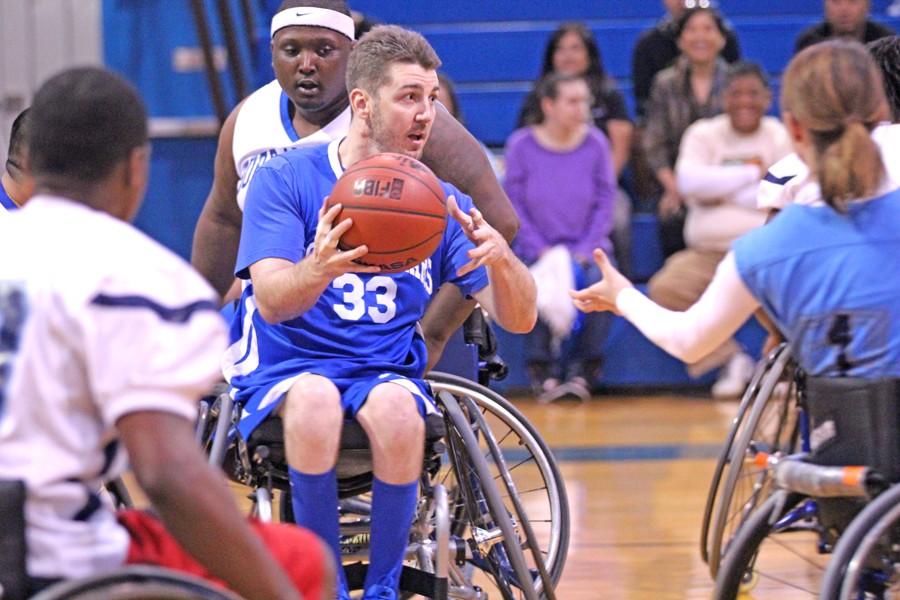 Bay Area Outreach and Recreation Program All Star team member and Vallejo resident Troy Plunkett looks to pass the ball during the wheelchair basketball match in the Gymnasium on March 19.

Awareness and funds were raised for people with disabilities through a wheelchair basketball match on March 19 in the Gymnasium.

Volunteers were strapped into sport specific wheelchairs to play with athletes who use them regularly.

The Disabled Student Services Program (DSPS) and the Bay Area Outreach and Recreation Program (BORP) collaborated for the second year to host the exhibition.

BORP adult sports coordinator Jonathan Newman said, “This basketball game is to get people to look past appearances and realize that (people with disabilities) are people first, who have hopes and dreams.

“We all have things we can and can’t do, but that is only determined by the opportunities open to us. And we can potentially create more opportunities by changing the way most people think.”

And for many of the CCC volunteers, the experience would change their perception of people with disabilities.

Volunteer and Comet football player Anwar Webster said, “It takes a special gift to be able to go out and compete in a wheelchair. But I won’t take anyone lightly who has not had it lightly.”

Twenty-one-year-old Munya Mahiya, a political science major at UC Berkeley, is a member of the BORP All Stars, a wheelchair basketball team that competes in various tournaments nationwide.

Mahiya said he moved to the United States nine months ago from Zimbabwe, where he had to make the decision to amputate his left leg or die from cancer.

“When you have a disability, or are facing death for the first time, it forces you to mature beyond your age,” he said. “You have to sacrifice.

You are bound to have people discriminate against you based on your appearance, but you will also have people who support you.”

BORP All Star Beth Jones, a Cal State-Sacramento graduate, has been traveling with the organization and with the support of her father, Randy Jones, to compete in wheelchair basketball tournaments since she was 13 years old.

Jones said events like these are vital to altering the global perception that people with disabilities live a limited life.

“The more time you have people sit in a wheelchair and try to do what you would normally do in everyday life raises awareness,” Jones said. “And we are passing awareness around one game at a time.”

Mahiya said he recently had a prosthetic leg made but said that if he is not sitting down in a wheelchair it is impossible for him to shoot a basket. This is true even when he is just shooting hoops with his friends.

Newman said this also applies to people not used to playing in the $2,500 custom-built wheelchairs.

He said last year, they had CCC volunteers on one team play against the BORP All Stars and it was a “blowout” for the home team.

“We’ve done it both ways and it’s more fun if you mix up the teams because it increases the chances for success,” Newman said.

“But it is funny watching people normally not in wheelchairs struggle to get the ball up the court. It is a better experience when people are working together.”

Volunteers and BORP All Stars were divided up between the white team and blue team.

The game was sent into overtime with a tie score of 30-30. The white team ultimately eked out a victory by the score of 37-35.