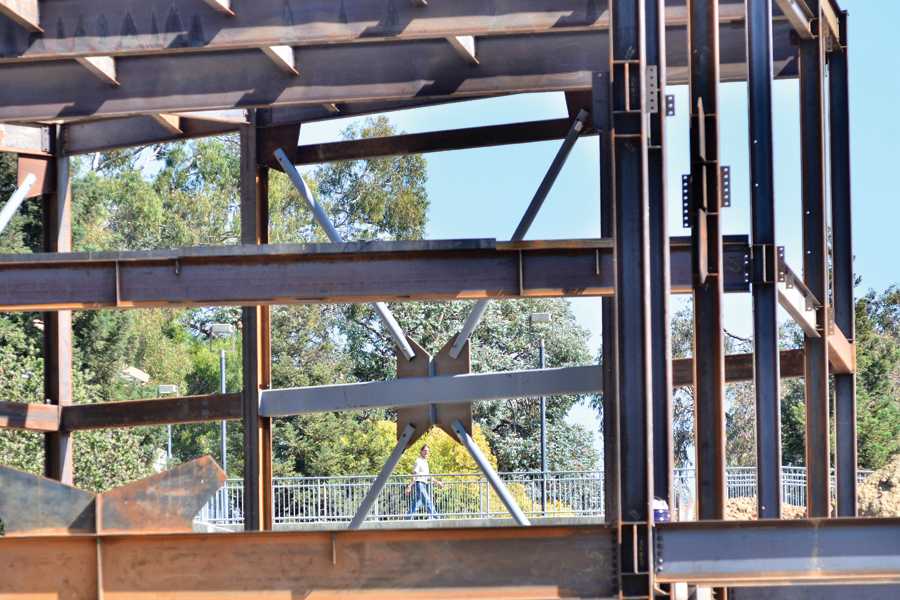 Technology systems assistant Mark Williams walks across the elevated foot bridge from the Physical Sciences Building to the Liberal Arts Building on Sept. 4. Williams walks past recently erected girders for the new three-story classroom building, which is scheduled to open for the fall 2016 semester.

Spitting in the face of government tradition, the construction of the new Campus Center progresses smoothly.

Contra Costa College Building and Grounds Manager Bruce King said they are “on schedule and plowing ahead,” in spite of an early delay when the main architect’s original design put a very small area (of the building) in a designated No-Build (earthquake) area, which (legally) necessitated a redesign.

The campus has seen substantial disruption since the beginning of the project — mainly forcing pedestrians to walk around it as it is located in the middle of campus. But the new buildings are visibly taking form and those in the know give some credit to the ongoing drought.

The Contra Costa College District Facilities and Planning Manager Ray Pyle said, “I love the rain, but it’s a personal conflict. It gets the ground wet, and (makes delays).”

The project is scheduled to be completed by the fall of 2016.

King said, “In 3-6 months you’ll start to see what looks like a real building. We’ve been real fortunate; the drought has helped, believe it or not — we haven’t had anything but normal construction issues.”

Johnson said that hitting the occasional gas line, and temporarily losing water flow to the fire hydrants are the sort of  “issues you always have to deal with on a project this size. Problems (arise), but they get addressed.”

Pyle said, “We always find stuff under the ground that we didn’t know was there.”

Johnson said the project has also benefited from a good working relationship with the contractor (Lathrop Construction Associates inc.) The last major concrete pour was completed last week and that the work has moved to doing M.A.P. (Mechanical, Electric, Plumbing) work, which according to King is what those hanging metal strips in the building’s skeleton are intended to hold in place.

“It’s good that the construction is going well, because around $60-70 million have been invested in the Campus Center Project,” Pyle said, “It’s the biggest single project in the district’s history. I think we’re getting much needed support. It’s the oldest campus in the district, with the oldest buildings. (The Campus Center) will bring a really new look and feel to the campus.”

For now the new structures make for a visually interesting eyesore, King said.

“(Construction crews) put mesh on the chain link on request of Interim President (Mojdeh Mehdizadeh) to make it more appealing to visitors, and (feel) less like a war zone.”