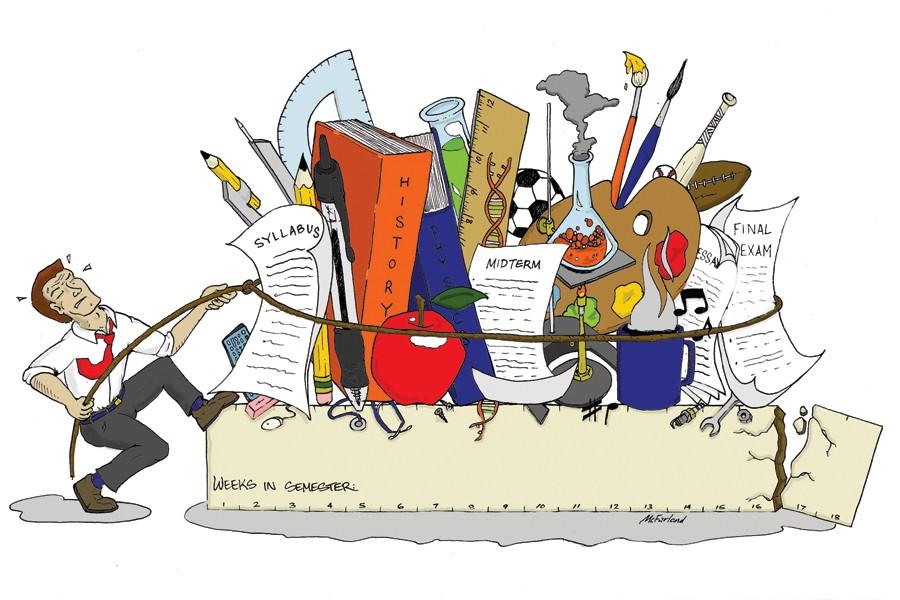 The Academic Senate of Diablo Valley College voted to endorse the districtwide compression of fall and spring semesters from 18 to 16 weeks. By the date of the Faculty Senate Coordinating Council’s May meeting, which has yet to be scheduled, it will be determined whether Contra Costa College and Los Medanos College follow suit.

“The (CCC) Academic Senate’s position is to let this thing run its course,” Academic Senate President Wayne Organ said. “Our senate decided early on to get the vote of the whole faculty. We (approved questions for) a survey at our meeting (Monday) to send out to faculty to get everyone’s opinions.

“We need to figure out what our faculty prefer, but also develop a fallback plan in case our preference isn’t the same as the district consensus.”

A primary concern of CCC’s senate is that one of three colleges in the district will oppose compressing the semester calendar while the other two endorse the change.

Although the decision to compress the calendar is regarded as districtwide, there are no rules against one college continuing to operate on its current 18-week schedule while its sister school or schools convert to a compressed calendar.

District Executive Vice Chancellor of Administrative Services Eugene Huff said, “The state office doesn’t require all colleges in the same district to have the same calendar. Administratively speaking, it would be difficult to have the colleges operate on different calendars. It’s not that it’s impossible, it’s just not practical.”

Based on that impracticality it is largely regarded as a non-option at this point, though still open for discussion, Organ said.

“It will take a year to get approval,” he said. “If approved, the district would apply before fall 2015 with an anticipated implementation of fall 2016.”

The impact on campus

The intended benefits of switching from 18-week to 16-week semesters include more time off for personal and curriculum development, improved student success and retention rates, and the addition of a winter intersession and extension of the already offered summer session, thus allowing students to finish units, graduate or transfer faster.

“There would be a competitive advantage for the district,” Huff said. “None of the contiguous colleges offer a compressed calendar, so if CCC and a nearby school offer the same course, a student could complete the course at CCC in less time.”

Faculty at CCC have been debating compressing the calendar since January, and though student input is not taken directly into consideration by the FSCC, students have been chiming in as well.

The Advocate conducted an anonymous survey to gauge CCC students’ opinions regarding the possible switch to a compressed calendar, the results of which were published in the March 4 edition. The census showed that of the 200 students sampled, 58.5 percent want semester length to remain the same at 18 weeks. In contrast, only 27 percent favored the reduction to 16 weeks, 12 percent did not claim a strong stance for or against and 2.5 percent favored longer semesters.

Once the local senate tallies the results of the faculty survey developed Monday, a definitive answer will surface as to what percentage of faculty actually endorse the switch.

Thus far, professors seem evenly divided on the issue. One trend is that professors within lab-based disciplines, such as the sciences and nursing departments, tend to disapprove while professors in liberal arts disciplines approve.

“The amount of work physics and engineering students need to learn is already challenging to get through in an 18-week semester,” physics and astronomy department Chairperson Jon Celesia said. “My experience with a 16-week system (teaching at SF State) is that you either leave out material or leave out students — or both.”

One consequence of shortening semesters would be longer class sessions, as students are still required to meet state mandated instruction hour minimums for course credit.

A more favorable consequence among students is the possibility of lengthened summer sessions and the addition of a winter intersession.

An anonymous molecular biology major wrote on his or her survey, “It should happen because it would prepare us for the UC system that runs on a quarter system. It would challenge us to have better time management and a better work ethic. It would also let students graduate way earlier if winter classes were to happen.”

Computer science major Shanndra Jones said, “I like how it is now because there is a lot of information to process. I wouldn’t want (the college to compress the calendar) because I like to go into detail with my classes and I think I am better off over a longer period of time.”

Others such as languages major Colleen Garland, a student who has taken classes at both DVC and CCC, think making the change is worthwhile.

“It’s a cool idea; specifically if modeled after the university systems that offer winter intersessions,” Garland said. “It is potentially a very useful and interesting way to get extra units.”

Ampim said, “People are dragging by the end of the semester — students and faculty. The quality of teaching declines when faculty are tired.”

For professors who do not teach during intersessions, Ampim said the extended summer and winter breaks would provide a good chunk of time for professors to “review, reflect on and refresh” their lesson plans.

A public meeting was held March 16 in LA-100, which brought math professor and former Academic Senate president from Gavilan College in Gilroy, California, Ken Wagman, in to address the concerns of faculty. Facing issues of severe enrollment decline in the mid-2000s, Gavilan made the switch to a compressed calendar.

Gavilan serves a little more than 5,000 full-time equivalent students and operates in the South San Jose area, which serves a similar demographic to CCC in terms of basic skills and first generation college students, and is a predominantly Hispanic-serving institution.

“We found there were some challenges,” Wagman said. “There are some classes where it worked fine and teachers had no problem with it, but there were also classes where, you know, maybe biology, instead of doing four labs throughout the semester, they only do three.”

He spoke of the adjustments made by faculty to compress their course loads into 16-week windows and said that of all departments, the natural sciences were negatively impacted the most.

However, it is the current state of Gavilan a decade after the switch that warrants consideration.

But are instruction hours and success rates adequate metrics for gauging what students actually learn in any given classroom?

An assistant professor of biology Deborah Dixon said, “Not all class time is equal.”

Dixon has taught at two community college districts in Texas, where community colleges operate on 16-week systems statewide, and has also taught microbiology in a condensed five-week session. Regarding that short-run microbiology class, Dixon described it as an “intense experience” that was “sink or swim” and resulted in inflated class drop and failure rates.

“I believe students are better served by having a longer semester,” she said.

Her additional concerns include national holidays conflicting with scheduled lab days Mondays and Fridays and the loss of at least two lab experiments with the two-week reduction.

Despite the nebulous results of compressing the calendar and limited published research, Organ said, “I can’t find any data that supports that 18 weeks is any better for students than 16 weeks.”

What data is available can be found online at the United Faculty website, uf4cd.org, under latest news and the link titled compressed calendar data and discussion. It suggests compressing semester length may produce a slight increase in completion and retention rates.

If the district decides to switch to a 16-week semester system, a tentative yearlong schedule is published on the UF website for consideration.