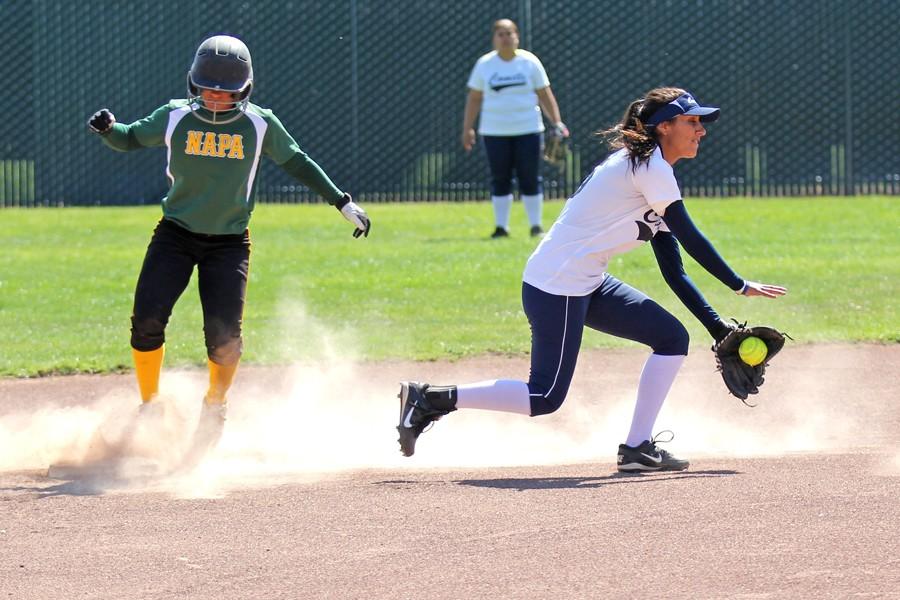 Comets’ shortstop Angelica Espinol (right) fails to make an out during CCC’s loss to Napa Valley College at the Softball Field on Thursday. The Comets ended their season with a doubleheader loss to the Storm, 20-0 and 15-0.

The Napa Valley College Storm let out a deluge of runs onto the scorecard with a 20-0 and 15-0 doubleheader sweep of the softball team Wednesday at the Softball Field.

In the final game of the season the Comets (0-30 overall and 0-20 in the Bay Valley Conference) faced a monumental task if they were to end the season on a positive note.

The squad played host to second place NVC (25-13 overall and 13-5 in the BVC) who were poised to rebound into playoff form after winning only two of its last five games.

“Our goal is to always compete and get better each day,” NVC coach Michelle Hobbs said. “We repeat it in practice, before games, that’s what we use as our motto to prepare for competing at a high level in the playoffs.”

Both contests would be defined by pitching.

The Comet bullpen is locked down by army of one, ace, reliever and closer Cicily Ragsdale. The freshman has thrown complete games in most of the doubleheaders this season for the team.

When not starting she was quickly summoned for relief.

In contrast, the Storm started the first game with Jena Pescio (13-6) on the mound. The pitcher helped her own cause, hitting two for three with four RBI’s and a grand slam.

“I knew it was going out right when she hit it; I put my head down and waited for the bases to clear,” Comet pitcher Cicily Ragsdale said. “It’s the shittiest  feeling in the world. All you can do is start over and get ready to make the play at one. It makes you never want to throw that pitch again.”

The Storm brought the thunder early and jumped out to a 6- run lead in the first inning. They followed the first frame with two five-run innings that could have driven the Comets into a shell.

The squad responded and held the visitors to four runs for the rest of the game. Including another Napa home run. This time it was NVC batting average leader Olivia Henderson (.529).

“It’s about heart and attitude,” Comet left fielder Catherine Nieva said. “We didn’t get down or argue. When we play together things work out for us.”

When the bleeding stopped CCC found itself on the losing end of the first game 20-0.

CCC shortstop Angelica Espinal anchored the infield defense, covering her area and turning an unassisted double play in the first game. Although the squad only gave up two runs in each of the first two innings of the second game, it was fielding that led to the team’s problems.

Ragsdale initiated routine ground balls that were either not fielded or not fielded quickly enough to get off a throw that could beat the runner to a base.

As in the first game, pitching would be the difference in the second.

Not only did Storm game one starter Precio support her effort by smashing a grand slam, game two starter Jordan Samson would also homer en route to a two for three with three RBIs hitting performance that would fortify NVC’s game two chances.

Comet coach Karolyn Gubbine said, “We have to pick through the entirety of the season and pick out the little things we do well and build on them — that’s how we are going to get better.”

While being dealt a 15-0 loss in the second game, the team did show growth and there were plays that were made that would not have been made earlier in the year.

The problem lies in the number of plays that are made in relation to the ones that should be.

First-year player Stacy Fernandez caught the final fly ball of game one and is one of the new players that has shown measurable growth this year.

Earlier in the season that fly ball would not have ended the inning and probably would have extended the deficit.

“In the beginning we were all separated, but as we progressed through the season we got to know each other and we started to get better,” she said.

The team finished the season winless, dropping the final two opportunities of the year.