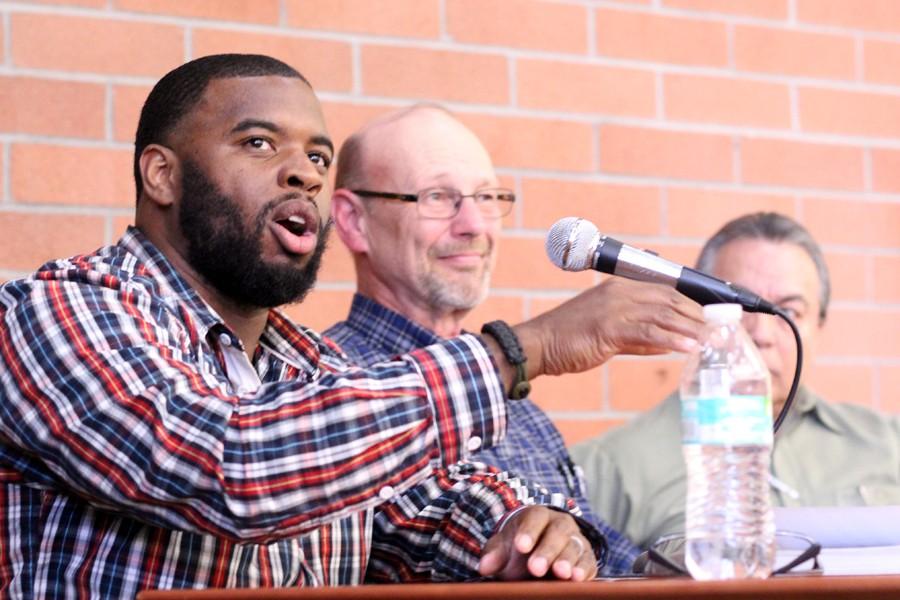 Army Sgt. William Jackson (left), a communications major, speaks to students and faculty during the “Memory Traffic and the Trouble with War Stories” forum held in the Library and Learning Resource Center on April 15. Jackson served in the Afghanistan War and shared his experience as part of “The Things They Carried” scholar events occurring throughout this month.

The Big Read has come to Contra Costa College and kicked off with a dramatic reading at the Knox Center for the Performing Arts.

The Big Read is a program of the National Endowment for the Arts intended to draw the community together in the reading of a single book, and this time the book in question is “The Things They Carried” by Tim O’Brien.

The book is a structured compilation of anecdotes from the Vietnam War. English department Chairperson Jeffrey Michels said, “It’s a love story, and a book about stories. One of the things they carried was stories.”

Director of the performance by the Word for Word Performing Arts Company Paul Finocchiaro said, “It’s about horror. It’s about the worst thing that can happen.”

Contra Costa County Board of Supervisors member John Gioia said that å the 40th anniversary of the end of the war approaching, it was timåe to “tell the story of the Vietnam War (and) how it affects our society.”

There will be more than eight events at CCC, and 20 in total, all of which are free to attend.

The first event was a performance by the Word for Word Performing Arts Company on April 10 in the Knox Center from 7-9:30 p.m.

Word for Word tries to live up to its name, presenting the author’s work as it was written, with as few changes as possible.

This includes reading the character’s lines in third person.

In the words of the actors, “It’s a little bit jarring (to perform), but you forget yourself.”

Director Finocchiaro selected two chapters from the book to present: “In the Field” and “Sweetheart of the Song Trabong.”

It was an unusual performance, with the third person dialogue, actors trading off narration and sometimes sharing lines.