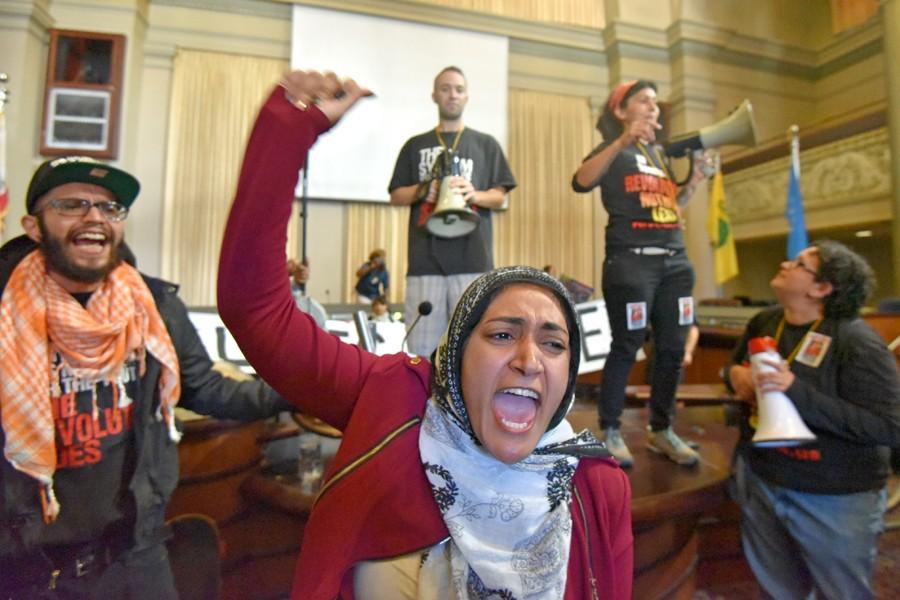 Alameda resident Sarah K. chants with protesters inside the Oakland City Council Chambers during the first stop of the Shut Down Day rally in Oakland on April 14. The protest was organized to raise awareness about the increase of police officers using lethal force.

OAKLAND — A mass of protesters marched Southbound from Oscar Grant Corner on 14th Street and Broadway here on April 14 with the intent to send a clear message that police brutality is running rampant in cities nationwide.

Consisting of mostly young college and local high school students, the protesters flooded Broadway and made their frustrations heard at City Hall, Oakland Charter High School, Laney College’s Student Center and the I-880 on-ramp near Broadway.

Along the way, a procession of police squad cars followed the protesters who were chanting, “Back up, back up/ We want our freedom, freedom/ All these racists pigs / We don’t need them, need them,” as they held up banners that read, “Black Lives Matter.”

Oakland Police Department arrested one of the hundred or so protesters when they rushed past a homeless encampment and up the dirt embankment onto the freeway at the end of Alice Street, near 7th Street, at 3:30 p.m.

The protesters were unable to halt the flow of freeway traffic and were limited to holding up signs and chanting on the side of I-880 due to a combined effort of the Oakland PD and California Highway Patrol.

Before the 1 p.m. march, protesters supporting National Shut Down Day stood under clear sky across from City Hall and listened to members of the Stop Mass Incarceration Network and the Revolutionary Communist Party discuss their grievances with excessive use of force by police agencies in the United States.

Revolutionary Communist Party member D’ Andre Teeter said, “I want to give a shout out to students, to street youth and the OGs for letting their presence be known on this special day,” to a group of protesters across from City Hall massing on Oscar Grant Corner.

“Let’s not fight each other, but the system instead,” Teeter said. “And to the people of faith, the intellectuals, the people in the Stop Mass Incarceration Network and artists who are here today, you are the whitecaps of this righteous wave in this struggle for justice against murdering cops.”

Rabbi Michael Lerner also addressed the gathering crowd when he said, “We can’t combat these injustices by simply saying, ‘Fuck the police.’ We have to put out legitimate complaints we have with our society.

“We have to put forward an image of the kind of world that we want.”

Meanwhile, Gary Miller, employee of the Revolution Bookstore in Berkeley, was passing out fliers in front of a large sign strewn over the side of a large delivery truck that read “stop murder by police” above the faces of 40 people who became the victims of lethal force used by police officers.

“In the month of March alone, 111 people have been killed by police,” Miller said.

“Compare that with the United Kingdom, which since the early 1900s, has only killed 69 people.”

Teeter said, “And anyone who says that police murdering people is not running rampant in this country has not checked out this stat.”

He said he and others who work at the Revolution Bookstore are responsible for spreading the small fliers throughout Contra Costa College in hopes of attracting more students to join in National Shut Down Day.

CCC history professor Manu Ampim said if that statistic is true, the reason police officers in the U.S. have killed more people in one month than the U.K. has in over a century is because the difference in weaponry they are allowed to carry, and this nation’s oppressive history toward minority groups.

According to a Justifiable Homicide Report by the FBI in 2013, there were 461 cases where lethal force was used, and only in three of those a firearm was not used.

And spanning from 2009 to 2013, there were 2,084 reported cases where a police officer killed a felon; only in five cases a firearm was not used.

This report does not take into account the lives of non-felons or cases that go unreported.

“There are less (police homicides) in the U.K. because their police do not carry guns,” Ampim said. “And there is a larger percentage of people of color here than in England. In the U.S. we have a large percentage of groups that have never really been part of the mainstream.

“And there are more cases of police brutality in this country because of our history with slavery,” he said. “Millions have been enslaved and their descendants are now viewed as second-rate citizens.”

La Raza professor Agustin Palacios agrees that this country founded its society with the intent to marginalize certain groups of people and the remnants of this ideology linger today.

“Poor people and people of color generally reflect (wealth inequality) in this society, which is if you are not wealthy you do not have much of a say in government, compared to people who do have money,” Dr. Palacios said.  “People with money don’t have to protest. They just donate, lobby or pass laws.”

Ampim said that while he supports the Black Lives Matter movement and their criticism of police officers abusing power, he challenges the youth to examine a larger issue that adds onto the death toll but largely goes unnoticed.

“We need to be consistent if (the black lives matter movement) wants to be credible,” he said. “These illegal shootings by police need to be stopped, but we must first look at the internal crime in our communities.”

While he said he does not condemn the protesters and their right to express their grievances, Ampim believes this frustration is derived from concrete socio-economic problems that perpetuate violence within ethnic communities, which must be acknowledged.

“Black lives matter, but we cannot be selective with our criticisms,” he said. “If we want to take the discussion to the next level, then all lives have to matter in every respect, from community to community and city by city.”

Palacios partially agrees with Ampim, but said while violence within ethnic communities is a legitimate issue, it distracts people in this society that what they are facing at large is institutionalized racism.

“When you put it into the black-on-black, brown-on-brown or brown-on-black context, you are distracting people from the real issue of institutional racism and structural inequalities,” Palacios said. “Violence in a community is a problem, but it is different when it is the police that are doing (the killing).”

He said violence can be defined differently and there is a distinct difference between breaking some windows, writing graffiti and shooting someone down.

“These people protesting police violence have legitimate grievances that are in themselves critiquing the system of policing in the U.S. and should be listened to and addressed,” he said.