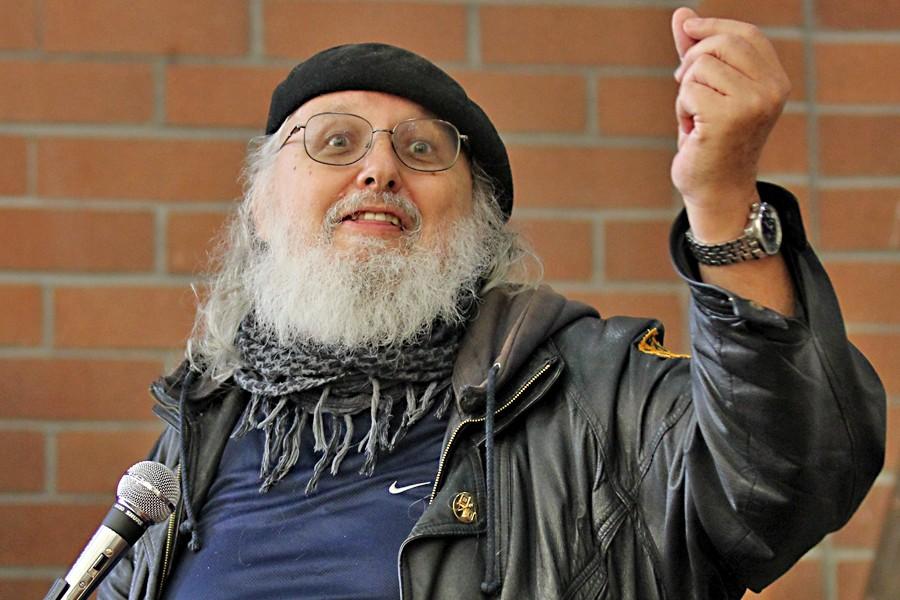 Former fine arts and media professor John Diestler speaks about his experience being drafted into the Vietnam War during the “Memory Traffic and the Trouble with War Stories — A Conversation with Veterans” panel discussion in the Library and Learning Resource Center on April 22.

The second Big Read panel discussion sent guests back to the 1960s and 70s to impart the perspectives of anti-war activists and the social movement of that era in U.S. history.

Nearly 60 students, faculty and community members of all ages and backgrounds came to hear each panelist speak for his or her allotted time, followed by a question and answer segment that concluded the event in the Library from 5:30-7:30 p.m. Wednesday.

“The 50s was a time when people trusted the government. What Congress and the president said then was taken as truth and not questioned,” CCC Library and Big Read coordinator Judith Flum said. “That changed in the 60s.”

From a resister-turned-draftee who feared the war would maim his soul, to a man who spent two years in exile to avoid a war his heart could not back, to a playfully sardonic woman who protested with the renowned and put a pig up for president, each of the panelists provided a unique perspective on those tumultuous years.

Diestler had become seriously involved with anti-war efforts by 1967, his senior year at Richmond High, and had certainly grown from the kid bragging about being tear-gassed at protests to underclassmen the year prior.

“The organization of protests had a lot of heartfelt folks, but it also attracted a lot of people looking to build their resumés, or be a part of the social scene, or whatever,” Diestler said.

“I was convinced we could do something about the war that wasn’t all Hollywood and plastic-y.”

His rampant activism through 1969 — various protests and sit-ins, lying down in front of trains and banging on buses shipping out young men to imminent doom — could not keep Diestler from being drafted in 1970.

“Within a year I was inside the bus, watching some of my friends beat on the windows,” he said.

His difficult decision resulted in a five-year lapse in communication with his father, a World War II veteran.

“While my people were struggling in 1968 for civil rights, equality and economic justice, I could not, in good conscience, take part in the wholesale slaughter of another non-white people who were struggling for their own liberation,” he said.

After spending two years in Canada in opposition to the Vietnam War, McNeil was arrested by the FBI in December 1973, he said.

He faced 10 years in federal prison and a $20,000 fine if convicted of the charges of refusing induction and failing to keep his draft board posted of a current address.

He was acquitted. He said, “Imagine being imprisoned and fined for refusing to kill other human beings!”

Describing her activist efforts with the Yippies, Albert said, “We used satire to expose American hypocrisy.”

The Youth International Party, whose members were called Yippies, was a radical countercultural offshoot of the free speech and anti-war movements of the 1960s.

Albert said of her many experiences and efforts, none are as memorable as when the Yippies ran a pig in the 1968 presidential election, deeming the sloppy hog comparable, if not more qualified, for the role than Republican Richard Nixon or Democrat Hubert Humphrey.

She read flowing, funny segments from her yet to be published memoir that proved the Yippie penchant for satire and tickled many in the audience — from when Yippies brought the New York Stock Exchange to a halt, to when they pretended to levitate the Pentagon.

Albert’s personal movement is ongoing; in 2013, she went to Da Nang, Vietnam, to attend the delegation of the peace and anti-war activists. There, she observed the affect of armed and chemical conflict on those living and born in the shadow of war.

“The decisions made on paper in the U.S. have real results elsewhere,” she said.

Despite disproportionate casualties, all sides are affected. She said, “To look for equivalency in death is meaningless: Every death is a tragedy.”

Diestler said, “Forty years ago, I got drafted. I got a letter saying, ‘You’re drafted.’ Last year I got word I have cancer. It was the same experience.”

McNeil said, “The government asks you to give up your life, your limbs, your sanity. I got to ask, why?

“Today, the military is looked upon as a job-training organization, yet its only purpose is to prepare for and wage war.”

Albert said, “Young people should be asking themselves, ‘How can I make a difference in this world — in my own way?’”

San Pablo resident Irene Thompson, a retired gardener and CCC student at the event, said, “You could never get away with levitating the Pentagon or banging on buses as they left military stations these days; the state has become far more terrifying.

“I don’t know if it’s that young people are cynical or apathetic, but I don’t think they have seen the practical effects of organized protest as my generation has.”