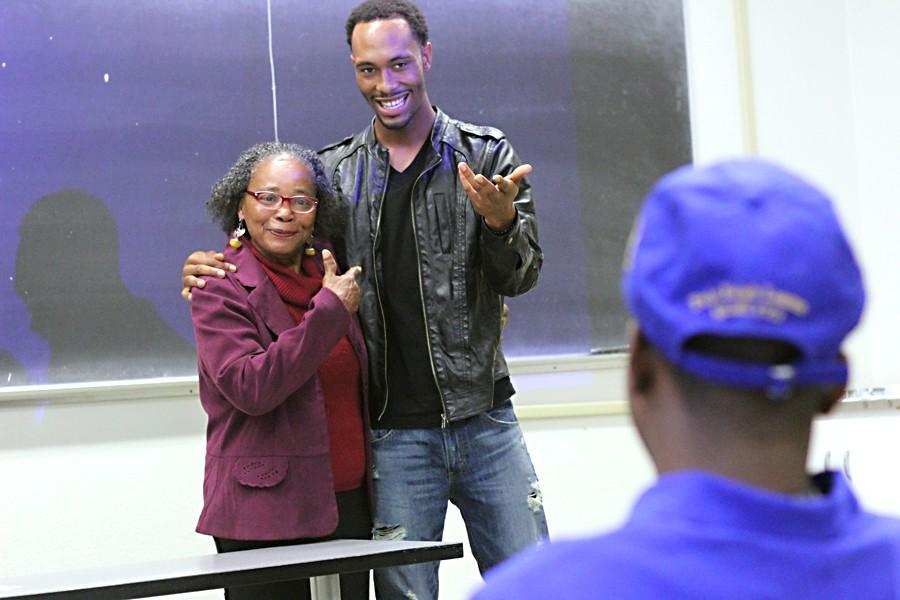 Social science adjunct professor Majeedah Rahman (left) and psychology major Armani Ward introduce the next presenter for a class exercise featuring music during the Contemporary Men class in LA-201 on May 6.

However, the subjects presented in the class, taught by CCC adjunct professor Majeedah Rahman, form a new type of approach in the social sciences department, she said.

“I believe individuals should be able to come into any class and be open to anything in life,” Rahman said. “You should witness the sharing among the men, and women, in my class. It is amazing.”

Cromartie said the conception of the Contemporary Men course began with a philosophical question centered around gender: “How does a boy become a man in society today?”

Cromartie said the same exact question was considered in creating the course at CCC, and the class for professor Rahman and her students.

“The college (CCC) already had a Contemporary Women’s course by the year 2000,” Cromartie said. “This Contemporary Men’s class balances the sociology department out.”

Rahman said currently this semester police issues, dating and positive male role models were just some of the contemporary topics presented and discussed in her class.

However, bigger issues, such as mannerism and politics — including the topic of whether women should run for president of the United States — were some of the more major and complex discussions presented in her class, Rahman said.

The course will be offered again in the spring 2016 semester.