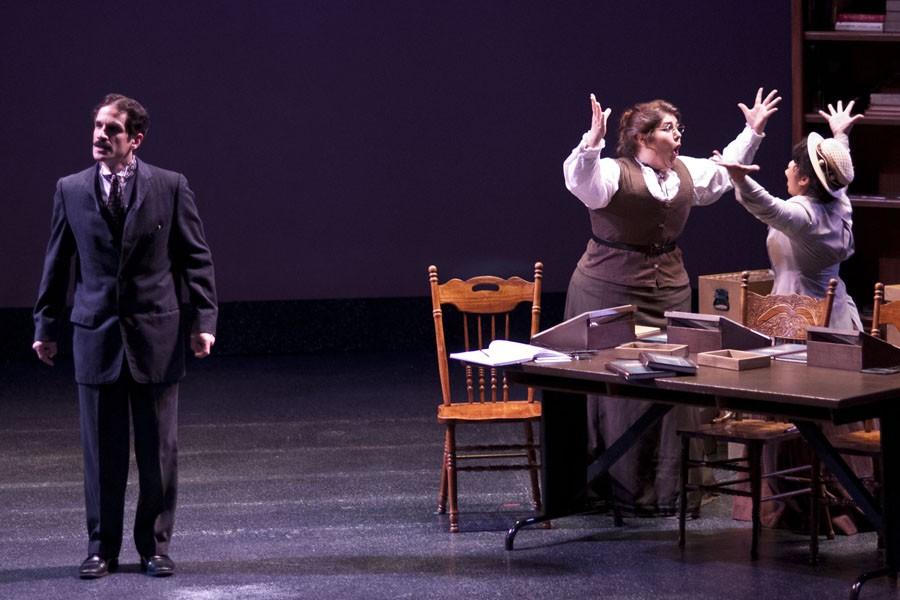 Performers act out a scene during the “Silent Sky” performance in the Knox Center. The play ran from April 30 to May 2.

A spirited group of thespians performed the play “Silent Sky” at Knox Theater from April 30 to May 2.  Silent Sky is the hagiography of a woman, Henrietta Leavitt, whose intellectual work was virtually lost from the annals of science archives.

The fact that she was both deaf and jobless before her experiences at Harvard University do not pose an obstacle. Along the way we are treated to the playwright responsible for writing “Silent Sky,” San Francisco-based author Lauren Gunderson, and her introduction of Henrietta’s sister and female supporters in academia. She handles all of this with an affectionate, yet serious, tone.

The director, Kelly Ground, an adjunct drama professor, genuinely worked to have her actors convey the theme of woman staying true to her purpose and triumphing.

Gunderson’s two protagonists are cleverly drawn to personify what we have come to assume, rightly or wrongly, are characteristics of the stereotypical determined scientist woman and the bumbling professor’s assistant, would-be ardent lover. She is quickly hired as a “computer,” or data-entry clerk by a shy and awkward colleague, Peter Shaw.

Her co-workers by contrast, are a brash, swaggering, funny Scottish academic named Willamena and pre-suffragette, rising on the corporate ladder, Cannon. The play takes great fun in contrasting the direct, in-your-face American style of the brilliant and abrasive Cannon with the polite, rather oblique New England-style of the timid and self-effacing Shaw.

Gunderson also keeps much of the play toward action and does not dwell in pure astronomy talk along the lines of how will she get along with her fellow data-entry operators  and will she go away with Shaw or not. Soon after she realizes Shaw’s romantic interest in her, she suddenly needs to travel back to Wisconsin to care for her ill father. Notwithstanding Leavitt’s feelings, Shaw marries another woman in her absence.

Her sister Margie steals the show on interludes of piano and turn of the century ballads. Her sister also has the best quote of the play,

“…It’s like you asked God a question and he answered. What could give life more meaning?”

By these few amusing lines, Gunderson suggests to us that whereas spoiled modern American women take their freedoms for granted, the more dated New England woman devoutly fought, wished for — and in the end won respect, even better than equal pay.

In contrast to a very repressed and correct, no-nonsense Margie, living through the shedding of American puritanical pressures in the 1920s and 1930s and the absurd jargon which they engendered; yet at the same time she hints rather broadly that career-driven Henrietta (not to mention gender stereotyping) might have benefited her relationship a little of the same.

Using Leavitt’s lighthearted reflections on the subject, Gunderson conveys to the audience her own misgivings on the fusty ways of her fellow sexist Americans and fellow academics.

As the story closes the would-be couples talk in her family home, as we see her health taking a nosedive, but not before she learns the deep impact of her contribution of discovering the Magellan Galaxy within a largely male science academia.