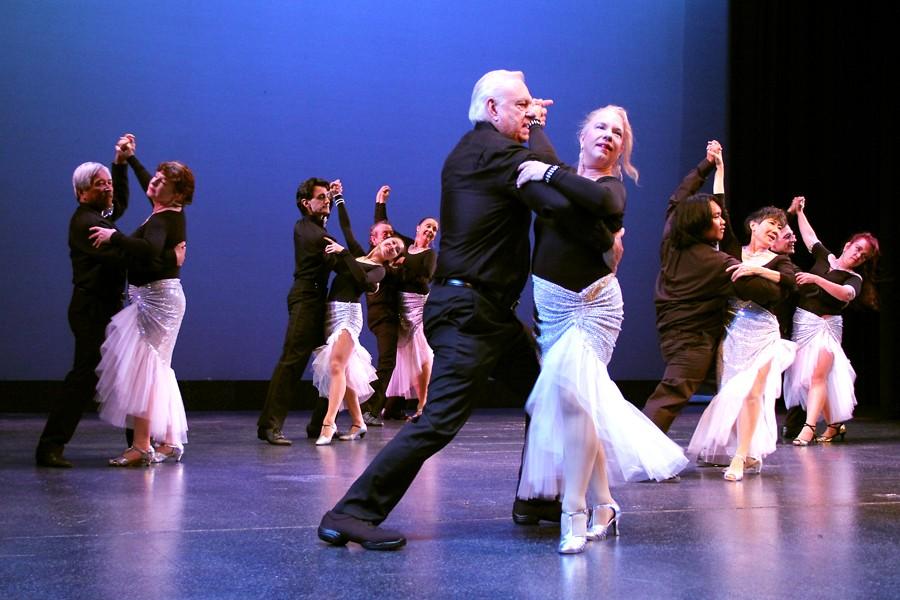 Performers showcase dance moves during the annual Dance Jam in the Knox Center on Saturday.

Fans of hip-hop and belly dance were treated to a wonderful mélange when urban jazz and hip-hop instructor LaTanya Tigner and ballroom dance instructor Natalia Clarke presented examples of their choreography on Friday and Saturday in the Knox Theater from 7:30-9:30 p.m.

The compilation of Tigner’s works titled “Dance Jam,” also featured the premiere of a contemporary work choreographed by Clarke, as well as a belly dance piece choreographed by dance instructor Cera Byer.

Tigner has been teaching modern dance and choreography at the Dimensions Dance Theater since 1995, and is currently a faculty member at Contra Costa College.

This semester Tigner is teaching urban jazz and hip-hop dance classes, and also acting as organizer of the annual event. She is also in the process of creating a new dance project called “The Town,” with Colette Eloi a notable local dance teacher with Dimensions Dance Theater.

She said, “It takes 10 years to be in the mastery of your craft of dance, but what the students achieved tonight was fabulous. That’s due to their amazing dedication and passion. Their hard work showed.”

“Dance Jam” exhibited three of Tigner’s works, each drawing to different degrees on her strong background in both African and modern dance.

The first work was an elegant waltz called “Hasta Que te Conoci,” (Until I Met You) performed by 12 couples and the entire groups of both ballroom and ballet classes with a significant amount of creative choreography by Clarke.

The second piece, a foxtrot titled “Fly Me to the Moon,” was one of the highlights of the show and contained a 1940s charm.

The next piece was a slow waltz set to the song “Unchained Melody” that showed off the amazing grace and control of the six couples who seemed to be enjoying themselves.

The fourth work was also strongly ballroom and consisted of six couples dancing as an ensemble in a “Bachata,” an inspiring piece of Latin ballroom dance that illustrates Clarke’s talent in translating seemingly static forms into ones with energy and purpose.

Rodriguez provided insight into his strategy of repeating the ballroom series of classes by saying, “Natalia has so much to offer. We continue to come back again and again until we learn everything that we can from her.”

The sixth work was a fluid, energetic mix of samba, merengue and hip-hop, with a significant amount of creative floor-work.

Zumba instructor Oscar Solano Jr. choreographed and danced in this piece with 17 other dancers. This piece shows off the amazing strength and flexibility of the dancers.

In the final vignette called “Egyptian Bellydance Ensemble,” the audience couldn’t restrain their delight as the dancer Byer flexed her back, abdomen muscles, circled her hips in figure eights and led her belly dance troupe of seven women in an idyllic Arabian dance scene.

Feathers, black dresses and boas were used as props to emphasize the athletic forms and shapes assumed by the women and men as they prepared for their performances.

Attendant Giovanni James said, “It was so good. I want to dance now.”