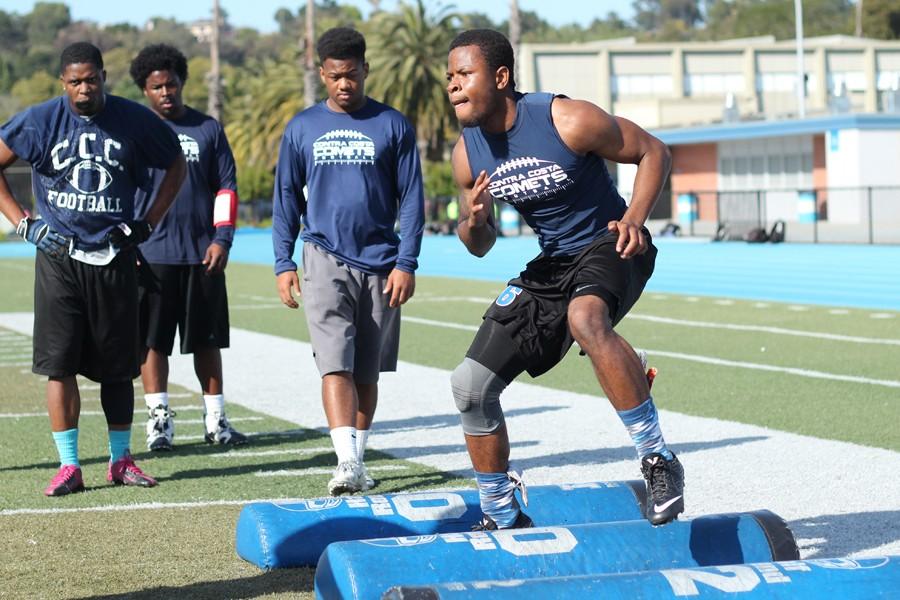 As the spring semester draws to a close, student-athletes at Contra Costa College are beginning summer training for teams that are slated to start up for fall 2015.

The football, volleyball, and men’s and women’s soccer teams coaches are currently recruiting to build solid teams for the upcoming season and will be doing so well into the summer months.

Out of these teams, only the men’s soccer team and football team made their way to the postseason, with the football team playing in a bowl game in 2014.

Football coach Alonzo Carter said he not only plans to reach that level again, but to do so without giving up a loss.

“Next year we want to go 11-0,” Carter said. “We want to cement our name into (CCC) history. We want to create a legacy of being the first undefeated team (since the 60s).”

The men’s soccer coach Nikki Ferguson also plans to bring his team of mostly returning sophomores not only back to the playoffs, but said he thinks his group has the potential to make it to the state championship game.

“Our roster is looking in good shape,” Ferguson said. “Seventy percent or more of our sophomores are coming back and, with that, we can build off last season’s playoff exit (in the first round) and create a winning culture.”

The women’s soccer team is also looking to grow from last season, which only saw one win, by encouraging its players to be more vocal during practice and translate that communication into wins.

Coach Amanda Beckenhauer said she only has three returning sophomores, but has three other freshman players that have committed to joining the team next year.

Beckenhauer said, however, coaching a women’s team is more challenging than men because they are more resistant to learning tactics that they have never heard of before.

“Young women get offended by new strategies or playing styles that they were not taught while playing on their high school or club teams, and take it more as criticism rather than constructive criticism,” she said. “They tend to focus more on the problem instead of the solution.”

Volleyball coach Zachary Shrieve is also in the middle of the recruitment process and said he met with a few students over the weekend, but won’t know if they are committed to joining the team until the summer.

“This is the first time that, at this point in the year, we don’t have a team ready,” Shrieve said. “But it will be fine. I’m confident more players will join over the summer.”

He said he is looking to add needed height to the roster while recruiting, due to the players on past teams being short, resulting in other teams taking advantage.