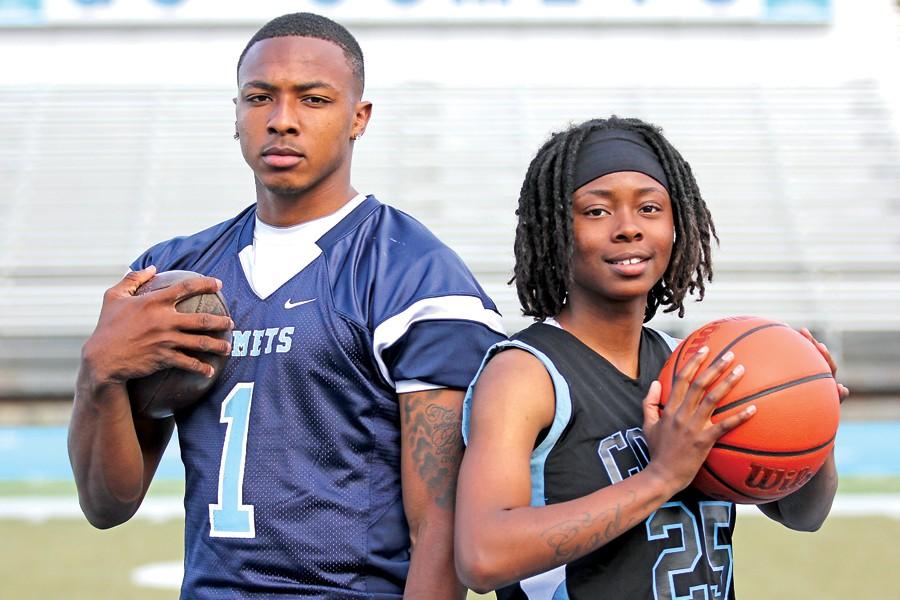 Quarterback Jonathan Banks and guard Ahjahna Coleman earned 2014-15 Athlete of the Year honors for their leadership and outstanding performance on the field and on the court.

Being one of two returning sophomores on any team that is full of freshman forces a person to take on that leadership role, or fade into obscurity.

But for sophomore Ahjahna Coleman, leadership comes as naturally as her ability to shoot with her left hand or squeeze into tight spots during important games.

Coleman’s consistent play has earned her Advocate Female Athlete of the Year honors.

“(Coleman) is an excellent all-around player who does everything well,” women’s basketball coach Paul DeBolt said. “And her crafty left-handed shot is unique for the type of player she is. She won’t be easy to replace.”

Freshman guard Daziah Pounds said the Comets could always rely on Coleman to get points on the board regardless of how well the other team was defending her.

“(Coleman) is really aggressive,” Pounds said. “She can create her own shots from nothing, which not a lot of players can do, and she plays with a lot of emotion.”

Coleman, who stands at 5 feet 6 inches, led the women’s basketball team in points during her final season playing as guard at Contra Costa College, averaging 19 points per game.

“(Coleman) was our number one scorer on the team and was somebody who we could look to when we needed to get points,” DeBolt said. “She is also a good ball handler.”

Pounds said, “While us freshman struggled during the start of the season, we always looked for (Coleman) to score. As the season progressed, it wasn’t on her anymore, but because of her we were able to score a lot more.”

Assistant head coach Ebony Young said that while Coleman is quiet, she leads more through her actions. Because she doesn’t say much, people listen when she does.

“When she did speak it made that much more of an impact,” Young said. “The team felt that and stepped up their game to match hers.”

Because of her abilities on the court, Coleman was named to the BVC All-Conference team and Second Team All-State for the 2014-15 season.

“She was quiet almost all the time,” Oldan said. “It didn’t seem like she believed in herself and was impatient in games and got angry quickly, but she changed.

“(Coleman) matured coming into her sophomore year and has become the player that college scouts look for when they are recruiting.”

Coleman said she graduated from McClymonds High School in West Oakland in 2013. She said that is where she came into her own “tough” style of play.

She said she was raised in West Oakland by her aunt and mother. Her father was in and out of her life, and Coleman saw how difficult it was for her mother to raise her with little to no support.

“I know it was hard on my mom. She sometimes had to struggle to find a place to lay her head down,” she said. “When I play basketball I think of my mom, and she is why I play the game — because I know her struggle, and I saw basketball as my opportunity to get a scholarship so she would not have to pay for my school out of pocket.”

With a 2.9 GPA, Coleman said she wants to study psychiatry and has been contacted by multiple colleges, some offering partial and full-ride scholarships.

And while she said she will play basketball at the school she will transfer to, playing sports is not her priority in her future.

“I would transfer and play if they pay for my schooling,” she said. “But at the end of the day it’s about your education first. I can’t play basketball forever. I need to live — I need a job.”