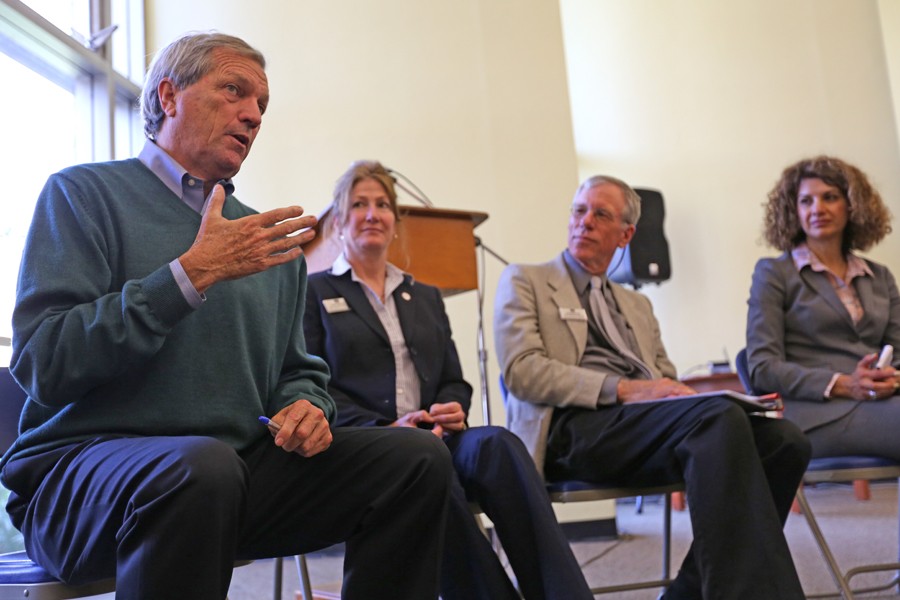 United States Congressman Mark DeSaulnier discusses educational issues and possible reforms to a group of students, faculty and administrators in the Library and Learning Resource Center on May 6.

United States Congressman Mark DeSaulnier (D-Walnut Creek) visited Contra Costa College on Wednesday as part of his Education Listening Tour to open up discussions with students and faculty about their concerns with the state of the educational system.

A group of about 40 students, faculty, college administrators and Contra Costa  Community College District trustees formed a circle of chairs around DeSaulnier inside the Library and Learning Resource Center from 4 to 5 p.m.

“This is our opportunity to speak and be heard,” Interim President Mojdeh Mehdizadeh said to open up the discussion, “and really force our legislators to open up talks about issues that matter to (students) in education.”

DeSaulnier was recently elected as the representative of the 11th District of California. He said to gain a better grasp of the issues that students and faculty are facing he is visiting each of the schools in his district as part of the tour.

Educational reforms were on everyone’s mind, be it students, faculty or administrators and DeSaulnier addressed each of their questions.

Topics ranged from retirement plans to eliminating college tuition to increasing the pay of part-time professors, creating new bills that will tax the extremely wealthy, the status of undocumented students and how to balance raising a family while going to college.

After each person in attendance introduced themselves to DeSaulnier and the audience, Middle College High School teacher Rico Atkins asked him if he is in support of President Obama’s idea to eliminate community college tuition.

“President Obama’s idea is great,” DeSaulnier said. “We have to spend money to make money, and the research shows making community college free will give a higher turnaround investment for our society as a whole.”

He said student debt in this country goes up $3,000 a second and students are left with “astronomical” bills that they have to pay off after graduation.

English professor Jeffrey Michels said, “Don’t be terrified of student loans. Your education is worth more than what you will have to pay back.”

Questions later shifted from student debt to how Student Learning Outcomes (SLOs) have not fostered students toward success but have actually created deficits for students in low-income areas because of an increased workload on undervalued professors.

“SLOs are ineffective, absurd, disgraceful and are just a flash in the pan,” physics and astronomy Chairperson John Celesia said. “What changes students’ lives are good teachers.”

Zaragoza said being a product of the K-12 California educational system and while working for an after school program he has noticed that some students are obviously gifted in academics and excel, while others struggle.

But he also said that some teachers or professors do not tend to those who struggle because there is no incentive due to the low pay and stigma that comes with being a teacher in elementary, middle or high school levels.

“At what point do we hold certain professors accountable for their students to get what they need?” he asked DeSaulnier. “I would love to become a teacher, but with such low pay how could I pay off loans for the schooling needed to become one?

“Reforming the K-12 system is a big deal. Take standardized testing, for example,” he said. “I feel like teachers who do a good job preparing all their students to do well on the STAR tests should be rewarded with extra pay.”

DeSaulnier responded by discussing how schools in Europe and some states in the Northeast have higher test scores than most states or countries because they pay their teachers more.