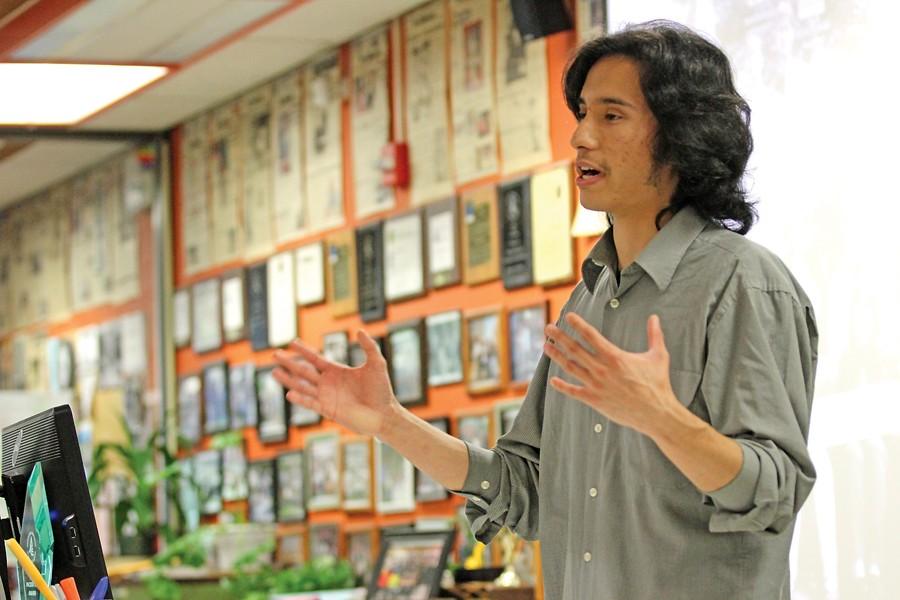 Photo editor Christian Urrutia plans to incorporate multimedia projects into the standard workflow of The Advocate and continue to further promote the newspaper by attaining a larger social media presence.

Throughout the history of The Advocate there has never been an editor-in-chief with as much experience with multimedia projects than the one who has just been recently elected.

“He’s ready,” journalism department Chairperson Paul DeBolt said. “What I like about him is that he has had a hand in almost every online project and written stories.

“I am looking forward to what he will bring to the paper considering he is the first editor-in-chief who has real multimedia skills,” he said.

Christian Urrutia ran unopposed and was elected as editor-in-chief on May 6, by The Advocate staff for the upcoming 2015-16 publication schedule.

Urrutia graduated from Vista High School in Richmond, Calif., in 2009, and started his time on The Advocate as a staff photographer, and then promoted to assistant photo editor.

He became the photo editor in 2014 and has maintained his position ever since.

Since then he has won various multimedia and team project awards at Journalism Association of Community College (JACC) conventions and also been part of three staffs that were awarded the JACC Pacesetter Awards.

Pacesetters are awarded to the top four two-year community college publications in the state.

“I want to promote more multimedia projects,” Urrutia said, “and set a standard that future staffs have to work to achieve.”

As editor-in-chief, he said he wants to move the publication further away from print-only.

He also wants to promote the online platform to a wider audience by creating more editorial positions that will oversee this growing channel.

“First I would like to promote a social media editor to take the reins and make sure (social media) projects are getting done,” Urrutia said.

“If we post on social media on a consistent basis then promoting the publication is not as big of a challenge.”

Suela said that he must become more demanding of his staff if he wants the result to be a quality publication.

“(Urrutia) has some room to grow,” she said. “He is a really nice guy, but I would like to see him put his foot down more in the future.”

DeBolt said that is only one of the challenges most editor-in-chief’s are faced with.

“It’s always a challenge to learn to lead and organize,” he said. “The editor makes all the final decisions, assigns the work, collaborates with section editors and discusses issues with staff members.

“There is always an adjustment to be made and I think he will handle them responsibly.”

One adjustment that he will have to cope with is the loss of Art Director George Morin, and Associate Editor Cody McFarland, but will have about 10 returning staff members.

DeBolt said with his time on The Advocate, Urrutia has proven himself to be a smart, reliable, patient “team player.”