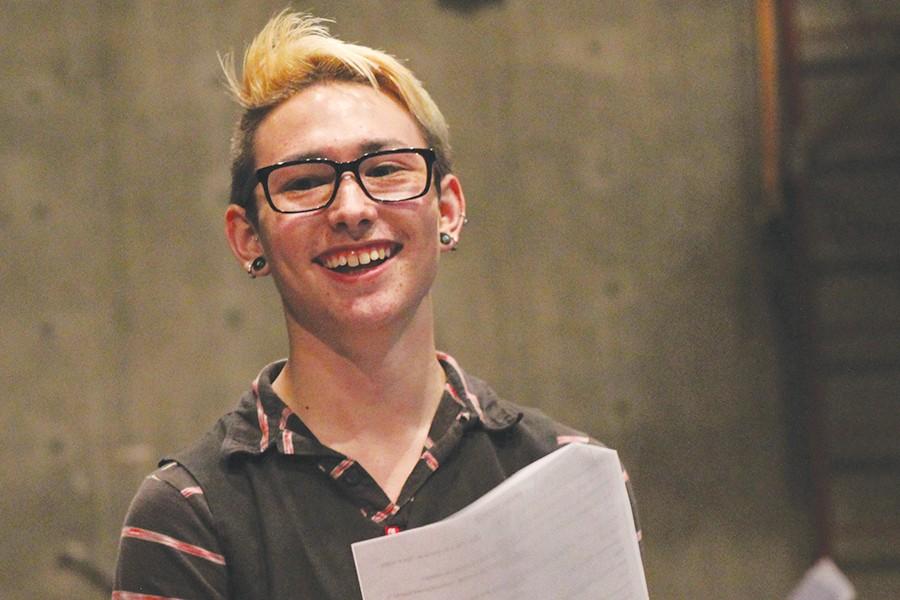 Mathematics major Dillan Wagner rehearses “Wonders of the World” with Richmond resident Siobhan O’Brien in the Knox Center on Aug. 20

The drama department will be featuring a comedy and romance play during the fall semester. Both plays will be held in the Knox Center through the weekends of Oct. 8-17 and the second Nov. 12-21 starting at 7:30 p.m.

Adjunct Drama professor Tara Blau will direct the first play “Wonders of the World”. It’s about a woman wanting to affirm her identity after divorcing her husband. During her journey she meets these unique characters that give her new perspectives on life. The time frame of the play is set in the present moment.

“It starts off with this woman learning a terrible secret about her husband,” Blau said. “So she goes off to find her purpose in life.”

He said “Wonders of the World” was written in 2000 by American playwright David Lindsey-Abaire and was first played at the Broadway Theater in New York. The cast for the play includes seven actors made up of drama department students and a few local actors.

Despite the female lead going through a divorce, the play is supposed to be hilarious. The people she meets along the way are what will make the play funny. Along the way, these strangers help her find the next step to her life and open her mind to new things.

“I think the language and the characters in the play are going to make people laugh” Blau said. “But she meets people on her journey that make and shape her for the next steps in life.”

Both plays will have a small cast due to ongoing seismic renovations to the Knox Center. There also will not be any set pieces or scenery changes during the show either.

“The theater itself is going through renovations, so we can’t use big sets pieces on the stage,” adjunct drama professor Angelina LaBarre said.

Though Blau has a small cast, she still expects the audience to enjoy the play, and be exposed to different perspectives of life while watching it.

She said the audience should learn life lessons from the play and should be able to connect to real life situations that deal with conflicts.

Although the renovations are happening in the Knox Center, they should not take anything away from the play, Blau said.

“We still want the audience to have a warm and fuzzy feeling when the audience experience a play here,” she said, “We want them to think about themselves and how they would deal with this experiences in real life.”

The drama department’s plays have been comedy and some deep drama during the past years. This semester the department is heading toward a different direction with romance. LaBarre said she thinks people need to see love on the stage, other than the redundant comedy and drama plays that’s been going in the Knox Center.

“In the past year we‘ve done some comedy and some serious pieces, so this fall we’re going to go with some lighter pieces to really entertain the audience,” she said.

“We want them to have a good laugh with Wonder of the World, and fall in love again with Almost, Maine.”

LaBarre will direct the second play, “Almost, Maine”. According to “almostmaine.com,” it’s a romantic comedy set in a fictional town in Maine. The play was written in 2002 by John  0, and was showcased at the Daryl Roth Theatre in 2005.