Skyline College chases Comet's quick tempo with a player down 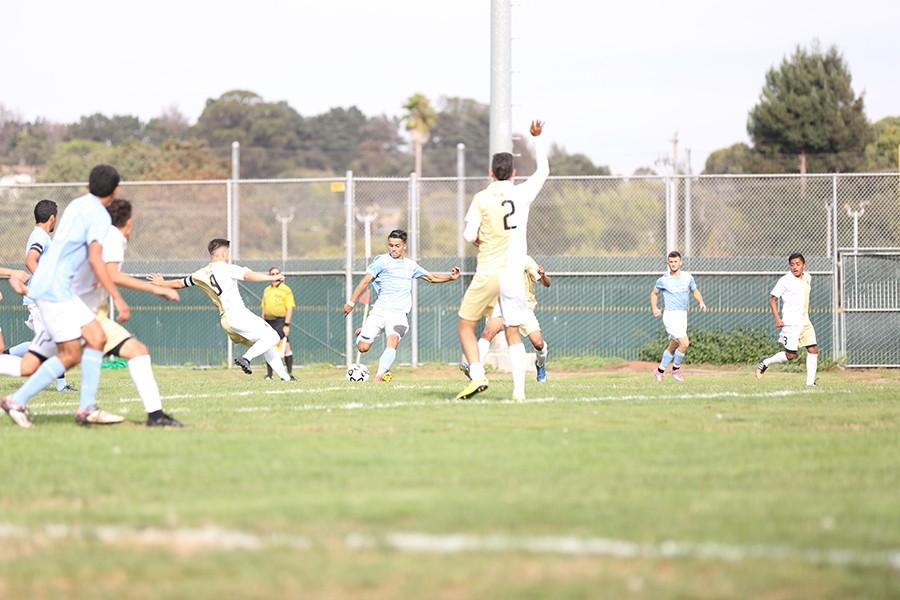 The men’s soccer team maintained its solid defensive shape, and predatory offensive pressure to shut out Skyline College, who went down a player early, and cruised to a 3-0 win on Tuesday at the Soccer Field.

Contra Costa College (3-1-1 overall) outshot the Trojans 3 to 1, and did not cede a single corner kick throughout the game while totaling 8 for itself.

But if you were in the bleachers during the final ten minutes of the match you would not be able to tell that CCC was playing with a man up or that it led by two goals, and not only because the scoreboard doesn’t work.

“Imagine the score is 0-0,” Comet coach Nikki Ferguson repeatedly yelled to his players as they pressured for a goal with possession play inside the Trojan’s defensive half of the field. “You have seven minutes left, let’s go.”

And in the 89th minute, Comet striker Bryan Vega responded to Ferguson’s request by finishing inside the penalty area to make the most of a give-and-go sequence assisted by striker Brian Santos.

Goals in the first half were scored by strikers Hugo (Missel) Hernandez and Pedro Rodriguez who were both able to settle aerial balls curled into the penalty area from near midfield and rifle them past SC goalkeeper James Brignoli and provide a cushion going into the second half.

And sophomore Comet midfielder Jesus Villagrana and Vega tallied the assists for those goals, respectively.

A play in between these two goals, however, saw Skyline College (0-3) sophomore captain Marvin Vargas be sent off after being shown two yellow cards within seconds of one another 29 minutes into play.

Vargas received his first yellow for a wreckless slide tackle from behind on Comet left fullback Benjamin Reiter who stole the ball from Vargas while he was dribbling down the right side of the midfield in transition.

And after he went in with cleats up, above the ankles, he refused to acknowledge center official Dwight Malone who was calling him over. Once Malone turned around, Vargas made a sly comment and began to slow clap.

Defensively, Comet center backs Davis Okonkwo and Reiter gave the Trojans a motive to accumulate their nine fouls. They were not only tormenting the SC strikers by shutting down space in the back, but also creating scoring opportunities by dribbling into space during transition.

But during the second half, Ferguson said being able to slowly bring the play into the Trojan’s half gave other Comet players time to move into space along the wings to stretch and confuse the opponents’ defensive positioning.

And this tactic was effective against a team who struggled to close gaps in the defense because it was playing with only ten players instead of 11.

“Getting a red card early in the game made our guys drop their heads and fall apart,” Trojan coach Danny Link said. “We had too much space to cover playing with a man down, especially since we don’t have depth on our bench. The red really took its toll (on the Trojans).”

Ferguson said Skyline’s players created more attacking options as a team with one man down than they did for most of the first half.

“It’s funny how it works out that way sometimes,” he said. “But we were the better team on both sides from start to finish.”

The Comets will play its next non-conference game at Chabot College at 4 p.m. today.