Payne sees different perspectives, captures student realities behind the lens of her camera 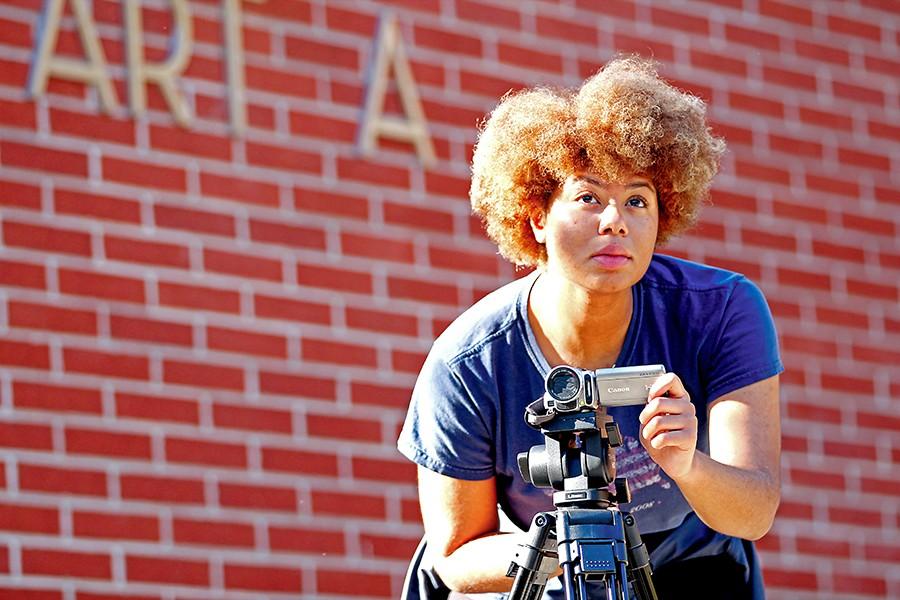 Communications major Sakeema Payne aspires to create films focusing on themes of love and romanticism after shooting videos for the various departments on campus.

Taking time to produce films is a daunting task, especially when faced with 12 units of class, working as a tutor in College Skills Center and serving as a student ambassador in the Welcome/Transfer Center.

For Sakeema Payne, a 19-year-old communications major, however, making time to pursue her lifelong passion of film making despite her other obligations is an easy choice. Students may recognize Payne from around campus by her big hair, and even bigger smile. Payne can even be seen helping out in the concession stands at athletic contests on campus.

“At the age of 5 she told me she was gonna be an artist,” Payne’s mother LaVora Mathis-Payne said.

Payne graduated from De Anza High School. She said when she graduated, people challenged her choice to go to a community college, but it did not deter her from coming to Contra Costa College.

Spring will be her final semester on campus and she plans to attend San Jose State after leaving CCC.

Mathis-Payne said she encouraged her daughter to start somewhere with less pressure in order to zero in on what she actually wanted to study before going to a four-year school.

As a child Payne had trouble writing and would frequently throw tantrums and work herself into a tearful frenzy while frustrated by her studies. It was not until her mother secured the help of a tutor that Payne was able to overcome her emotional hurdles.

Mathis-Payne said she enrolled her daughter in summer art classes, which helped to express herself and to relax.

Now as a student ambassador, Payne works to help students become acquainted and situated at CCC.

Payne said assisting students helps her to find peace of mind. She added that she genuinely enjoys tutoring students in the College Skills Center.

Payne said of her earliest work involved filming the neighborhood dogs and cats with her cousin and afterward they would edit their clips.

Her father, Paul Payne, said ever since she was little, she was always eager to help other people.

Payne said she realizes that a lot of what she does provides aid for those people in need of resources, but it is her focus.

She said creating and editing videos was necessary for her as a creative outlet.

“I love being out there filming,” she said. “I love capturing the energy of happy moments.”

Athletic administrative assistant Shawna Belfield said, “I don’t know how she does it. Nothing seems to slow her down.”

She said Payne takes great pride in everything she does.

Payne said her next video project will be to show a breakup via a film titled “Seasons,” where she will show the different stages of a romantic relationship. She said she has about 30 minutes of planned footage.

The young videographer says the romantic episodes from the film do not directly mirror events from her personal experiences but instead are little pieces of life she thinks a large audience will relate to.

“I was in a relationship, and after the relationship ended it only took a couple of months until the idea for ‘Seasons’ started to develop in my mind.” Payne said. “But I don’t want it to be about me, I don’t want to come across like Taylor Swift.”

But for now, “Seasons” is still on the drawing board, Payne said. She said she is currently working on producing an informational video for the Math Lab here at CCC.

Payne, however, also pointed to a CCC policy which she believes hinders students development.

“They don’t give media students enough time to use the computers in the media lab,” She said, “I’ve already completed the program but when I was a part of it, it was hard to make time to use computers because they can only be used under a professor’s supervision.”

The media lab computers are the only ones on campus available to students that offer the full, updated suite of Adobe creative programs.

Payne has already achieved her Certificate of Achievement in Digital Film here at CCC. She said she wants to major in advertising when she transfers, but plans to continue her filmmaking because it is something she loves to do.

“She was motivated and focused. I’d like to clone her,” Seidler said.

Among the videos Payne produced is a short video titled “Pharrell Williams-HAPPY-We Are Contra Costa College!” that has garnered over 1,000 views.

Payne has a positive outlook on life, and brings her passion for life to everything she does, whether it be creating videos or helping her fellow students.

For the future, Payne plans to create video to go along with a pop-up tutoring event.   Payne said a lot of her work has been geared toward a niche audience, but she is excited to work on projects that she believes a much wider audience will enjoy.