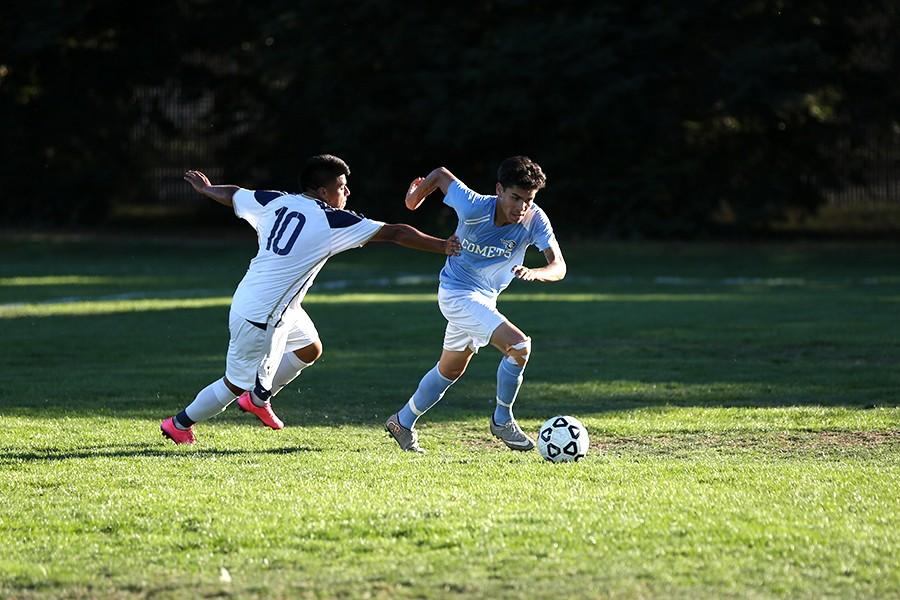 Comet center back Edgar Yepes steals the ball from Eagle midfielder Oscar Martinez during the Comets’ 2-1 win at the Soccer Field on Friday. The Comets host Santa Rosa Junior College today at 4 p.m.

With less than two minutes left to play in the game, the men’s soccer team capitalized off a Mendocino College error to score the winning goal holding last season’s Bay Valley Conference champions to a single goal at the Soccer Field on Friday.

Contra Costa College (6-4-3 overall, 2-1-1 in the BVC) and Mendocino (1-2-1 in conference) seemed as though it would share a point (tie game) and record (1-1-2) by game’s end, but Comet striker Missael Hernandez’s volley from an incredibly tight angle sealed the valuable 2-1 win.

“It’s tough when you give up a goal at the 90th minute because of a mental lapse,” Mendocino coach Shane Huff said. “It was a tight game against a good team, but a draw would have been a fair result.”

The Eagles “mental lapse” allowed CCC to swing the play along half field to the left sideline and move into the edge of the attacking third with the game tied at 1-1 and time running out.

Hernandez sprinted into space near the far goal post to find midfielder Jorge Avina’s 45-degree cross, sent from 25 yards from the goal. Hernandez volleyed the out-swinging ball with the inside of his right foot less than two yards from the end line — lofting it above Eagle goalkeeper Victor Hernandez’s reach and into far corner of the goal to complete his brace (two goals).

Missael Hernandez admitted that he hit the ball with the intention of it being a cross to the far post, but it ended up going into the top left corner of the goal.

“I didn’t think I was going to score,” he said. “I just knew I had to step up or else we would lose the battle for second place (in conference).”

He also scored CCC’s first goal at 32 minutes when he cleaned up a loose ball that was delivered into the penalty area by striker Bryan Vega.

Hernandez now has four goals this season, three behind the team’s leading goal scorer Pedro Rodriguez and one behind Vega.

“(The team) worked hard to pressure high up the field while keeping our (defensive) form, especially during the second half,” Rodriguez said. “But (Hernandez’s) goal was wonderful. He came out of nowhere to score — he was the man of the match.”

Rodriguez was limited to only 19 minutes of play, coming off the bench at minute 36 and being subbed out at minute 75. He is still recovering from a foot injury.

CCC fired only three shots compared to Mendocino’s two in the first half, but both teams finished with six shots by the end of a high-tempo game.

Mendocino’s Huff said after his team struggled throughout the first half, it held possession better and created more goal scoring chances in the second half.

Comet coach Nikki Ferguson said Hernandez’s goal was pivotal, but if it were not for centerback Edgar Yepes’ consistent defensive clearances and vocal leadership, the game could have ended as a loss for CCC.

“(Yepes) was the (defensive) man of the match,” Ferguson said. “He dominated in the air against a team that likes to serve the ball into (the penalty area).”

The Eagles scored their goal at 49 minutes, when a long throw-in to the edge of the penalty area caught the Comet defense napping.

Mendocino striker Oscar Martinez, in between two Comet defenders, trapped the ball and quickly spun, dribbled and rifled a low left-footed shot past Comet goalkeeper Eduardo Escamilla and into the bottom left side of the goal.

The Comet’s last minute goal, however, secured three points in the conference standings to bring them up to seven points and second place. CCC now has 28 goals scored so far this season — six in conference play.

The Comets are now trailing only Yuba College (7-4 overall, 3-0 in the BVC) and by just two points in conference. Unlike CCC, the 49ers have only played three games in conference as of press time Tuesday.

Depending on the result of its Tuesday game at Merritt College, which can be found on cccaasports.org, the Comets could be battling for BVC supremacy on Tuesday against Folsom Lake College on the Soccer Field at 4 p.m.