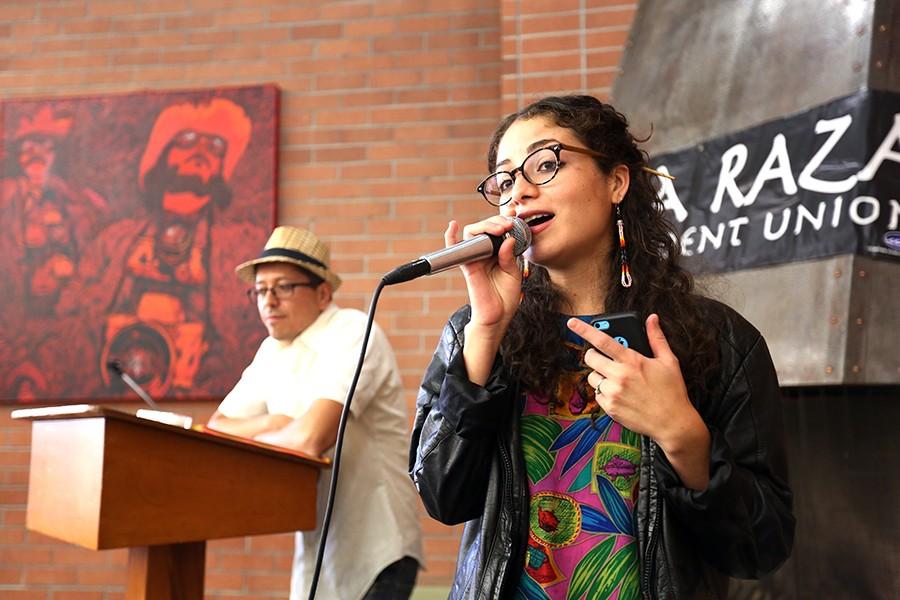 By Roxana Amparo and Lorenzo Morotti

In celebration of Indigenous People’s Day, La Raza Student Union organized an open mic tucked in the corner of the Library and Learning Resource Center on Monday from 4 to 6 p.m. to reject the national celebration of Christopher Columbus.

“(Indigenous People’s Day) is the counter narrative to Columbus Day,” philosophy major Alfonso Ramos  said, “To resist the narrative we have been taught in school (that Columbus discovered America).”

Before the performances, Mojica-Villegas explained that Columbus should not be celebrated because his arrival to the Americas signifies the destruction of hundreds of cultures and centuries of slavery.

Indigenous People’s Day was created in 1992 in protest to U.S. Congress organizing a quincentennial celebration of Columbus’ voyage to the Americas, and the centuries of slavery he instilled.

Since then dozens of cities and colleges across the United States have adopted Indigenous People’s Day in condemnation of Columbus as a murderer and slaver.

Herschel Schwartz, linguistic major, said, “I do not know how often people talk about (indigenous people), so it is good to have (“Celebrating Indigenous Peoples in Diaspora”) event.”

Mojica-Villegas said, “First we were robbed of our land, our language, our culture and then ourselves (identity).”

For over 500 years, people in Latin America have dealt with the negative effects of subjugation and slavery that conquistadors instilled into American societies.

He said the question whether Chicanos in the United States should celebrate Columbus Day or Indigenous People’s Day is still up for debate — even if it is clear that it should not.

LRSU President Maria Lara said Indigenous People’s Day focuses on creating awareness that Columbus was not the person K-12 education made him seem. Lara said that students at schools across the state and nation often lack the opportunity to express themselves. So having this event on campus helps students learn about their cultural history that they would not have otherwise if they took what is taught in history classes at face value.

Undecided major Salvador Andrade said, “Not a lot of people tell the truth or are informed about what Columbus Day signifies.”

After Ramos gave his brief introduction about why Columbus Day should not be celebrated, he played a melody with his flute called “One Wolf” and recited a short poem.

Chavarría’s poem titled “High School,” is about his experience as an immigrant coming from Mexico with his family to California’s Central Valley. He said not knowing how to speak English and the feeling of losing his cultural heritage was daunting, but these were obstacles he had to overcome.

Counselor Alfred Ignacio Zuniga said he has experience discrimination due to his light colored skin.