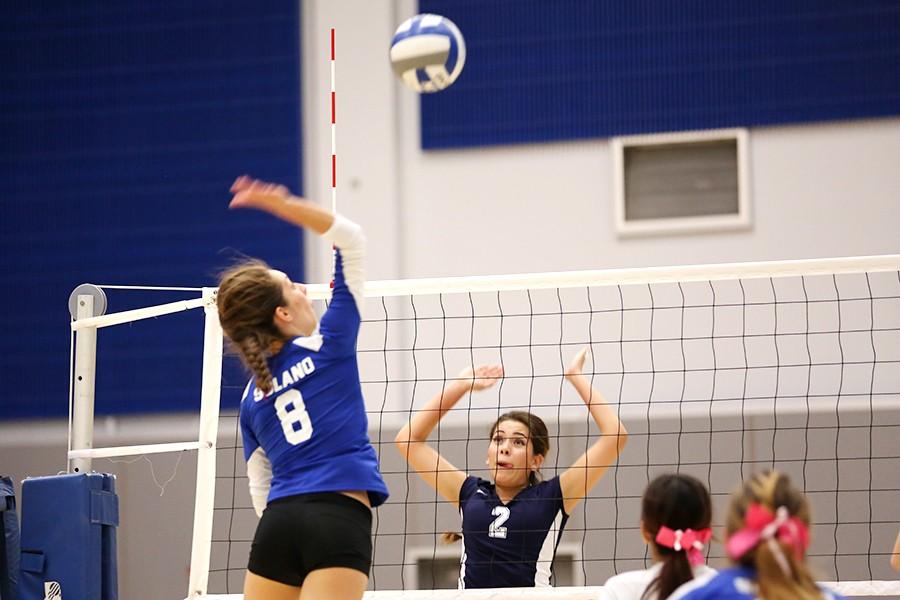 The volleyball team struggled to find a consistent offensive rhythm  losing in straight sets 25-12, 25-21 and 25-6 against the College of Alameda (4-12 overall and 2-6 in the Bay Valley Conference) on Wednesday in the Gymnasium.

CCC held an early lead at 3-2 versus Alameda, but neither offense got into a groove.

The tight score opened when the Cougars created two consecutive four-score runs that brought the score to 11-3. They were able to keep offensive pressure on CCC.

In Fairfield, the Falcons let fly a bombardment of shots that prevented the Comets from mounting any sustained attack.

The team’s next game is on Friday against Mendocino College in the Gymnasium at 6 p.m.

Unnecessary mistakes gave away points in both games and prevented CCC from building any momentum. Alameda was able to capitalize on the error-prone CCC offense to win the first set 25-12.

“The first set is usually rough. We have to figure out how the other team plays and how to react to what they do,” Comet middle blocker Skylar Moore (one kill, three digs) said.

After losing the first set on Wednesday, the Comets showed signs of life. The second set started off rough with the Comets trailing 10-3. Alameda found its offensive rhythm through the play of middle blocker Nadia Bedard (eight kills, eight service aces).

The Comets were able to fight their way back from the early deficit with good communication and ball movement. That same strategy was lost on the squad in the contest versus Solano on Friday.

Against Alameda, mistakes by CCC were minimized and plays were effective. Comet coach Christy Tianero said the team found its rhythm in the second set.

“It went so well. They were actually having fun and communicating. That’s why they were playing so well.” Tianero said.

The Comets were able to capitalize on their offensive rhythm and sloppy play by Alameda to bring the score to 22-21 with Alameda leading the set.

The Comets failed to close out the set as Alameda scored three unanswered points to win it 25-21.

In the third set the Comets fell apart. After scoring two early points to gain their first lead of the evening, the Comets let Bedard score three consecutive service aces against them. CCC tried to come back but the Cougars exploded with a 10-point run.

Alameda leaned on good ball movement of Bedard and setter Ameleah Ceron for its offense.

The Comet offense slowed to a near halt and errors caused the team to give up unnecessary points.

“I don’t even know what happened to be honest,” Comet outside hitter Deanna Craighead (three kills, eight digs) said.

The Comets lacked hustle at Solano and against Alameda. Fatigue overwhelmed them as CCC lost the third set 25-6 and lost the match 3-0.

“They just lost it,” Tianero said, “They lost what they found in the second set.”