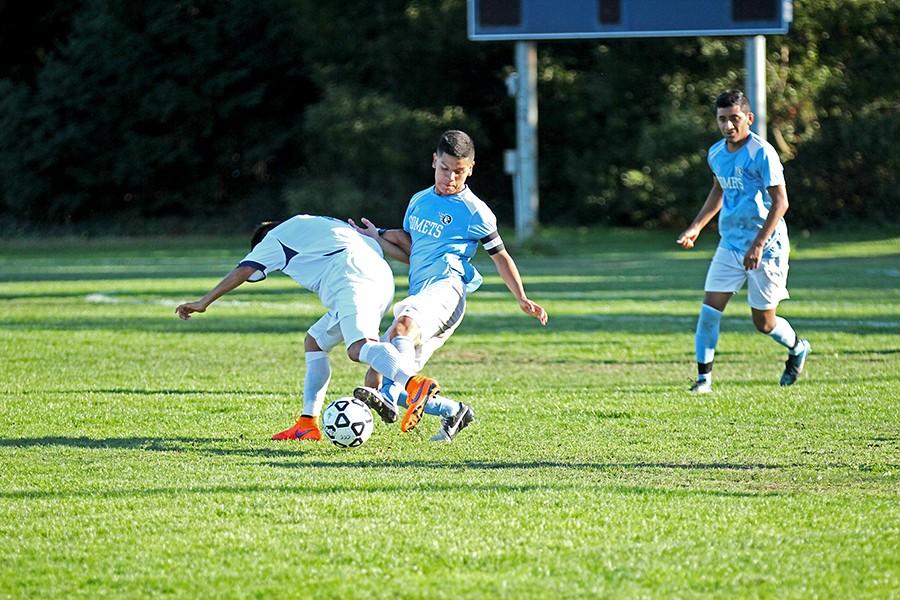 The men’s soccer team held California’s 2nd ranked squad, Santa Rosa Junior College (11-1-1 overall and 3-0 in the Big 8 conference), scoreless through the first half, but ultimately lost 2-0 in its final non-Bay Valley Conference game of the season on Friday at the Soccer Field.

Before the Bear Cubs snapped the Comets’ four-game undefeated streak, Contra Costa College (7-5-2 overall and 3-1-1 in conference) had not lost since its 2-1 home loss against Yuba College (9-4 overall, 5-0 in conference) on Sept. 29.

After being shut out, CCC remains in second place in the BVC standings.

Depending on the results from Tuesday’s conference matches, CCC may have a chance to close the five-point differential between second and first when it visits Marysville to play BVC leaders Yuba Friday.

“Strength of schedule helps but every game is important,” Ferguson said. “At the end of the day you have to play every game like it’s your last — like every game is a playoff game.”

This year, the Comets have faced three of the top 10 ranked colleges, according to the California Community College Athletic Association. These teams are Evergreen Valley College (4th), Lake Tahoe College (9th) and the Santa Rosa (2nd).

With its leading scorer Pedro Rodriguez (third in the BVC with nine goals this season) back on the field after missing multiple games with a sprained foot and fresh off of a two-goal performance against Merritt College on Oct. 13, CCC was poised to bring the fight directly to the Bear Cubs.

The Comets controlled possession with crisp passing as it attempted to find the soft underbelly of the Bear Cub defense throughout the first half, but at 58 minutes Santa Rosa scored.

Reeling back from Bear Cub striker Wilson Briggs’ goal, CCC pressed forward into the attacking third, but quickly had to hustle back to defend a counter attack at 63 minutes.

A Bear Cub break up in the middle momentarily halted in front of the goalie box until Santa Rosa midfielder Marco Barragan’s pass found midfielder Jovani Carolino who shot the ball through a forest of legs past Escamillo and into goal.

Carolino’s goal came just five minutes after Briggs’ to seal a 2-0 away shutout.

“They were a strong team,” Comet sophomore defender Davis Okonkwo said. “I think we played good in the first half — in the second we just dropped the ball.”

Santa Rosa has only given up four goals all season, yet has only scored more than three goals in only two games.

Escamilla is ranked 11th in the state with 58 saves so far this season, according to cccaasports.org

Offensive attempts were not lost for CCC in the first half. At 11 minutes in the game the squad advanced the ball up the field during a 2-on-3 counter attack led by forwards Brian Santos, Bryan Vega and defender Benjamin Reiter.

The trio strung passes between defenders en route to the goal only to have the Comet’s attempt thwarted by Santa Rosa goalie Arturo Ornelas.

The first half ended 0-0 with both offenses unable to score.

In the second half, however, the nagging injuries that plagued CCC began to affect the game.

First, right-winger Comet Hugo Hernandez was benched after a lingering knee injury forced him out of the game. Hernandez collided knees with an opposing player in the Comets’ previous win at Merritt College.

Then CCC’s offensive catalyst and team’s leading scorer Rodriguez tweaked his ailing foot and was forced to modify his play by dialing back his offensive aggression.

“It just wasn’t right like it was before,” Rodriguez said. “If it was anything else I could get through it, but I just can’t plant my foot down correctly.”

After stopping three shots in the first half and three early in the second, a shot by a crossing Briggs from defender Sebastian Huerra just inside of the box put Santa Rosa up 1-0 13 minutes into the second half.

Reeling from the goal and pressing forward into the attacking third, CCC quickly found itself hustling back on defense.

A Bear Cub break up the middle, momentarily halted in front of the goalie box until Santa Rosa midfielder Marco Barragan found fellow midfielder Jovani Carolino who shot the ball through a forest of legs past Escamillo, and into the back of the net.