Lights improve visibility in Lots near Gymnasium, save energy 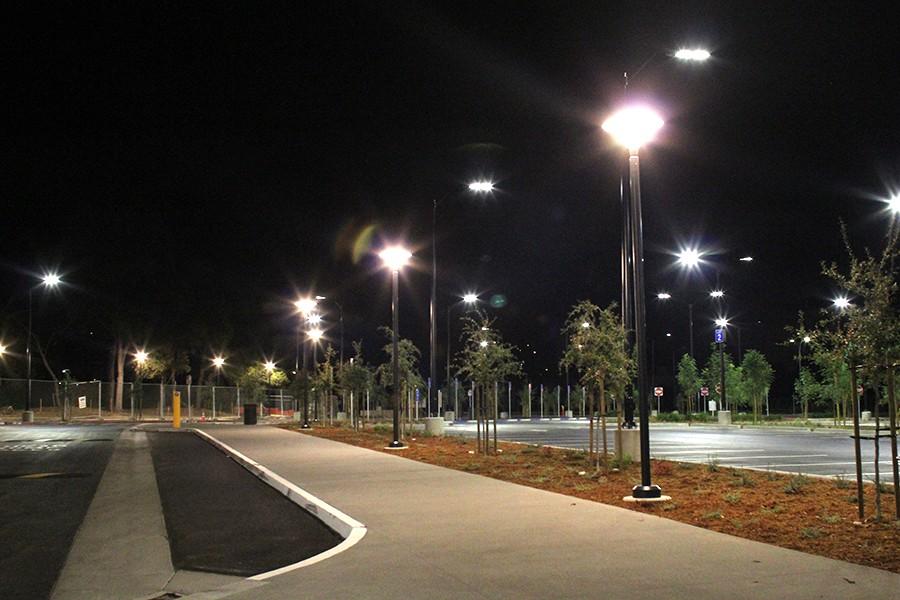 New LED lights have been installed in parking lots at Contra Costa College along the recently paved street near the Student Services Center to increase security for students and save energy and money for the campus. The lights cost approximately $64,000.

Contra Costa College installed LED lights in parking lots along the recently paved street near Student Services Center on Sept. 25 to increase security for students and save energy and money.

The new LED lights cost approximately $64,000, Buildings and Grounds Manager Bruce King said, as part of an architecture plan that transpired after the construction of the two parking lots in summer 2015.

The construction of the two parking lots over the summer encouraged the installation of new LED lights that appear to be much brighter and energy efficient than CCC’s conventional lights.

“LED lights produce more light and they usually last longer,” King said.  “I am encouraging the rest of the campus to switch to LED lighting, as it saves a lot of energy and money that can be used for students’ education. That’s what we’re here for — the students.”

He said LED lights are safer than installing conventional lights. He said it is time consuming and requires a big lifting truck to install, which is unsafe for workers.

CCC’s LED lights “killed two birds with one stone,” he said as they illuminate the parking lots and street for those driving or walking at night, while saving the college’s energy and money.

Senior Construction Manager Alex Gourtzelis said his role with the college is to ensure that lights are provided per the approved plans and specs of the district.

“Everyone pays rate per watt,” Gourtzelis said. “The more watts you burn, the more expensive the price will be. LED lights are power efficient, and burn less watts.”

The LED lights in the parking lots have replaced conventional lighting in some areas, which include Lot 2, Lot 3, Lot 5 and Lot 6.

The LED lights turn on at 6 p.m., which will be helpful for students taking night classes and custodians and faculty who work late nights.

But when time change happens, it will get dark early so the lights will turn on around 5 p.m., he said.

LED lights are easy to discern  between the SSC and Gym because of their black curved design.

“Before the construction of the new parking lots, it was dark and creepy to get to my class,” health and human services major Kathy Insixiengmay said. “Now after the new LED lights, I feel safe.”

There are also low LED lights that serve as pathway lights for students and faculty walking along the streets at night.

Gourtzelis said the college plans to install more lights around the Campus Center and Classroom Building Project that is scheduled to be completed for the fall 2016 semester.