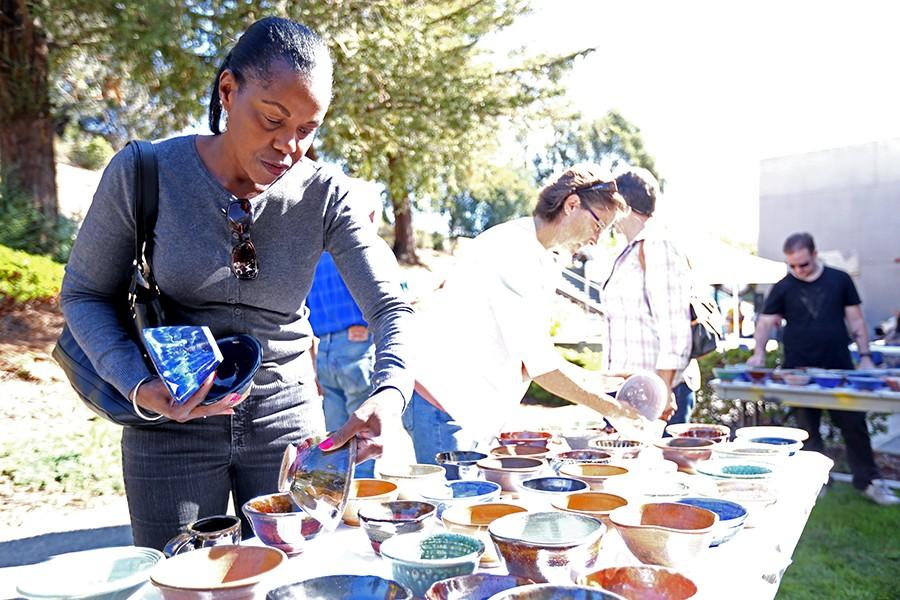 Local resident Denise Maloney examines a bowl during the Empty Bowls project event at the Applied Arts Building Patio outside of the Three Seasons Restaurant on Friday.

Cooperation between the Bay Area Rescue Mission and Contra Costa College has raised $2,221 to fight hunger through the Empty Bowls project.

The Three Seasons Restaurant at CCC hosted Empty Bowls for the fifth time on Friday from 11:30 a.m. to 2 p.m., which is the same day as World Food Day.

Culinary arts department Chairperson Nader Sharkes said, “The event brings the community into the college, and showcases the students.”

Guests had the opportunity to buy ceramic bowls and eat.

Bowls cost $5 for students, $10 for non-students and $10 per additional bowl. Those who purchased a bowl received free soup refills and were entered into a raffle for additional ceramics.

Ceramics professor Mary Law said her students spent the first two weeks of the semester making the bowls — some made by herself and volunteer gratis employees, former students of the class.

Chef Chris Dikes, the Bay Area Rescue Mission’s manager of culinary arts, said he supplies some product for the soups. Sharkes supplies the rest and the students put it together.

CCC provided a van to transport disabled or elderly guests, and the culinary students rolled out a “red carpet” though it did bunch up a bit at the doorways.

Live music was provided by the Hilltop Ukulele Lovers Academy (HULA), a band of volunteers who play for charity events.

Organizer and founding member Jon Cyr, a former culinary arts student and current volunteer at the Bay Area Rescue Mission said the group organizes by mailing list. When need arises he sends word and it is up to members if they want to attend. On this day, 15 Ukulele players answered the call.

When the soup lids came off, HULA opened with a rendition of “All of Me” by singer John Legend and attendees began to choose bowls.

The weather was temperate and sunny, and refills were unlimited. Seats filled up inside and out, with people eating in the restaurant, at temporary tables under awnings and in the patio outside by the redwoods. Laughing, talking and taking pictures, the guests mingled with ceramic artists, culinary students and ukulele players between numbers.

Intermittently the raffle for some of the more valuable ceramics stirred the proceedings. Musician  major Sandy McNeal said, “It’s a fabulous way to combine the excellent arts of the college.”

People lingered at the tables of bowls, turning over and inspecting them. Engineering major Irina Tabor said, “It was really difficult to choose one. I kept going back and forth between five.”

“That tortellini soup, I’ve never seen anything quite like that, and I cook quite a bit myself,”Jack Castro, former CCC student said.

The press of hungry people increased when the cheese bread ran out, then the clam chowder, followed by the tortellini. For a time the beleaguered roasted pepper soup stood alone with butter bread, then only plain bread. The culinary students pushed forward a squash and zucchini soup to fill the empty ranks, and hold the line against the ravening hordes.

Sharkes said, “This is their event. It’s a student event. They perform well under pressure.”