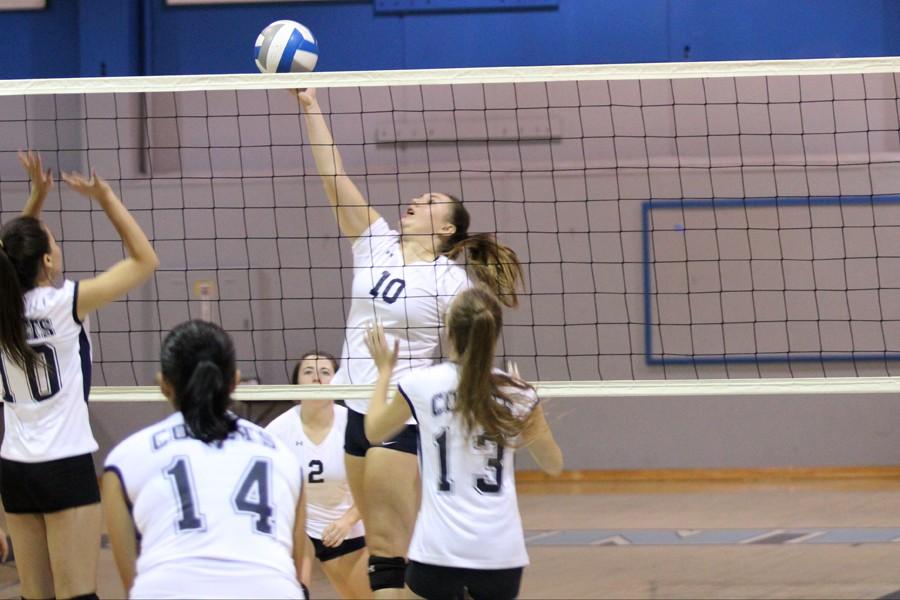 Eagle outside hitter Jamie Mertle tips the ball over the net and Comet middle blocker Mariah Marinho (left) during the game against Mendocino College on Friday in the Gymnasium.

The winless volleyball team showed signs of improvement but failed to fully apply those improvements made in practice to a game and lost again to visiting Mendocino College (4-8 overall, 4-6 in the Bay Valley Conference) on Friday.
Contra Costa College (0-9 overall, 0-9 in the BVC) came into the game facing an Eagle team that was winless on the road. CCC will get another chance to measure its progress against third place Los Medanos College tonight at 6 p.m. in Pittsburg.
The Comets started the first set playing well, keeping the score close early in the set. Mendocino was able to pull away and dominate the end of the first set to finish with a score of 25-12.
“They spot served. It was really smart. They knew where to serve to get to our weak spots,” Comet coach Christy Tianero Said.
CCC came out firing in the second set but Mendocino scored four unanswered points to take the lead at 6-2.
The Comets responded with four unanswered points of their own to knot the set again at 6-6. Mendocino quickly took control, stringing together aces and drop shots to regain the lead at 14-7. Tianero was forced to call her first timeout of the set.
Tianero said she called the timeout to talk to her team and get them ready to finish the set strong.
But the decision had the opposite effect as Mendocino maintained control and scored 11 unanswered points.
CCC had little answer for the serving of Mendocino led by defensive specialist Gabby Baker. Struggling to receive serves and a lack of communication overall for the Comets allowed Mendocino to win the second set 25-7.
The third set started off as a near replay of set two with the score even at 2-2. Mendocino jumped out in front early scoring eight unanswered points.
CCC played a better offensive game in the third set moving the ball around and putting pressure on the Mendocino defense. Communication issues put the brakes on any momentum the Comets gained throughout the set.
Toward the end of the third set CCC was down 20-11. Middle blocker Alejandra Galvez (seven kills, three digs) helped give the offense energy with two kills late in the set.
Poor defensive communication allowed Mendocino to win the set 25-17 and the match 3-0.
Despite the loss, Galvez said she was happy with how the team played and is improving. She said the team communicates much better in practice and they just need to better apply how they play in practice to the game.
Right side hitter Amy Palomares (two assists, four digs) was also happy with how the team played. “It was a good game. We’re still learning our rotations and still learning each other. We are getting better.”