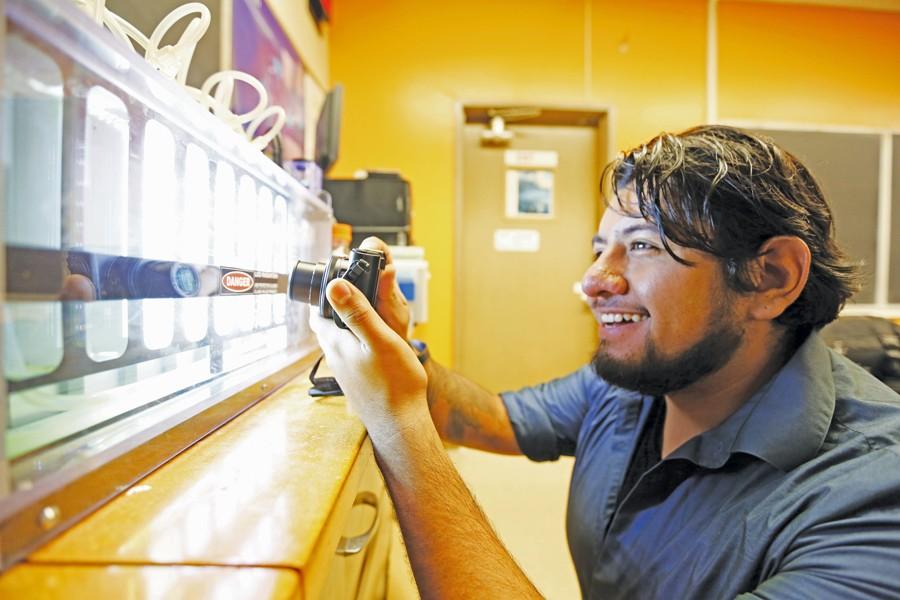 Biotechnology major Ray Serafin takes a photo of a bioreactor that cultivates algae in B-18 at Contra Costa College in San Pablo, Calif. on Monday, Oct. 26, 2015. Serafin is interested in capturing scientific procedures and enjoys displaying his photos for the public.

Young passionate scientists work to bring progress to this world, and one 28-year-old student hopes to capture that passion, through his unique point of view.
Ray Serafin is a biotechnology major with a passion for photography.
“I really love photographing scientific procedures,” Serafin said,”I feel like it’s something a lot of people don’t get to see.”
Serafin said coming out of high school he was always interested in biotechnology at a basic level. But beyond that he could never see himself becoming involved in the field of science.
He said he always loved science, but never nurtured the interest. Now he is able to commit to it.
This is Serafin’s third semester and he is once again a full-time student. He said he attended Contra Costa College on and off for a three-year period and didn’t come back until he was 27. During that time he did a lot of in-home care.
“I owe coming back to working a dead-end job,” Serafin said. “If I’m going to be somewhere every day I want to do something rewarding.”
When he was away from school science took a back seat. Losing touch with it made him want to return.
Upon his return he gravitated toward biotechnology.
“I really like how early on into genetics we are. I feel like we have tapped into something really big and are just coming to the door. It’s an exciting aspect to me,” Serafin said. Serafin returned to CCC and found his passion for science rekindled in biotechnology program coordinator Katherine Krolikowski’s biology class. He said Dr. Krolikowski played a big role in starting him on his new path. In addition to his mother always urging him to go back to college, it would seem he found a match on his return. He took it as a sign.
Krolikowski is also Serafin’s mentor through the Center for Science Excellence. “He has a real knack for asking insightful and tactful questions,” Krolikowski said, “He arrives into class with a winning attitude and a smile.”
Serafin spends a lot of his time being ensconced in a scientific environment. He volunteers in the biology department. He helps get glassware cleaned and sterilized as well as preparing equipment for classes.
Physics and astronomy department Chairperson Jon Celesia said Serafin made an impression on him. He said Serafin was always a positive and inquisitive student. Celesia said he has the feeling Serafin will go somewhere in his life with his work ethic.
Serafin interned last summer at the United States Department of Agriculture. He worked under Dr. Jennifer Lewis preparing model organisms. The organisms were infected with a virus in order to identify proteins used to defend themselves. Krolikowski said he was a total professional during the process and was able to apply the hard work he put in at CCC.
Being a biotechnology major necessitates a lot of time and dedication. Serafin spends a typical day in his precalculus, biological science and chemistry classes. “It is a little stressful but I thrive with having a lot to do,” he said.
He said biology is his focus right now. When he is doing science, time seems to fly by.
Serafin said he gets his love for hard work from his parents. His father came to the United States from Mexico at the age of 16 and had Serafin at 19. By the time Serafin was 7 years old his father owned his own business. His mother was a college educated woman with a degree in tourism and economics.
“They were very hardworking. I attribute my desire to work hard to what I saw growing up,” Serafin said.