‘The Rock’ valiant in face of danger, education

Speech professor translates supportive will into his daily campus routine 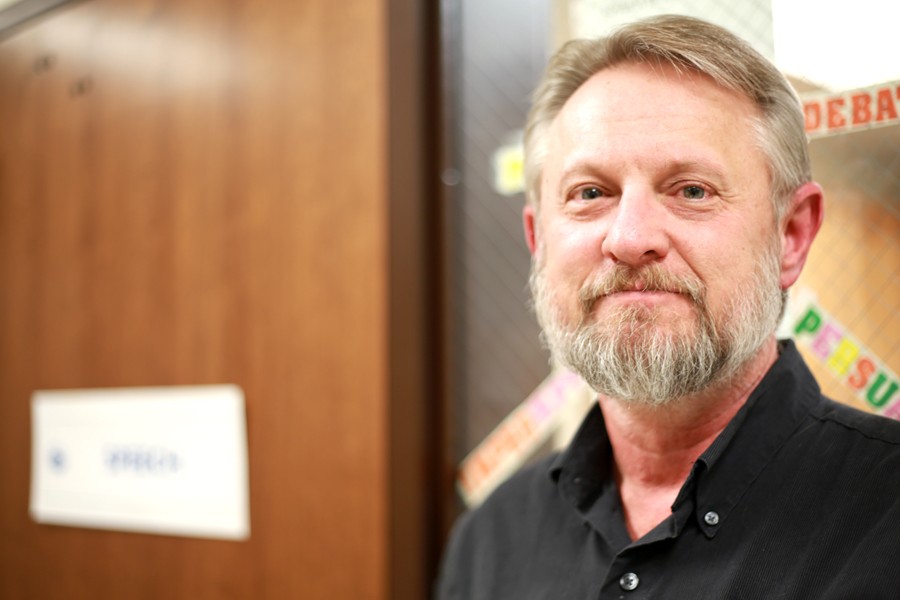 Speech professor Hans Craycraft led an adventurous life in his previous profession as an investigator for EBMUD over a 21-year period before coming to Contra Costa College.

When a fire has already rolled through an area, that area becomes surprisingly safe. The fire rages nearby, hot enough to melt aluminum, but here there are just smoldering cars, the occasional burning gas line and an investigator with a mission.

Contra Costa College speech professor Hans Craycraft was an investigator for the East Bay Municipal Utility District (EBMUD) for 21 years, investigating the odd, the dangerous and the dull, in the name of making our water get where it needs to go.

“I just kind of fell into it. It wasn’t any kind of great plan,” Craycraft said. “The first eight years, I spent building pipelines.”

Once you know how the pipelines work you can be an investigator, he said. An investigator’s job is to be the EBMUD’s eyes and voice.

“We had radios and they would tell us to go places and check things out. I would work with the fire chief, (and) I had to go to all three alarm fires,” Craycraft said.

“I found myself on the nightshift quite a lot. The shift rotates, but I always seemed to be on nights. (I was) working in Richmond, Berkeley and around the East Bay — from Hayward to Crockett,” he said. “There were a lot of adventures that I had as an investigator that were one of a kind, (but) it wasn’t always a heart-pounding adventure. It could be boring.”

“I had a thing in North Richmond one night. A woman had cut her wrists, taken poison, jumped in her car and driven off with her eyes closed,” he said.

She hit and broke off a hydrant. The water shooting up at 1,500 gallons per minute was damaging power lines overhead, he said. Workers couldn’t get close safely and couldn’t see what was going on in the torrent of whitewater.

Craycraft said, “I took a vehicle and slowly drove it blind and backwards over the hydrant. That water is heavy.” A car hitting that wrong would flip over.

The fire chief walked alongside because Craycraft couldn’t see.

Craycraft said, “When the force comes down on you it’s intense.” The roar is too loud for people right next to each other to talk.

The pressurized water broke the rear axle differential of the heavy truck, but the flow was diverted enough for workers to get close and shut off the water.

“The water company plays a big role in these things, whether it’s the big fire, or the big earthquake, or whatever,” Craycraft said. “When you’re out there you’re by yourself. When the fire department or whoever call you for help, you need to have answers for them. Sometimes it was quite pressing, they need answers now, not in half an hour.”

In 1991 he responded to a call from an elderly woman. Craycraft said she was scared because she had heard funny noises behind her house and she said, “This house is all I have. I don’t know what I’d do without it.”

He couldn’t find anything wrong, and told her so.

“She expressed to me that she couldn’t lose (the house), so she was being extra careful. I tried to assuage her fears,” he said. “Two days later the fire monster came and swept it all away.”

It was the Oakland Hills Firestorm.

“It was by coincidence I was there. It was one of the days I was on dayshift,” Craycraft said. “I called it in on my radio. The dispatcher told me to wait, said the supervisor was in the bathroom. I said, ‘Go in the bathroom and get him.’

“It was a tough day, it was a long day. Smoke was so heavy it turned day to night. I couldn’t see the tops of the hills.”

The fire was driven by hot 70 mph winds. Craycraft said, that in one place he was monitoring when the firemen had to pull out.

The firemen had to cut the hoses from the hydrants to free their firetrucks and flee, he said.

He said, “It must have been 7 or 8 o’clock at night. They needed someone to drive through the fire (to manually check the status of Amito Reservoir).”

Craycraft and another investigator drove through the fire to Amito Reservoir above the Claremont Hotel. The reservoirs were running out of water for the firefighters, and “we couldn’t pump to the reservoir because the (power) lines to it had burned through,” Craycraft said.

He could see the fire burning toward the Claremont Hotel.

On the hill past the main fire he said he was surrounded by small fires. “(There were gas) pipes belching out like flamethrowers, smoldering cars with aluminum drooling out the bottom and burning remains of buildings all around. Everywhere I looked for 360 degrees I could see burned homes. Hundreds in every direction,” he said.

It was just a short distance from where the worried elderly woman lived. He said, “The center of the fire was within maybe two blocks of where her house was.”

After a total of 29 years at EBMUD Craycraft hit retirement age, and it was time to end his sometimes dangerous work. But, Craycraft said, “I didn’t want to just sit home and watch TV.”

Craycraft changed careers, and has taught at CCC since fall 2001.

“I was concerned whether being an inside sort of paper pusher would provide the daily adrenaline. It’s just as exciting in a different way,” he said.

Speech department Chairperson Sherry Diestler said, “We lovingly call him ‘The Rock.’ He’s always willing to help. He goes to the tournaments, even out of state, to encourage the students, for very little compensation.”

Speech professor Joseph Carver said, “He likes to go deep with everything. He always pushes students at least one level deeper than they expect to go.”

Speech and debate team member Alfonzo Ramas said, “I hope he keeps teaching. I see the drive in him to educate.”

Diestler said, “He will create useful classroom handouts and share (them) with all of us.”

Craycraft said, “I need a little action/adventure in my life or else I’ll get bored. Life as an investigator is more of a physical adventure, while teaching is more of an intellectual adventure.”