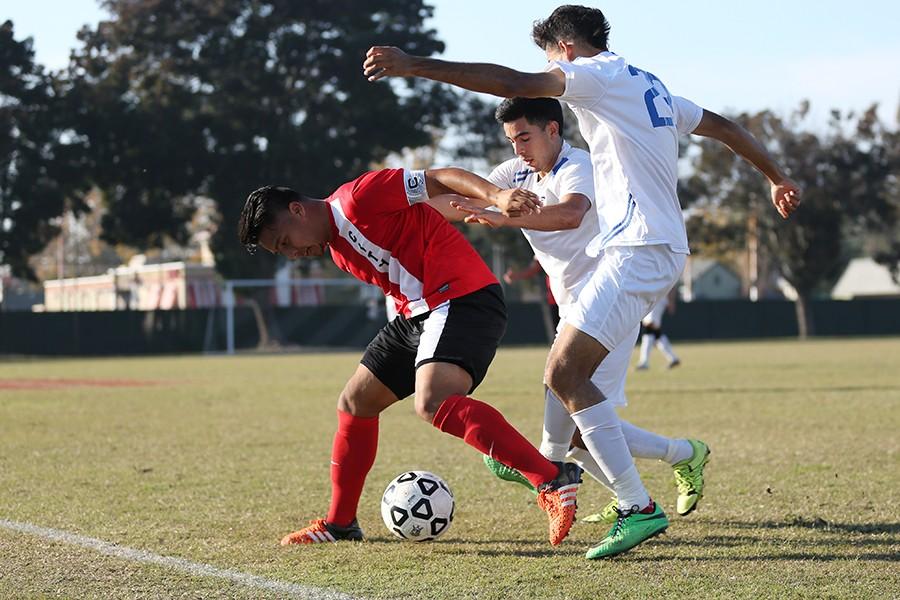 FRESNO — The Ram’s scored four goals during a seven-minute stretch in the second half to smother the men’s soccer team’s chance of progressing further into the 2015 NorCal Regional playoffs.

Once the Ram’s center attacking midfielder Sergio Segura scored the first goal of the game at minute 60 from a free kick, the Comets’ defensive backline positioned itself higher up the field to support its attacking players as they pressed for a tying goal.

Instead of scoring, the Comet’s pressure high up the field exposed them to speedy FCC counter attacks — which generated three more goals by minute 67 to secure the 4-1 final score.

“It’s tough to go on the road and win, especially in the playoffs,” Ram’s coach Eric Solberg said. “But (the Comets) kept themselves in the game until the 60thminute — when a team scores the first goal it is easier for it to score a second.”

At minute 70, the Comets trailed 4-0 despite their defense only allowing opposing teams to score more than two goals in three of their 22 games played in the 2015 season.

“All it takes is one goal,” Comet coach Nikki Ferguson said. “When you worked hard to make it to the playoffs, getting scored on took a moment to soak in because of all the blood, sweat and tears shed to get here.

“Going down 1-0 was mentally draining, especially when the score was 0-0 at halftime.”

The Comet’s seven-minute defensive collapse sealed consecutive losses in the first round of the NorCal Regional playoffs against the same team — last year FCC shut out CCC 3-0.

“It was a hard fought game,” Solberg said, “better the last time we played. (The Comets) are moving in the right direction. If (CCC) found a goal first it would have been a whole different game, but thankfully we had good runs at the start of both halves.”

Under a clear sky and the roar of the Rams supporter’s section chanting “Let’s go FCC, let’s go,” the Rams and the Comets struggled to find an offensive flow throughout the first half.

“This game was a battle between two good teams,” Ferguson said. “It was just a matter of who was going to capitalize on a mistake first.”

The pivotal goal was scored in the second half from a free kick 20 yards out from the goal, forcing the tempo of the game into a counter-attacking frenzy.

“When we went down a goal it was a shock,” Ferguson said. “We have been talking about this game from day one this season.”

At minute 60, the Comets fouled a FCC attacking player just outside the penalty area to cede a free kick.

“We did not stay disciplined enough,” Comet center defensive midfielder Jesus Villagrana said. “The foul committed near (the penalty area) cost us the whole game.”

Segura bent a blistering left-footed shot up and around the Comet’s free kick wall from the right side of the penalty area.

Segura’s shot curved just past outstretched Comet goalkeeper Eduardo Escamilla before dipping into the left upper corner of the goal.

“It hurt,” Escamilla said. “No one in the Bay Valley Conference has ever taken a shot on goal like that — It was a real wake up call.”

A minute later, FCC stopped a Comet attack in the midfield. On the counter, Segura ran into space inside the penalty area to tap the lobbed pass, delivered by the Ram’s center defensive midfielder Ulises Ramos, over Escamilla and into goal.

FCC capitalized on the Comet’s errors in the midfield twice more to score at minutes 64 and 67.

“We sort of broke their spirit by scoring three goals in four minutes,” Solberg said.
“But during the last fifteen minutes (the Comets) played their butts off. I saw (Ferguson) yelling ‘keep fighting — don’t give up’.  I was impressed.”

At minute 80, the Comets pressured a Ram turnover in the midfield. Comet striker Byran Vega received a pass and dribbled into the FCC half of center field to send a forward through pass on the ground to Comet center attacking midfielder Jorge Avina streaking toward goal.

Morales shot the ball first time to curve it low, in between the left post and the Rams goalkeeper Jon Pulido’s fingertips, to breath some life into the Comet’s struggling offense.

After the Morales scored the Comet’s only goal with ten minutes remaining, the Ram’s parked the bus to see out a 4-1 final result.

Despite the final score, Ferguson said he is proud of the team’s progress since he took the position as coach of the men’s soccer team two years ago.

“We have a lot of personalities on our team,” he said. “I am proud of our sophomores and what they have accomplished in the last two years; earning consecutive playoff spots and winning the BVC Championship this year.”