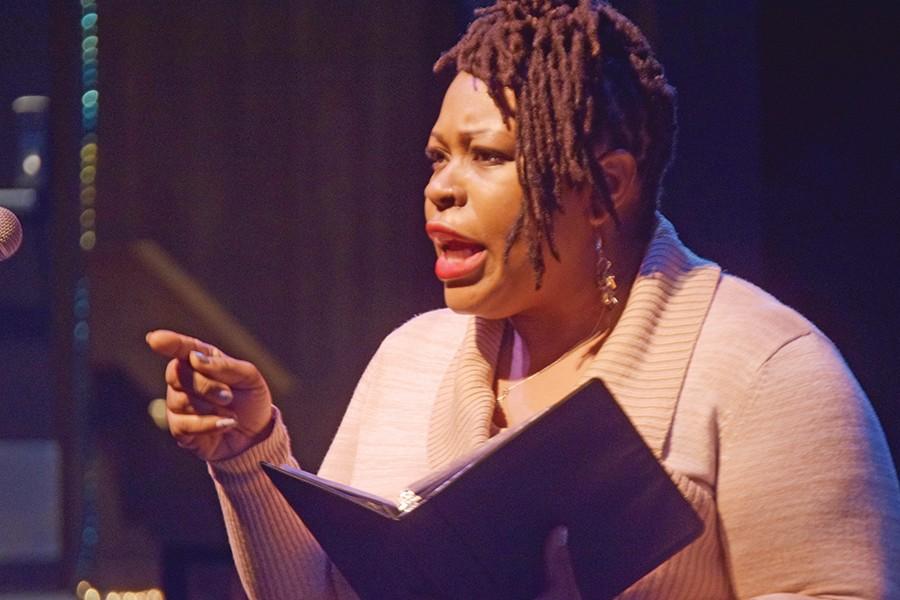 Lerecia Davis, a student speaker performs an oral interpretation during the Student Speaker Showcase at the Knox Center on Nov.17. She discusses the difficulty of explaining police brutality to her children.

The Student Speaker Showcase held in the Knox Center on Nov. 17 featured students using the medium of speech to entertain, provide insight, and spur thought-provoking conversation between attendees.

The night began with a healthy-sized crowd waiting in their seats ready to hear the first speech.

After a short introduction by speech and debate team coach Randy Carver, the night began with an oral interpretation of literature.

After the strong start to the night, a short film by student filmmaker Sakeema Payne was shown.

The film showed the speech and debate team’s recent trip to Reno, Nevada for a speech competition.

Payne’s presentation was an interesting look into the team members and their extensive preparation. Speech professor Sherry Diestler said she hopes the film will encourage students at Contra Costa College to join the team.

Speech and debate team member Richard Pinkard took the stage for an impromptu speech. He was given a topic and had only two minutes to prepare a five-minute speech.

Pinkard said the speech was hard and preparing in front of such a large audience created difficulties. Despite the formidable task, he was able to deliver a speech with a clear structure.

Pinkard said to do well with an impromptu speech he needs to relate the quote given with people, connecting the dots to make the speech clear.

After the impromptu speech, varying types of elocution were displayed.

Student poets and authors performed an oral interpretations about the struggles of urban youth, while two students performed a comedic scene from a play.

The penultimate performance of the evening was by guest speaker Ady Abbott. She performed an oral interpretation from her own solo show.

The crowd laughed consistently throughout Abbott’s performance. The production is a good example of what can be done with a speech, Diestler said.

To cap off the night, six students took the stage for a parliamentary debate.

The debate topic was the lack of food options on campus and possible solutions to it.

Carver said the topic was relevant to the campus community and got the crowd involved.

The affirmative team, consisting of Johana Gurdian and Richard Pinkard, proposed expanding the Three Seasons Restaurant as a solution. The opposition team, consisting of Wyllene Turner and Alfonzo Ramos, countered by proposing food trucks as the solution,

Prior to the debate, Carver told the audience to interact and cheer or boo.

The audience complied giving lively reactions. The energy of the crowd flowed into the debate. As the crowd showed more energy the debaters fed off that energy.

Gurdian said the parliamentary debate was fun. The mood was much more relaxed than a competition debate but the crowd’s energy made the debate more enjoyable.

The night ended with Carver wishing the audience a farewell as the audience members left the Knox Center with smiles on their faces after an engaging evening.

“All of our students really came through and presented well. Each of them brought a different feeling,” Carver said.