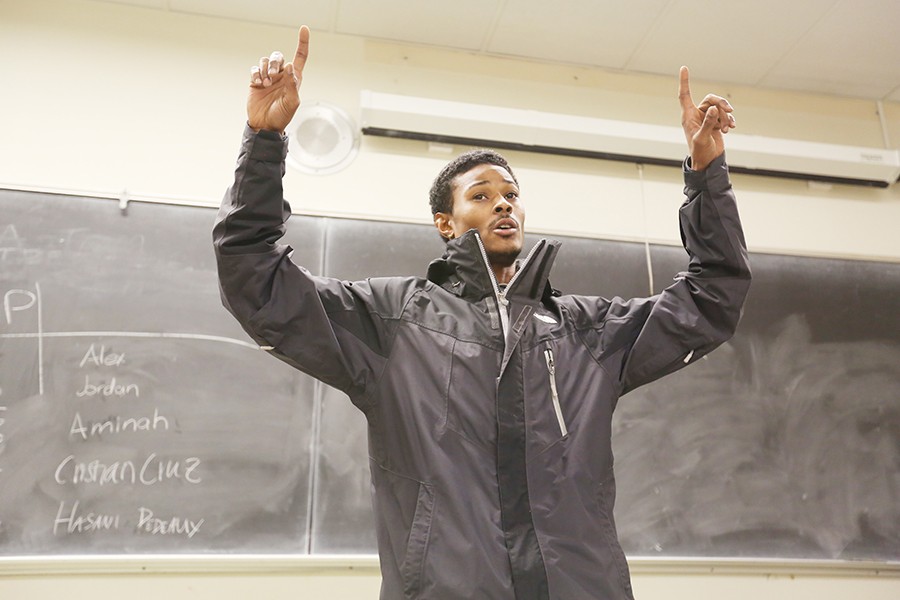 The speech department gave Contra Costa College students a chance to showcase their speaking skills and express themselves in an Intramural Speech and Debate Tournament on Thursday.

The Intramural Speech and Debate Tournament was hosted in the Liberal Arts and Applied Arts buildings, where students presented their performances in different rooms depending on their chosen type of speeches.

“It’s a nice experience and you have the chance to express yourself and work together in a friendly environment,” he said of the speech team.

During the speech tournament, students waited for their names to be called by a judge. Participants were categorized by speech faculty or by their propensity for public speaking.

“The unborn child has developed most parts of his or her body — the hands, feet, and brain,” Ramirez said “It’s really atrocious to know how the abortion process goes.”

She said at the first procedure, doctors jam scissors into the baby’s skull, and then comes the evacuation process, where they use surgical instruments, such as vacuum aspiration, to grab parts of the body of the fetus and “rip them apart.”

Ramirez emphasized that she wasn’t arguing for banning abortion completely.

“There needs to be a valid reason for a woman to get an abortion, such as having her life at risk. Not any woman can choose to abort her unborn baby.”

In keeping with topics that weigh heavily on the minds of the American public, student speakers touched on a wide array of topics.

“Anger can drive a person to commit a crime,” he said. “Shootings I’ve heard of at universities, such as the shooting rampage at Virginia Tech University, forced me to support gun control laws.”

“Giving everyone guns leads to registered and unregistered ones being procured, which can place individuals at risk of getting shot.”

She said, “Students seemed less nervous than many of the students I’ve seen (before). I advise students to introduce the sources they get their information from when listing facts or examples.”

Rubin said she’s currently taking a Speech 141 course, and she’s enjoying the class. “Communication studies have been my interest for as long as I can remember,” she said. “I’ve taken speech courses, and, as a result I’ve gained and learned skills which led Professor Sherry Diestler and Joseph Carver to select me as a judge for the tournament.”

She said Diestler, Carver and others in the speech department organized the Intramural Speech and Debate Tournament.

Santos said that he, along with other speech and debate team members, assisted the speech instructors to organize the event.

“I made sure the classrooms were situated properly. It was a cool experience,” he said, referring to the different classes students had to attend to present their speeches.

All the rooms arranged for the speech presentations were posted on a wall in the Liberal Arts Building, listing different types of speeches, such as informative, persuasive, impromptu and others.

Some of the students in the tournament are participants in the speech and debate club, and others joined to speak for an extra credit opportunity in their speech classes.

Thiongave said that if it weren’t for the extra credit opportunity his speech instructor provided to everyone in his class that he would not have participated in the Intramural Speech and Debate Tournament.