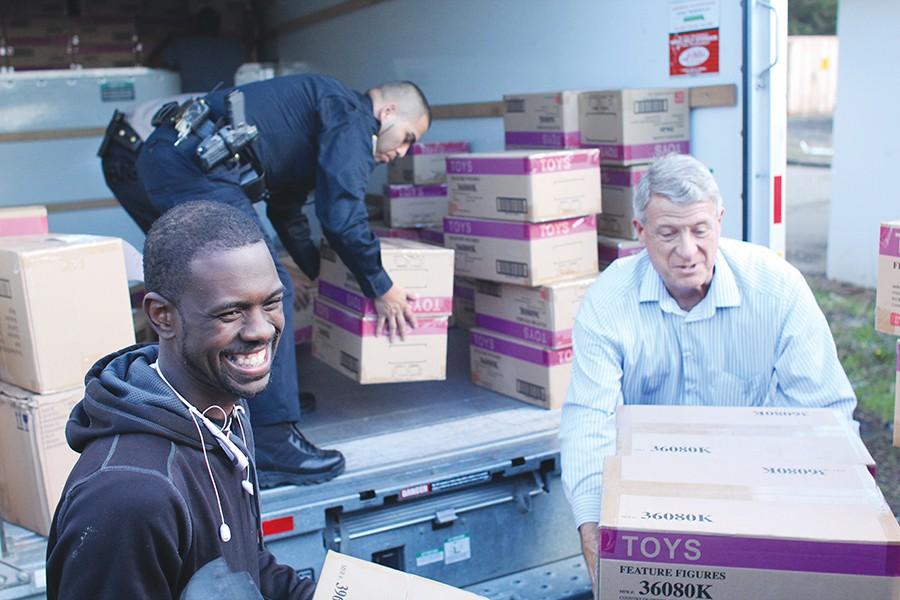 The sixth annual Contra Costa College Toy Drive is looking to have its biggest year ever as it provides toys to needy families throughout the Bay Area this holiday season.

Police Services Officer Tim Thomas and Corporal Charles Hankins have been working on the toy drive since its inception. While it started as a drive on this campus only, it has spread to Diablo Valley College and Los Medanos College too.

This year the drive has expanded to working together with the Early Learning Center and EOPS on campus.

Thomas said he wants the drive to keep growing and sees where he can take this fundraiser. Thomas said the drive is looking to collect upward of 10,000 toys.

Speech department Chairperson Sherry Diestler is instrumental in helping the Bay Area Rescue Mission organize the Toy Drive on and off campus.

Diestler said she works with the volunteers at her church, Willow Springs Church, to wrap gifts that will be given to families during the Christmas party thrown by the rescue mission in the Richmond Civic Center Auditorium on Dec. 23.

Tausend said the effort by the Willow Springs Church is bigger than last year. The goal for this year is to wrap 3,000 gifts. He said this expanded effort brings in a new geographic area into the Toy Drive.

Tausend said the efforts of Thomas as well as the increased effort of Willow Springs Church in Moraga could at least double, or possibly triple, the number of gifts that can be distributed.

Not only are the efforts of the toy drive going to help the Bay Area Rescue Mission, Thomas said he will also be working with the Contra Costa County Sheriff’s Department to deliver toys to families all around Contra Costa County on Dec. 9. He said Toys for Tots in Concord will be distributing toys as well.

Thomas said several thousand toys will also be received by his long time friend Patrick McClellan in the Los Angeles area next week. Thomas and Hankins said they will drive down to Los Angeles and bring the truckload of toys back to the Bay Area.

The toy drive began when Charles Gibson, the former district police chief, asked each officer to find a community project.

“I started a program called S.T.A.R. which stands for Student Together Awareness Response,” Thomas said. Under this umbrella he began the toy drive, which Thomas said Hankins jumped at the opportunity to help his fellow officer.

“We started (the Toy Drive) at CCC, but each year it kept growing,” Thomas said.”This year will be the first year we work with the Early Learning Center and Extended Opportunity Program and Services.”

Thomas said he wants to work more with DVC and LMC to get the Toy Drive to be more important within their campus communities.