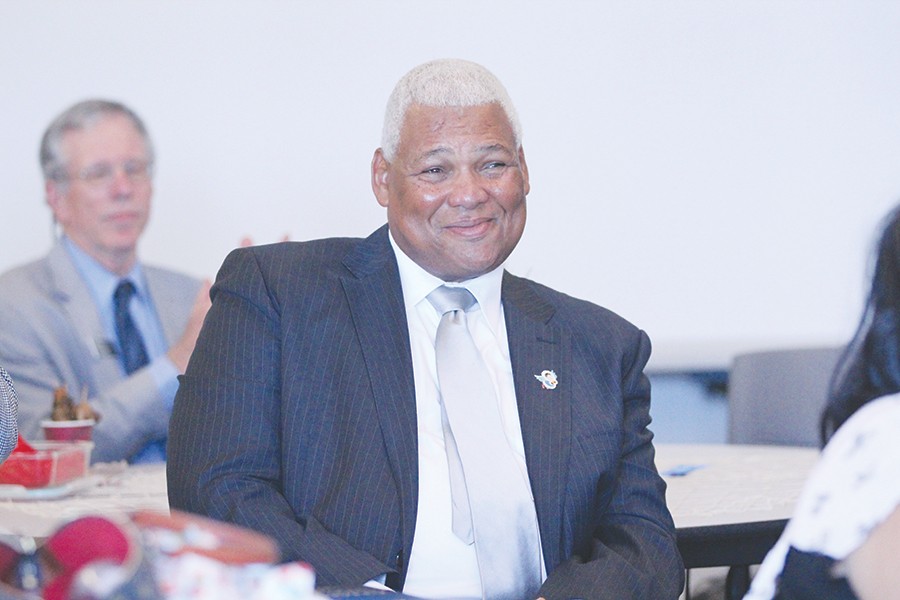 Former district police chief Charles Gibson listens to friends and family talk about his storied career as chief and as a police officer during his retirement party at Diablo Valley College in the Diablo Room on July 30.

The James Earl Jones-like voice and presence of a well-noted police officer will no longer grace the offices and hallways of the Contra Costa Community College District.

Former district police chief Charles Gibson retired on July 22, but he still serves in the capacity of administration of justice adjunct professor here on campus by teaching three courses on the subject.

“I’m satisfied with the contributions I made as police chief,” Gibson said. “It has been honor and a privilege to serve the students (over the years).”

Gibson is leaving his full-time position after almost 10 years and with plenty of experience under his belt prior to him even starting the role as district police chief.

“I started out in the Oakland Police Department and I remember growing up idolizing a family friend, named Gregory Jacobs, a police officer who looked just like me,” Gibson said.

Gibson said he realized through his early years that police are not bad folks, but are good people. He remained at OPD for 30 years, six as a jailer and 24 as an officer.

He said part of his reasoning for being a cop was carrying the metaphorical torch to ensure that African-Americans and minorities could pursue a career in the criminal justice field and that they too could become police officers.

“(Jacobs) provided a friendly environment for my community and strived for positive relations within. So naturally community outreach was my main focus.”

Contra Costa College Interim President Mojdeh Mehdizadeh said Gibson has a great presence when he walks the campus because of his genuine concern for students and his ability to connect with them as a communicator.

Interim District Police Chief Chad Wehrmeister said Gibson is professional, but it is hard not to get close to him as his kindness spills over because he cares about his employees while also not afraid to show it.

Gibson, a New Orleans native, joined the Navy as a young man and spent two tours of duty in Vietnam from 1972 to 1975, which he said gave him the opportunity to grow as an individual and travel.

“(Serving in the Navy) was of course an eye opener no matter where you are,” Gibson said. “People are people, but after the Navy I fell in love with California. The last station I was in was Alameda and afterward I got a job in the city of Oakland as jailer.”

Gibson said he enrolled at the College of Alameda after the men’s basketball coach witnessed him playing ball and invited him to join the team.

Although unsure at first because of his full-time work schedule, Gibson said he was persuaded and eventually transferred to Cal State-East Bay after earning his associate degree and graduating with a bachelor’s degree in administration of justice.

Gibson said he continued to play basketball at Cal State-East Bay and it was there he met his wife, who was the athletic trainer.

“I met my lovely wife because she was the athletic trainer employed at the time I was playing ball and she used to wrap up my ankles after games and now I get to wrap my arms around her,” Gibson said.

“Oakland was an amazing city to serve. Being part of the OPD equates two years of service to five years because of the high call volume. With all those activities happening it provided an insurmountable amount of experience that allowed me to move up in the ranks as I prepared eventually, in some aspect, to become the police chief of CCCCD,” he said.

Gibson said, “You can’t teach experience, you have to live it. And to have the experience of managing people was an extraordinary opportunity.

Gibson cites the experience of managing urban unrest in forms of protest, and other rowdy behavior, as what prepared him for his later role.

“It was a natural transition as I spent 30 years in Oakland. So it was time to change and I thought maybe I want to teach and so I took the opportunity to do so.

My life has been planned and the plan has been followed and I’ve been constantly in service — serving has been my life.”

District Police Services Officer Tim Thomas said, “One thing I took away from the chief is the value of your education.

“Particularly for African-Americans, it is important to graduate and get your degree. (Gibson) inspired me to finish college and he was, in some ways, a father figure to me.”

Thomas credits Gibson for inspiring him to work at the college.

Gibson said, “I’m proud of the diversity that I brought to the district and the organization’s (Police Services) need to reflect the college community it serves. I’m proud it does.”