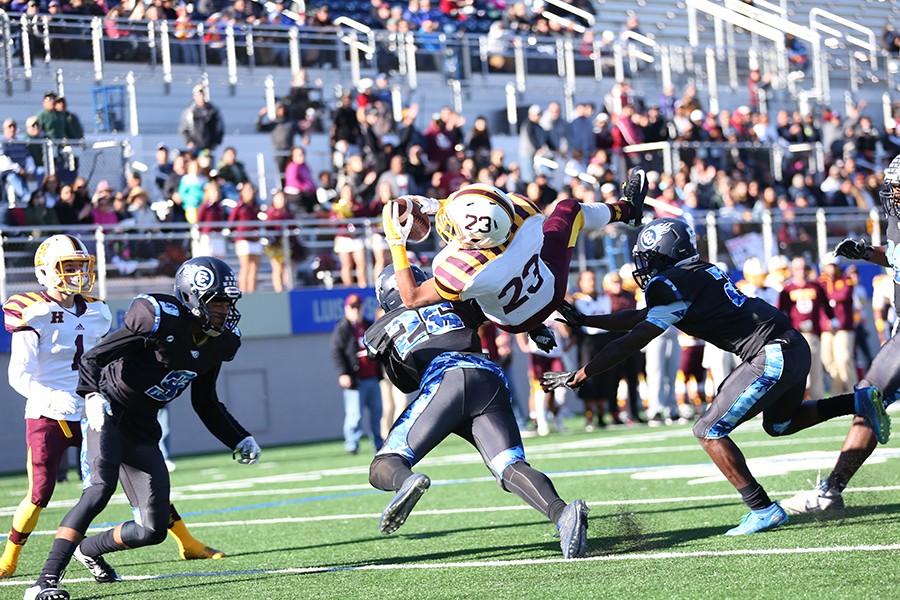 LEFT: Comet defenders swarm to tackle Hartnell running back Marcus Washington in hopes of forcing a fumble during the Living Breath Foundation Bowl in Salinas on Nov. 28.

SALINAS — The 2015  Comet football season started with promise, but ended in less than ideal circumstances as the team lost 41-28 and failed to repeat as Living Breath Foundation Bowl champions at Hartnell College (10-1 overall and 5-1 in the Gold Coast conference) on Nov. 28.

Before the young Contra Costa College squad (9-2 overall and 5-1 in the Pac 7 Conference) had a chance to adjust to the magnitude of the situation, the Hartnell quarterback dumped the ball off to his running back leading the Panthers to their first score of the day.

“I felt they were a little more focused and hungry,” Comet coach Alonzo Carter said. “For the first time our youth showed. Not that we played badly. We just played young.”

Although many offensive categories between the two teams were nearly identical, (Hartnell with 19 first downs to the Comets 20 and CCC’s 276 passing yards to the Panthers’ 274) those similarities were not reflected on the scoreboard.

Holding a 7-0 lead halfway through the first quarter, the Panthers put themselves in position to score once more before the beginning of the second.

Early in the game, the Comets struggled offensively. If not for the efforts of freshman running back Harris Ross (17 carries 137 yards), CCC would not have been able to sustain its offensive drives for as long as it did.

“We have a young team and it was the first time in that situation for some of our players,” Ross said. “Our collective energy level was lower than usual before the game.”

Late in the first quarter, the usually reliable freshman signal caller for the Comets, Cameron Burston (16-37 for 276 yards two TDs), committed the first of his two turnovers — the second was just his third interception of the season.

On the fumble, Burston used his signature scramble to buy time, loosely carrying the ball in one hand prepared to throw as he had successfully done in so many contests this season.

Taking the snap from his own 30-yard line, Burston scrambled to his left where CCC had three receivers. But electing to run he was promptly hit from behind. The tackle ejected the ball out of his grasp and into the possession of the Panthers.

Hartnell quickly converted and ended the first quarter up 14-0 by way of a 16-yard touchdown reception.

The Comets soon found redemption when Burston threw to receiver Malcolm Hale (5 receptions, 84 yards, one TD) for a 22-yard touchdown.

Hartnell would answer. But instead of scoring through the air, its next two scores would come on the ground. The first was a 14-yard rushing touchdown and the second a 12-yard scamper to close out the half.

“Halftime was the turning point,” Comet defensive lineman Chima Onyeukwu said. “We realized that we would lose if we kept playing sloppy. Because of our team’s youth they didn’t understand the circumstances.”

Even the kicking game was not on par with the Comets’ usual prowess. All-conference kicker Lorann Fonseca missed both field goal attempts — one was blocked and the other hit the bottom of the crossbar.

The only score of the third quarter came on a 15-yard touchdown play to give the Panthers a 34-7 advantage to begin the fourth quarter.

“People who usually show up didn’t show up,” Hale said. “We knew that they had a lot to play for. (Hartnell) came into the game hostile.”

As the day grew long, the Comets began to realize the depth of the hole that it had dug for itself. The only score allowed was on another check down to the running back who darted 43 yards into the end zone.

“It was a lack of pride and heart,” all-conference Comet defensive back Nico Hurst said.