Careless use of app behind the wheel possibly devastating 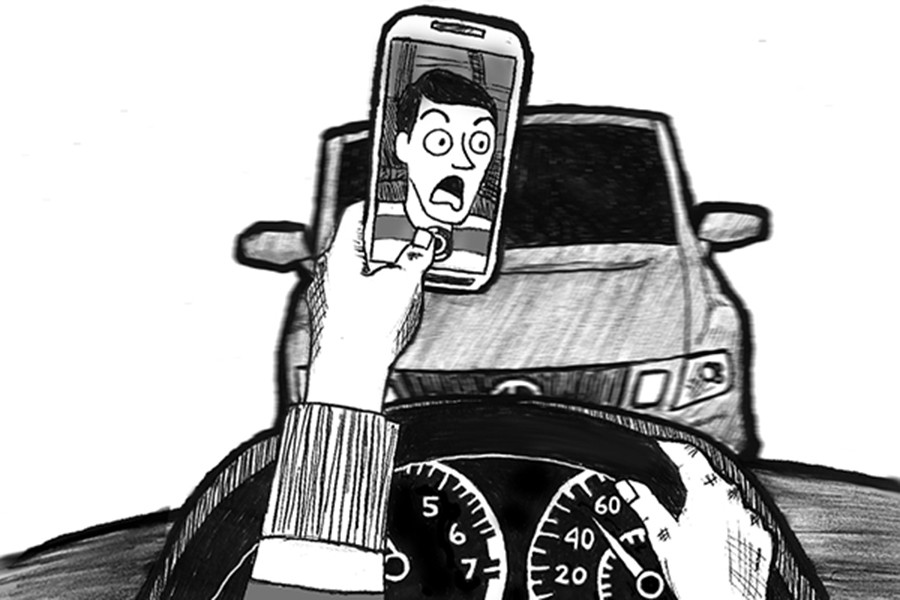 Many people know that using a cellphone while driving is dangerous. It is against the law and there are constant advertisements about how dangerous it can be to just glance at a cellphone for just a second while driving.

Well it seems that people have forgotten that rule when it comes to entertainment. Drivers, young and old, are aware of the popular social media app Snapchat, an app for people to take a quick picture or video and send it to friends for a couple seconds before it vanishes forever.

The app is greatly used for people to share what is going on in their day-to-day life without the commitment of having it be there for long periods of time, unlike popular picture app Instagram. It’s a quick snapchat of anything that’s going on. People can post whatever they want for the day and by the next day it will be gone.

There are more than 100 million Snapchat users worldwide according to Business Insider and the number of users is increasing daily.

As the app gains popularity, more people seem to become reckless with the app. It seems that people just want to constantly show friends that they are doing something. Which is completely OK — there is nothing wrong with sharing — but the problem seems to be when people tend to use the app carelessly.

A habit has now become common among Snapchat users while driving. Drivers will record themselves with music in the background and become careless. I’ve had friends guilty of doing this with the app. While it maybe cool to be driving somewhere and showing people where they are, I get quite worried for their safety.

Everyone knows the dangers of using mobile devices while driving and know that it is against the law. Yet that doesn’t seem to stop users.

According to distraction.gov, drivers in their 20s make up 27 percent of the distracted drivers in fatal crashes. Mobile devices are distracting our young generation and it’s putting their lives and the lives of others at risk.

I don’t know why people still seem to use devices while driving? Perhaps it’s confidence. Many people actually believe that an accident can’t happen to them or they know what they are doing because they have experience driving.

The saddest thing is most people don’t take the dangers of using a phone app while driving seriously until they are affected when a family member or friend is seriously injured.  Then the guilt starts to set in and it must be the worst feeling in the world I assume, being that the accident could have easily been prevented if the driver refrained from picking up his phone while behind the wheel.

It’s quite upsetting, but I also think it is quite selfish of someone to be so careless while driving. How could someone have no regard for other people’s safety, or their own?

The average time a driver’s eyes are off the road while on a phone is about five seconds. When driving at 55 mph that’s like covering a football field blindfolded according to distraction.gov. That’s a lot to cover in a short amount of time. So when drivers think that they are capable of checking their phone while their eyes are on the road, they really don’t.

Driving and using cellphone apps is a talent that a person should not risk their life to perfect. Its also been said that cellphone use and driving could be the equivalent, if not more dangerous than, of driving under the influence of alcohol.

Maybe the law should enforce stricter cellphone use policies while driving. If the price of a ticket for using a cell phone while driving is raised maybe that would also put some fear into drivers so they would think twice about using their cellphones so recklessly.

I don’t know what the fuss is all about with Snapchat and using it while driving. It’s not going to make much of a difference if people know where others are going. I’m all for Snapchat and yeah it is pretty cool that different locations have different filters for every city.

I love Snapchat. It’s a great app and I might even be a little addicted to it at times. I like posting things about my day-to-day life. I like posting songs and silly things. It’s fun showing people I’m at a concert or at a party. I like viewing the additional accounts the app comes with.

Showing friends a quick snap is easy, but when others are putting their lives at risk to show what they are doing it’s not very fun. All I can think about is how dangerous it could be and the consequences of what could happen if one variable slips.

As the holidays are approaching it gets a bit more nerve-racking as more people are on the road rushing to work, to the family reunion or to buy that last minute holiday gift. It’s important to be more aware of the road and other drivers.

I’m sure with this season more drivers are going to want to show they are going home for the holidays or going to parties. I think that it’s best if they just leave all the Snapchatting for when the driving is over.