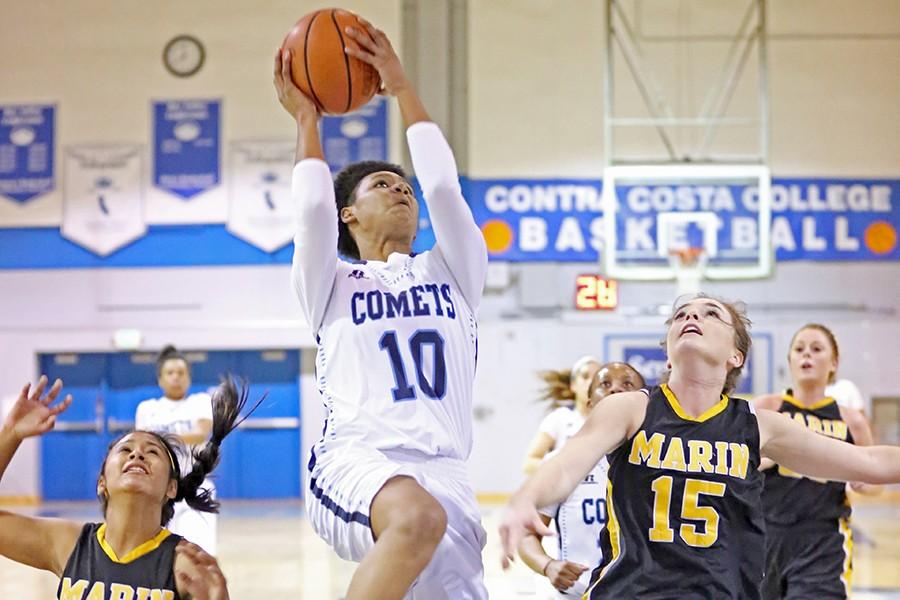 Comet guard Jacqie Moody goes up for a layup against Mariners guard Janelle Pansoy and foward Christiana Onwuasoeze during Contra Costa Colleges 80-57 win against College of Marin in the Gymnasium on Friday.

After its 85-71 win over second place Laney College, the women’s basketball team (17-8 overall and 7-0 in the Bay Valley Conference) made quick work of an unprepared College of Marin squad by snatching its seventh consecutive win on Friday in the Gymnasium.

The Mariners (3-15 overall and 2-5 in the BVC) hit the court confident, as if the six remaining Comet players on the roster would not be able to maintain a competitive edge — or the final 80-57 score.

After jumping out to a quick 7-2 lead the Comets failed to secure rebounding positions and allowed the Mariners to fight back to tie the game at 11 all as time wound down in the first quarter.

The Mariners were paced by guard Monica Vasquez who tallied 12 points and seven rebounds.

With roughly one minute left in the first quarter, Comet sophomore guard Daizah Pounds (11 points) nailed a 3-pointer from the wing. Following a defensive stop, CCC point forward Julian Robinson (19 points, 14 rebounds and seven assists) blew by defenders to make a lay up.

“We just try to keep in mind our team goal to keep improving no matter what team we play,” Pounds said. “Our focus is still the postseason.”

Sophomore Jacqie Moody (31 points, 14 rebounds) dominated the majority of the game, although her performance was nearly overshadowed by that of Robinson who was just three assists shy of a triple double.

“When our post-to-post action is working, it’s beautiful,” Moody said. “(JuJu) Robinson wouldn’t shoot. She just kept feeding me the ball and telling me I was open.

“Having fewer players makes us  streamlined, it makes us all have to focus more. It drives it into our minds that we have to stay strong.”

Moody was virtually unstoppable in the post and with the help of forward Briah Davis (two points, 12 rebounds) kept the Mariners from establishing any semblance of an inside presence.

A 3-point play by Moody with seven minutes remaining in the half gave the Comets a 24-13 lead and a double-digit advantage that would not be relinquished for the rest of the game.

The Mariners failed to gain their sea legs to start the third quarter as Robinson picked up right where she left off by nailing another mid-range jumper.

With Robinson using her dribble-drive to draw multiple defenders then dishing the ball to Moody, space was cleared for sophomore guard Tynisha Adams (17 points, 10 rebounds and seven assists) to get shots in the paint with some dribble-penetration of her own.

CCC built on its halftime lead and ended the third quarter 60-42.

Before the game, women’s basketball coach Paul DeBolt said he was not worried about Moody stepping up to the challenges his team will face as the season winds down.

Moody continued to clean the glass but also expended vast amounts of energy. And considering the Comets facile roster depth, stamina will continue to be a factor.

The Comets get a bit of a break in the way of a late season bye week, due to Los Medanos College canceling its 2015-16 women’s basketball season.

The time to re-tool could not have come at a better time as the Comets are set battle three of the top four teams in the BVC to close out the season.

CCC will face Solano College on Feb. 12 in the Gymnasium and travel to Marysville to play Yuba College on Feb.17 in preparation for a rematch against Laney College in Oakland on Feb. 19.

Without looking past Marin, the Comets cruised through the fourth quarter giving the Mariners no hope of making any scoring run to get back in the game.

“We wanted to work on things that we haven’t been doing well recently,” women’s basketball assistant coach Ebony Young said. “Tonight it was about execution and adjusting on defense.”

Outscoring the Mariners by at least five points in every quarter and controlling the offensive and defensive glass allowed the Comets to make quick work of their opponent en route to a  80-57 victory.