Team’s drubbing of Cougars poises it for playoff shot 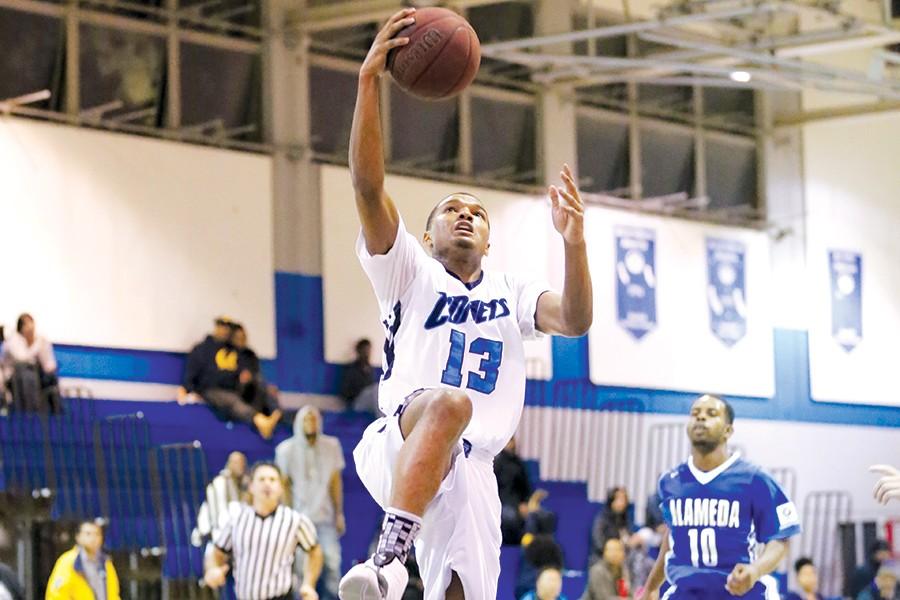 Comet guard Anthony Sullen jumps up for a layup during Contra Costa Colleges 102-83 win against the College of Alameda in the Gynasium on Sunday.

The men’s basketball team protected its position as the eighth ranked team in the state by notching its eighth win in a row with a 103-82 drubbing of the College of Alameda (2-20 overall and 0-9 in the Bay Valley Conference) on Friday in the Gymnasium.

Contra Costa College (19-6 overall and 8-1 in the BVC) has slipped into a comfortable rhythm since conference play started and is now in first place in the BVC — ahead of College of Marin by two games.

With only one BVC loss and winning 16 of its last 18 games, the team is poised to make a push for the playoffs with only three games remaining on the conference schedule.

“It’s a constant pursuit for perfection,” Comet coach Miguel Johnson said. “We approach each game like it’s just another game on the schedule. I try to make sure it’s not about the other team — it’s always about us.”

In Friday’s matchup, the basement dwelling Cougars came out playing with purpose to knock down a 3-pointer at the onset of the game.

“I felt like this was a good game. I had my mind right, looked through my Bible before the game,” Alston said. “I was feeling it. I had a good vibe — I felt like I was free.”

The conference leader tightened its defensive grip on the Cougars early in the first half. Following a CCC guard Rae Jackson (7 points) block that sparked a break leading to a Jackson lay up, the home team led 25-15 with 12 minutes left in the first half.

“This is not one of our toughest opponents. Some would say it’s a cupcake game,” Jackson said. “They (Comet coaches) want us to play tough defense and rebound and execute the offense if we are not running. No one-on-one tonight.”

The Cougars set their claws in an attempt to contain the Comets offense and not let the contest get out of hand. Alameda capitalized on some of CCC missteps and cut the lead to six as the up-tempo Comets were slowed by the rapid succession of referee whistles.

Both teams had earned 10 fouls with three minutes remaining in the first half.

With the score closer than expected and six minutes remaining in the half, 28-21, the Comets produced a series of acrobatic plays through guard Anthony Sullen (17 points) to spark a 21-10 run to end the first half.

At halftime the Comets led the Cougars 49-31.

Seemingly intent to ground their opponent into the hardwood, the Comets opened the second half with a 7-0 run. Alameda’s first made shot of the half was on a desperation buzzer-beater as the shot clock ticked to zero.

“We had the same game plan. We just executed on defense in the second half,” Comet forward Larry Wickett (17 points) said. “The defense got better as the communication got better on both ends. When everyone gets involved we play more like a complete team.”

The buzzer beating shot would only serve as a false symbol of hope for Alameda.

Following CCC’s impressive second half spurt, the Cougars seemed to accept their fate as the Comets barreled along to combine for a 29-point lead by way of a 20-9 scoring run.

With 12 minutes remaining, and the score at 69-40, life could be seen draining from the Cougar players along with the collective hanging of their heads.

With the BVC’s second place College of Marin hosting CCC tonight, the Comets were happy to walk away from Friday’s game with no injuries after their 103-82 victory over Alameda.

In that game the CCC scoring attack was led by point guard Bobby Syvanthong with 16 points. Sullen contributed 14 points, 12 for Jackson and 10 for Wickett and freshman point guard Dwight Wilson.