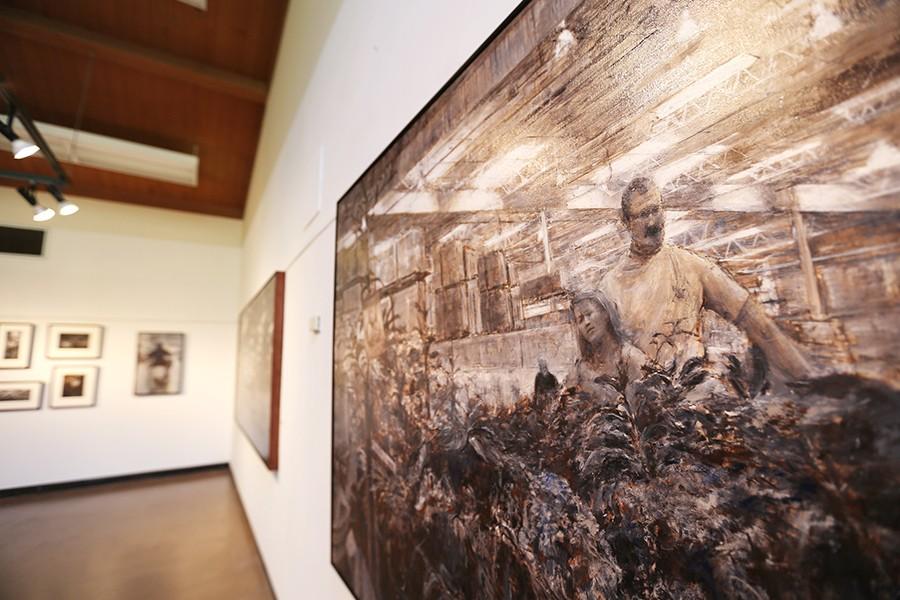 Artist Debby Miller’s oil paintings hang in the current Eddie Rhodes Gallery exhibit, “Look Homeward: Shades of Costco.” It focuses on the devaluation of symbols during an age of commercialism and will be up until March 4.

Art provides individuals with a new perspective toward commonplace actions and symbolic figures in retail spaces.

Currently in the Eddie Rhodes Gallery, the exhibit “Look Homeward: Shades of Costco” features oil paintings made by artist Debby Miller. The artist’s reception was held on Thursday from 4 to 6 p.m.

Art professor Dana Davis, who curates for the gallery, works as a photographer for Miller and invited her to display her pieces at the college. This particular show will be up until March 4.

“Costco is so frequently visited that it becomes prosaic and you wouldn’t think that as a place of inspiration when creating art,” Davis said. “But when you look at this exhibit, Miller has given this ordinary and worldly place a sense of magic.”

When studying art, there are techniques and exercises students should practice and memorize.

Miller has been working on this art series for the past two years. She said the techniques she learned give her freedom to portray what she wants in her artwork.

Davis said although practicing often may not be easy, seeing a huge set of paintings together like Miller’s exhibit may help students realize what they can accomplish.

“Art has two things,” Davis said. “The recognizable hook, which is Costco here, that makes your viewers stop. Second is the ambiguity, forcing them to investigate what is in between.”

The centralized theme of the exhibit uses Costco as a familiar backdrop to depict the devaluation of symbols during an age of commercialism and reflect on the culture of materialistic fulfillment.

Miller said, “It’s the opposite of the environment at a farmers’ market, where there’s a sense of relationship between others as interacting with fresh fruit. At Costco, those sensory things are set aside so you can get what you need.”

While the paintings portray common sightings within the “big and complicated space,” Miller said the dark palette highlights the mercantile environment and adds value and depth to the composition.

“Costco is a recognizable place, just a nuts-and-bolts space. (The limitation of color) makes it more for your imagination than of an actual setting,” she said.

Upon entering the room, a painting opposite to the gallery’s door invites entering viewers with an elongated perspective of customers eating at Costco’s infamous red and white sitting area.

Albany artist Janet Monfield said, “It’s unusual how (Miller) captures the truth in a way. Not by how it looks, but she captures the feeling of being there. In the painting, you don’t really see the faces which is similar of how you would act at Costco.”

Marin artist Janet Bogardus said this painting was one of her favorites because of Miller’s use of a deep red and bold white against a dark background.

“There’s a lot of beauty in the picture even though it is a bleak sight. People look so down to earth in (the painting) just by their posture,” Bogardus said. “It goes with a theme of what is a meal for modern Americans compared to what it used to be decades ago.”

Miller said the paintings are reflective to the current economy. Costco is essential because “they have good prices and good products.” An individual can go there to buy their groceries, furniture and decor all in one place.

Walnut Creek artist Marianne McCraney enjoyed a painting of a glimmering white chandelier hanging at the corner of a metal shelf with a blurred out price tag against a muddy background of a gridded ceiling.

McCraney said the chandelier is reminiscent of its elegant depiction in earlier paintings by other historical artists.

Monfield’s perspective regarding the wholesale store is now changed since viewing Miller’s artwork.

“Costco will never be the same for me now. It makes me want to look more closely when I go there,” Monfield said. “I think it’s amazing seeing how an artist can portray something ordinary, yet it can affect our views.”