BVC Champion’s sage voted as Coach of the Year 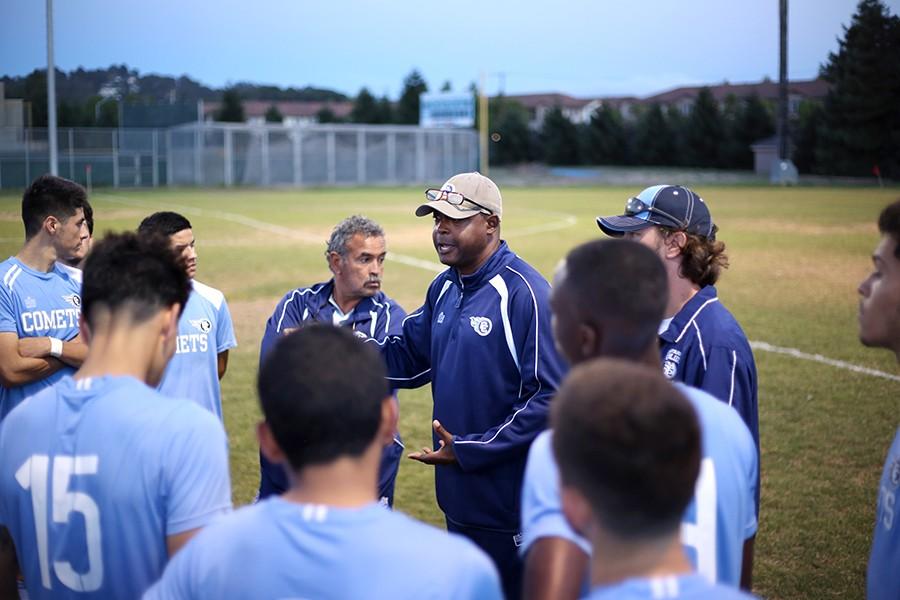 Comet coach Nikki Ferguson gives his squad an impassioned speech before taking the field under the lights at the Soccer Field. Ferguson was Bay Valley Conference coach of the year.

The men’s soccer team failed to seal a playoff berth or win a Bay Valley Conference Championship for almost a decade prior to the now BVC Coach of the Year taking control of the program in 2014.

BVC coaches voted Comet coach Nikki Ferguson as the best in the conference for leading Contra Costa College to its first BVC title in 10 years and a second consecutive playoff spot.

“(Ferguson) deserves the award,” freshman goalkeeper Eduardo Escamilla said.  “He works hard with his players and always made us think of the soccer team as a program and never as just a team.”

While the Comets (12-6-4 overall, 8-1-3 in the BVC) lost 4-1 in the NorCal Regional Playoffs in the first round to Fresno City College on Nov. 21, their overall performance was an improvement from the season before — in which CCC was handed a 3-0 shutout by the same team when it reached the first playoff round.

Ferguson said while he was glad that he was named Coach of the Year, he is more proud his players will be able to “relish in the culture and history” they have brought back to the program over the last two years.

“He was very calm after that loss (to the Rams),” sophomore Comet defender Alejandro Gonzalez said. “He was proud of us. It was a big step for us to make playoffs two years in a row while winning the conference title this year.”

The Comets longest losing streak was three. These stats provide a reflection of Ferguson’s philosophy and culture that the players in the program have adopted.

The philosophy proved to be successful as three Comet players were recognized by the CCCAA for outstanding play.

“It’s hard as a player to accept losses and keep a positive outlook on what’s really ahead of us,” Escamilla said. “If there is a negative mindset there is no growth. Losses and frustrations are part of the game, but he helped us learn how not to linger in the past.”

Gonzalez said Ferguson was able to stick to his technical philosophy in the midfield from the start of the season even though players took a while to adjust.

“I was shocked to hear his style of play,” Gonzalez said. “He had some weird ideas, but should take full responsibility for our achievements because at the end of day we got good results — and that’s what matters.”

Ferguson’s wife, Dean of Student Services Vicki Ferguson, said while soccer is part of who he is, his passion really is helping students succeed in reaching their career goals.

“Coaching isn’t all about the game,” she said. “Yeah it’s where his passion comes from, but it’s focused on providing a right of passage for the youth.

“Coaching is not all about knowing what drills and plays to run. It’s about teaching life skills to students through teamwork, and problem solving,” Vicki Ferguson said.  “These critical thinking and communication skills that athletes learn on the field can be applied off the field for them to be successful reaching their goals.”

“(Ferguson) helped me a lot,” Gonzalez said. “He saw I was struggling, but told me to keep pushing forward. I’m a shy guy, but he showed me I’m capable of doing whatever I want to do in life if I keep trying.”

Despite CCC being the only men’s soccer team among its sister colleges Diablo Valley College and Los Medanos College, Athletic Director John Wade said Ferguson has rekindled a strong connection to the community that surrounds the CCC campus by “capitalizing on a wealth of talent.”

“We have the smallest campus in our district,” Wade said. “But when we are talking about soccer, we are nearly giants.”

“We played to represent not only the program or the college, but our community as well,” Escamilla said. “It’s where most of us come from, San Pablo and Richmond. We grew up here. We played for our community and did better because we wanted to show the world what we are made of.”